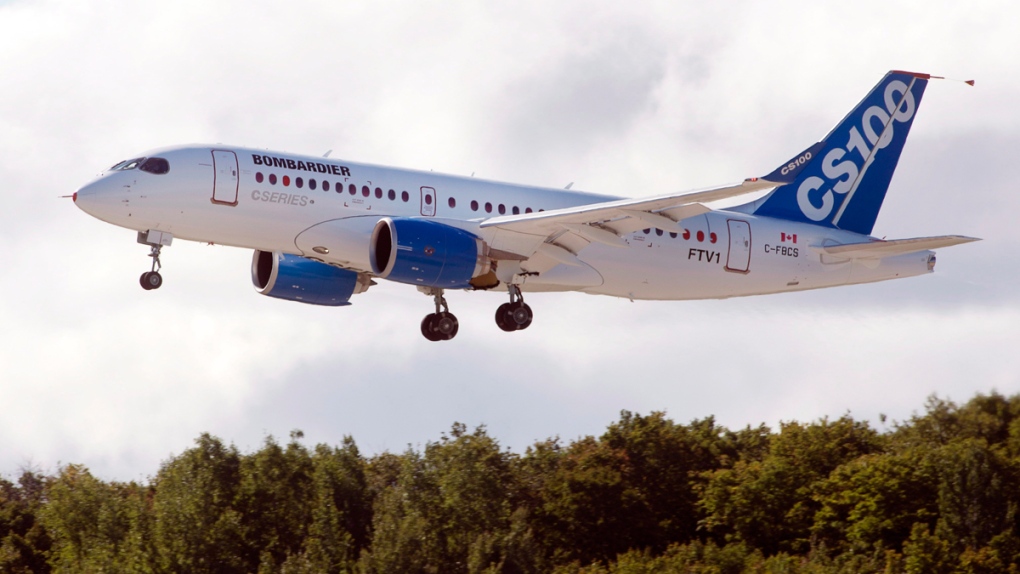 Bombardier's C-Series100 takes off on its maiden test flight at the company's facility Monday, September 16, 2013 in Mirabel, Que. (THE CANADIAN PRESS / Ryan Remiorz)

MONTREAL -- Bombardier Inc. will contribute up to $225 million to the C Series partnership with Airbus even though the agreement giving the European aircraft manufacturer majority control is closing earlier than originally planned.

When the agreement was announced last October, the Montreal-based company was required to fund the C Series until closing -- forecast sometime in the second half of 2018 -- and up to US$700 million in cash shortfalls over the next two years as it ramps up production.

Under the final agreement with Airbus announced Friday, Bombardier has also committed to fund the program until the July 1 closing and contribute up to US$925 million in cash shortfalls through 2021.

Total spending on the program remains in line with the company's original guidance and protects it from paying cost overruns, said Bombardier spokesman Olivier Marcil.

Asked why Bombardier isn't getting some relief because of the early closing, Marcil said it was part of the negotiated general conditions.

"We had already planned to spend it in the context of ramping up production," he said in an interview.

Bombardier will receive non-voting shares of the C Series partnership through a cumulative annual dividend of two per cent.

Any excess shortfall during these periods will be borne by the partnership's shareholders.

"It is clear that in the early phase of the ramp-up there is still lot of investment to do . .. . But looking forward, I am very confident that the C Series is going to contribute positively to the cash generation of Airbus in the future," Harald Wilhelm, Airbus chief financial officer, said in a media conference call Friday.

Bombardier will work with Airbus to ramp up production on the C Series passenger jets, which were designed with improved fuel efficiency and less seating capacity than most passenger jets offered by Airbus or its rival Boeing.

The C Series partnership's head office and main assembly line will be located in Mirabel, Que., and a second line -- to be built after construction starts in 2019 -- will be based in Mobile, Alabama, to service the U.S. market starting in 2020.

C Series deliveries are expected to double this year from the 17 aircraft in 2017 and the program is positioned to capture a large chunk of the estimated 6,000 aircraft needed in this market segment over the next 20 years.

Bombardier said that, as of July 1 when its second quarter begins, the C Series will not be included in its consolidated results -- meaning, among other things, that revenue from the plane's sales won't be included in financial statements.

Closing of the partnership represents an opportunity to unleash the full potential of the C Series program, said Benoit Poirier of Desjardins Capital Markets.

"We also believe Airbus will play an important role in terms of unlocking new orders and ramping up production to meet the strong demand for the aircraft," he wrote in a report.

Bombardier issued revised financial estimates for 2018 to reflect the finalized Airbus agreement, which was achieved several weeks earlier than anticipated after the companies received all necessary approvals.

Poirier raised his target price for Bombardier shares 26 per cent to C$6 from C$4.75, expressing confidence that Bombardier's management will deliver on its 2020 objectives to improve profitability.

Investment Canada reviewed the deal and Bains said he is satisfied it will "benefit Canadians by growing our aerospace sector and creating good jobs.

Bains also said the decision to maintain Mirabel as the primary site for the C Series program is "fantastic news for the talented women and men working in that important aerospace hub."