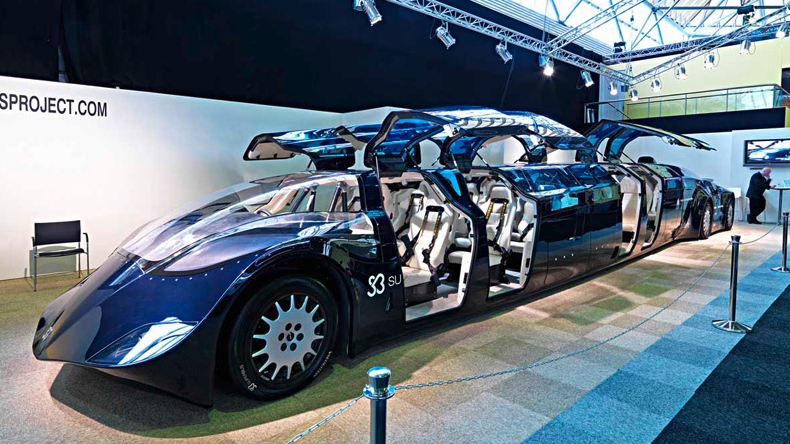 The Superbus, a sleek 15 metre long bus that has seating for 23 passengers, is seen in this image.

Travelling long distance by bus is usually everyone’s last choice, which is sometimes made necessary only by extreme poverty. Engineers in the Netherlands, however, have built something that might actually make bus travel exciting and extremely fast. They call it the Superbus and it’s designed to cruise at 250 km/h – that’s 155 miles per hour.

This is no dirty old diesel with a dog painted on the side. The Superbus is a sleek 15 metres long and has seating for 23 passengers. It has 16 gullwing doors and the luxurious cabin is supposed to be like first class on airliners. It’s built mostly of lightweight carbon fibre and is powered by electric motors driven by lithium polymer batteries. Driving range when fully charged is about 210 km.

Does it sound ridiculous and incredibly dangerous to be going down the highway at 250 km/h? Well, yes and no. The builders of the bus say it should be operated on a special concrete roadway for the Superbus only. That sounds expensive but it’s a lot less expensive than building a high speed railway. And secondly, big cars travel at 250 km/h every day on the speed-limit free stretches of the German autobahn.

I’ve driven at 250 over there and while it scares the hell out of you it is possible. The Superbus is so loaded with sensors and guidance equipment that it pretty well drives itself; so you wouldn’t be too worried about having someone like me at the wheel.

The Dutch government put up most of the money for this thing – the equivalent of nearly $20 million – and the Superbus has been shown around Holland including on a race track. So far there seems to be little interest in taking it beyond the demonstration stage and there are no plans to build special roadways and put it into service in that country.

However this year it was put into a big cargo jet and flown off to Dubai for a transportation show. With all their oil billions they already have the world’s tallest building and now there’s some interest in having the world’s fastest bus service. There is some talk about putting it into service between Dubai and Abu Dhabi. They could turn the 120 km trip into a half hour drive.

No feasibility studies have been done yet for the Abu Dhabi-Dubai route, but a similar Amsterdam-Groningen route has been studied by the Dutch government. The Dutch didn’t buy into it but money flows more freely in the Emirates.

It’s an interesting idea because a bus like this could pick you up wherever and travel on normal roads at normal speeds until its gets to its special lane and then whoosh. Then it’s almost travelling at the speed of a turboprop aircraft yet at a lower cost. It would get me excited about taking the bus although I’d certainly be hoping we wouldn’t hit snow if it were in the winter.

High speed ground transportation doesn’t have to take place on rails. The idea of travelling 250 km/h in a bus takes some getting used to but I’m certain it could be made safe. I wouldn’t be at all surprised if some cities somewhere gave the Superbus a try. The Dubai – Abu Dhabi run sounds perfect.