'Your legacy is in good hands,' Obama tells vets at D-Day memorial 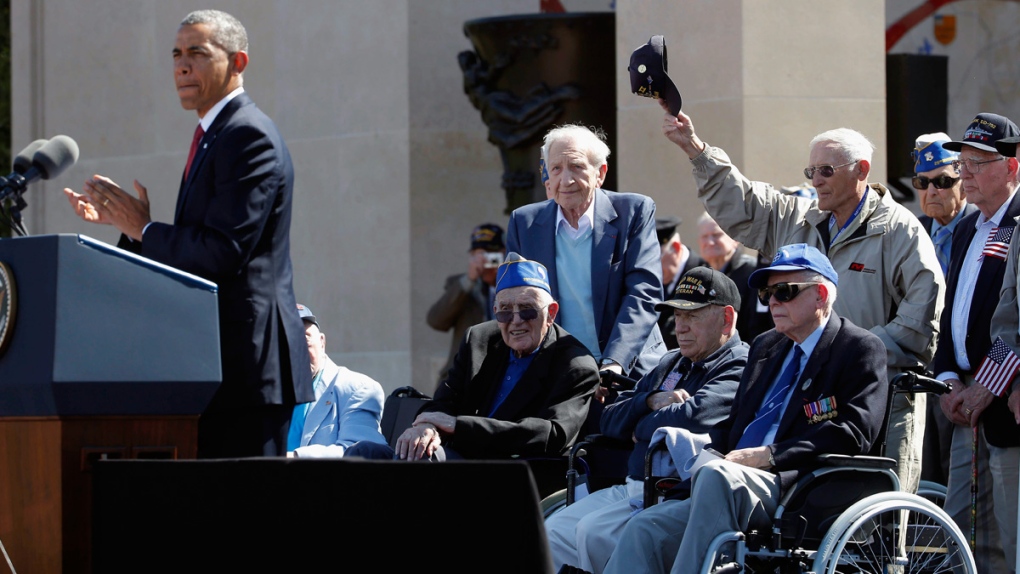 U.S. President Barack Obama, left, acknowledges veterans as he speaks at the Normandy American Cemetery, at Omaha Beach as he participates in the 70th anniversary of D-Day in Colleville sur Mer in Normandy, France, Friday, June 6, 2014. (AP Photo/Charles Dharapak)

COLLEVILLE-SUR-MER, France -- Seventy years after Allied troops stormed the beaches at Normandy, President Barack Obama returned Friday to this hallowed battleground in what he called a "powerful manifestation of America's commitment to human freedom" that lives on in a new generation.

"Our commitment to liberty, our claim to equality, our claim to freedom and to the inherent dignity of every human being -- that claim is written in the blood on these beaches, and it will endure for eternity," Obama said on a morning that dawned glorious and bright over the sacred site he called "democracy's beachhead."

Obama spoke from the Normandy American Cemetery and Memorial, where nearly 10,000 white marble tombstones sit on a bluff overlooking the site of the June 6, 1944, battle's most violent fighting at Omaha Beach. He described D-Day's violent scene in vivid terms, recalling that "by daybreak, blood soaked the water" and "thousands of rounds bit into flesh and sand."

Veterans of that fierce battle travelled long distances to the remote historic site and removed their hats as the audience delivered a long standing ovation when Obama recognized them.

"These men waged war so that we might know peace," Obama said. "They sacrificed so that we might be free. They fought in hopes of a day when we'd no longer need to fight. We are grateful to them."

The anniversary commemoration was a gathering point for world figures in the midst of a current geopolitical crisis, with Russian President Vladimir Putin attending events along with leaders who are standing against his aggressive moves into Ukraine. All eyes promised to be on Putin and Obama, who were expected to have some interaction during a lunch for world leaders at the Chateau de Benouville.

Obama's speech at the morning ceremony came after he met privately with seven of the dwindling number of surviving troops who fought Adolf Hitler's Third Reich, along with seven members of the military who have served since the terrorist attacks of Sept. 11, 2001.

Among them was Sgt. 1st Class Cory Remsburg, an Army Ranger who served 10 deployments and was severely wounded by a roadside bomb in Afghanistan. Obama recognized Remsburg at the emotional high-point of his State of the Union address earlier this year, after first meeting him five years ago at the Normandy commemoration.

Obama held Remsberg up Friday as an example of the sacrifice of his generation, telling the D-Day veterans, "Your legacy is in good hands."

"For in a time when it has never been more tempting to pursue narrow self-interest, to slough off common endeavour, this generation of Americans, a new generation, our men and women of war, have chosen to do their part as well," Obama said. He recognized the commitment that women and immigrants are making in today's more diverse military.

The president mentioned that his grandfather served in Patton's Army and his grandmother was among the many women who went to work supporting the war effort back home, in her case on a B-29 bomber assembly line. Obama's grandparents helped raise him, and he broke from his prepared text to observe wistfully that there was never a time he missed his grandfather more or would have loved to be with him.

"Someday, future generations, whether seventy or seven hundred years hence, will gather at places like this to honour them," Obama said. "And to say that these were generations of men and women who proved once again that the United States of America is and will remain the greatest force for freedom the world has ever known."