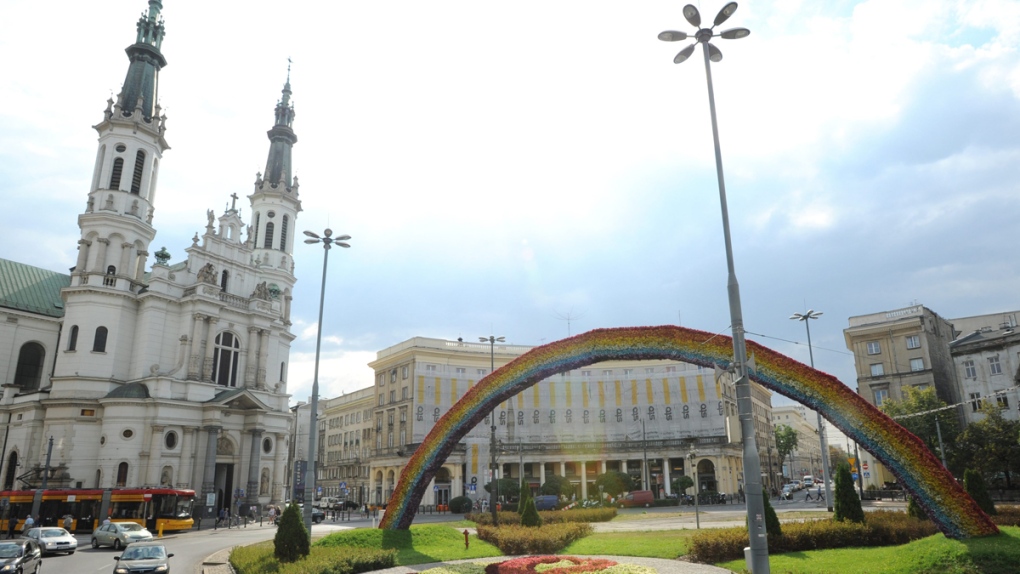 WARSAW, Poland -- Warsaw's iconic and controversial rainbow art, once installed by an old cloister and then a symbol of Poland's leadership in the European Union and of tolerance for sexual minorities, has been taken down.

Dozens of people watched Wednesday night as workers took down the plastic flowers and dismantled the metal support structure in the city's Savior Square. Some took some spare flowers as souvenirs of a piece of art that has provoked heated debates about tolerance in Poland.

Magda Mich, spokeswoman for the Adam Mickiewicz Institute that had the colorful arch planted in the downtown square in 2012, said Thursday that it was a temporary installation and was long planned to be moved to another location, still to be announced. It was moved out at night to avoid disturbing street and tramway traffic, she said.

The six-colour, 9 metres-high rainbow by artist Julita Wojcik started in 2010 as half-arch supporting calls for renovation of an old cloister in Wigry, in Poland's lake district. A full rainbow, it advertised Poland's 2011 EU presidency in Brussels.

It was then moved to the heart of Warsaw's hipster life, where it became a symbol of tolerance, but also became an object of controversy, standing by a Catholic church and was repeatedly set on fire by right-wing groups. It was badly damaged by arson on national Independence Day in 2013, and city authorities had it rebuilt at the cost of over 100,000 zlotys (24,000 euros, $27,000), with anti-fire water sprays installed.

Wojcik told The Associated Press that her objective was to provoke a debate as the rainbow stands for gay rights, but also for co-operation and harmony.

Previously supportive, the city authorities did not extend the contract for its presence in the square.

"There is no better place for the rainbow than the Savior Square," Wojcik said.