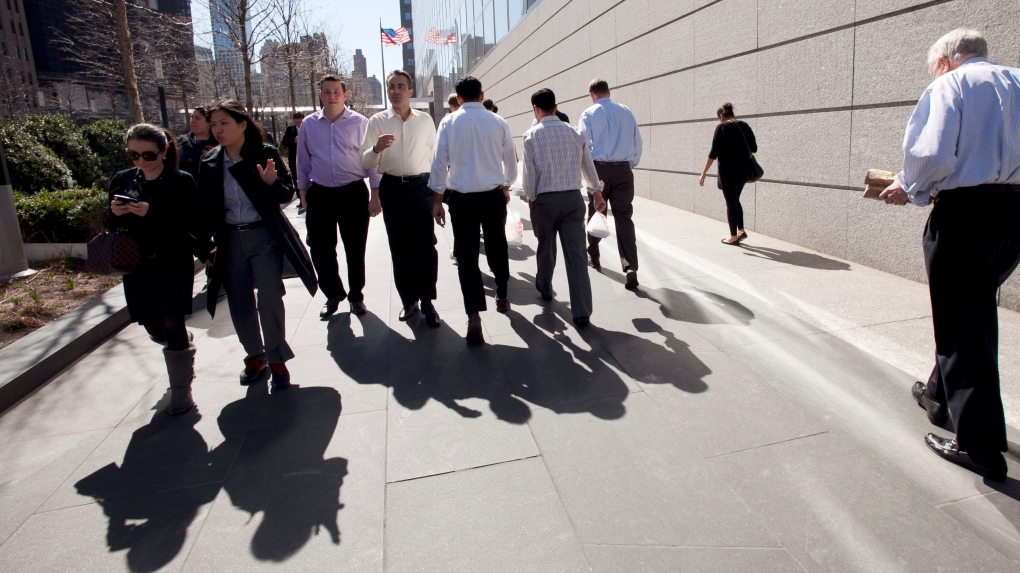 NEW YORK -- Goldman Sachs pinned a poll to its Twitter account asking what its employees should wear to work now that the investment bank has relaxed its dress code.

The winning choice? "Hoodie & sneakers" at 38 per cent. But "suit" came in a solid second place at 28 per cent. Least popular was "midtown uniform," a look so ubiquitous that it has its own Instagram account .

The tongue-in-cheek poll pointed to a question gripping workplaces in an era when business casual -- whatever that means -- has become so accepted that even the most buttoned-up symbol of Wall Street power has surrendered to it. The 150-year-old company sent an internal memo this week announcing the time was right "to move to firmwide flexible dress code" while urging its 36,000 employees to "exercise good judgment in this regard."

"It can be pretty scary because what is acceptable and what is appropriate to wear to work is not an easy question to answer. A suit? That's easy," said Chris Bossola, CEO of the Need Supply Co., a clothing and lifestyle store based in Richmond, Va.

"Goldman was one of the last holdouts of a more formal dress code," Burke said.

Facebook CEO Mark Zuckerberg's famous go-to outfit -- jeans and a grey T-shirt -- projects the confidence of the founder of a company that upended how people interact and companies advertise. It was when he wore a blue suit to a congressional hearing last year that observers said he looked diminished as lawmakers grilled him over Facebook's privacy policies.

The episode was a vivid reminder that jeans won't do in every setting. But Wall Street firms have had to get with the program as they compete with tech giants for young workers comfortable with ditching the suit and tie in most professional settings.

Goldman Sachs first relaxed its dress code for its technology and digital division employees in 2017. Expanding the policy to the rest of its workforce, Goldman cited its "one firm philosophy and the changing nature of workplaces." The change comes three years after the country's largest bank, JPMorgan Chase & Co, adopted its own firmwide flexible dress policy.

The dress code is symbolic of a deeper cultural transformation at financial firms, which are trying to project themselves as innovation hubs where individuality and autonomy is emphasized. Goldman, which says one-quarter of its employees work in engineering-related roles, has in-house incubator to allow employees to develop ideas. J.P. Morgan Chase has plans to open a financial technology campus in California's Bay Area.

The tone has been set from the top. Goldman Sachs CEO David Solomon, who likes to emphasize his side gig as a DJ, has been known to show up tieless at formal events, as have the chief executives of JP Morgan Chase and Citigroup.

Of course, the business casual conversation often centres around men, probably because finance remains male-dominated at the top levels. Men held nearly 80 per cent of senior level and executive positions in U.S. investment banking and securities dealing in 2015, according to research compiled by Catalyst, an organization the promotes women in the workplace.

Women have also long faced a more complicated calculation then men when it comes to workplace attire.

So, what constitutes acceptable professional attire these days?

"This is pretty much what we wear," said Ed Silhan, a chief revenue officer for an advertising tech firm, who was wearing black jeans and boots in downtown Manhattan. "Flip flops, or playground sneakers -- I'd stay away from that. You know, beat-up Nikes that you play basketball with. Just look presentable."

Four years ago, Barclays admonished its staff not to wear jeans, flip-flops or T-shirts at its London headquarters. Goldman Sachs exhorted its employees to keep its "broad and diverse client base around the world" in mind when deciding what to wear, as did J.P. Morgan Chase when it slackened its rules three years ago.

The "midtown uniform" -- slacks, button-downed shirt and fleece vest -- has become something of a refuge for men trying to navigate a more laid-back culture fertile for missteps.

"That's probably a lazy solution," said Bossola of The Need Supply Co. "The worst-case scenario is that next Monday at Goldman Sachs, employees all wear chinos and plaid shirts. The best case is that they make an effort to craft a wardrobe that works for their industry."

What should Goldman Sachs employees wear to work tomorrow? Asking for a friend… https://t.co/zFKNe4hyWf

#TBT to 1980 when phones were rotary, music was metal and jeans were “inappropriate” at $GS. #GS150Years pic.twitter.com/0gcUDXqcyf