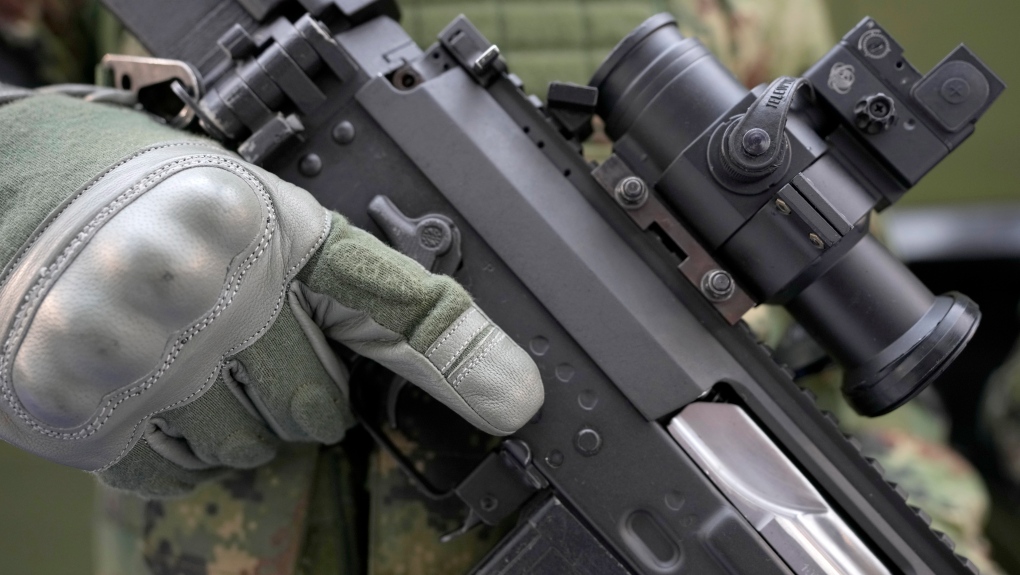 A soldier holds a new M19 rifle made by Serbian armaments company Zastava Arms at an arms fair in Belgrade, on Oct. 12, 2021. (Darko Vojinovic / AP)
STOCKHOLM -

It added that the war in Ukraine had increased demand for weapons this year, but the conflict may also lead to a supply challenge, not least because Russia is a major supplier of raw materials used in arms production.

That could hamper efforts in the United States and Europe to strengthen their armed forces and replenish their stockpiles after sending billions of dollars' worth of ammunition and other equipment to Ukraine, the Stockholm International Peace Research Institute, or SIPRI, said.

"Increasing output takes time" said Diego Lopes da Silva, a senior researcher with SIPRI, adding that if the supply chain disruptions continue, "it may take several years for some of the main arms producers to meet the new demand created by the Ukraine war."

SIPRI noted that some reports indicate that Russian companies are increasing production because of the war but have had difficulty accessing semiconductors and are also being impacted by war-related sanctions. It gave the example of a company that said that it has not been able to receive payments for some of its arms export deliveries.

Arms sales in 2021 reached US$592 billion and was up 1.9% which was higher than the previous period but still below the average for the four years leading up to the COVID-19 pandemic.

In its report published Monday, SIPRI said that "many parts of the arms industry were still affected by pandemic-related disruptions in global supply chains in 2021, which included delays in global shipping and shortages of vital components."

'We might have expected even greater growth in arms sales in 2021 without persistent supply chain issues,' said Dr. Lucie Beraud-Sudreau, head of the SIPRI Military Expenditure and Arms Production Program. She singled out companies, such as Airbus and General Dynamics, which also reported labour shortages.

The institute compiled a list of the world's 100 largest arms-producing and military services companies.

Although U.S. companies dominate arms sales – 40 U.S. companies appeared on that list and totalled $299 billion in 2021 – the North America region was the only one to see a 0.9% drop in arms sales compared with 2020.

For 2021, 27 of the top 100 arms suppliers were headquartered in Europe and the region saw combined arms sales increase by 4.2% compared with 2020, totalling $123 billion. France and Italy recorded a 15% increase in sales among the 100 biggest arms companies, the biggest overall hike.The combined arms sales of the 21 companies in Asia and Oceania that are included reached $136 billion in 2021 – a 5.8% increase.

As for Russia, six companies were included with total sales of $17.8 billion – an 0.4% increase from 2020. SIPRI noted that, ahead of the Russian invasion of Ukraine, there were signs that stagnation was widespread across the Russian arms industry.