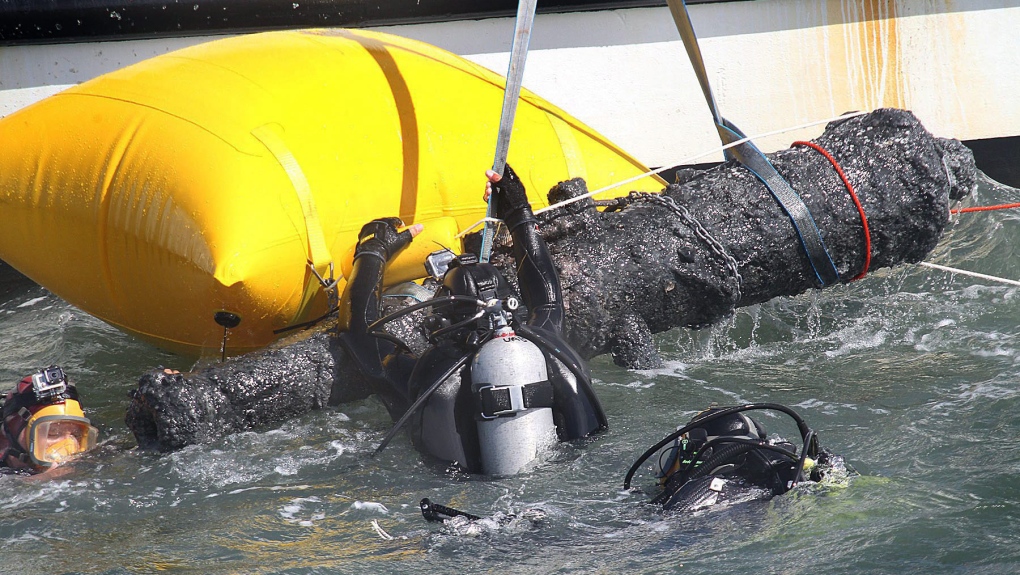 In this Thursday, June 20, 2013 photo, divers emerge with one of two cannons raised from the wreck of the Queen Anne's Revenge off the coast of Carteret County, N.C. (AP Photo/The Jacksonville Daily News, Chuck Beckley)

WASHINGTON -- A dispute involving the pirate Blackbeard's sunken ship is on deck for the Supreme Court's next term.

The justices said Monday they will hear arguments in the fall in a copyright case involving the Queen Anne's Revenge, which was discovered off North Carolina's coast in 1996. The case pits the state of North Carolina against a company that has documented the ship's recovery.

The ship is the property of the state, but under an agreement, North Carolina-based Nautilus Productions has for nearly two decades documented the ship's salvage. In the process, the company and copyrighted photos and videos of the ship.

In 2013, the state and Nautilus resolved one copyright dispute over photos the state posted on the website of the North Carolina Department of Natural and Cultural Resources, which oversees the ship's recovery and preservation.

The sides reached a settlement agreement in which neither side admitted wrongdoing. But Nautilus later sued after the state posted a handful of Nautilus videos on a state YouTube channel and used a photo in a newsletter. In 2015, state lawmakers passed a law that made shipwreck videos and photographs in the state's custody public records. In its lawsuit, Nautilus argued the law should be declared unconstitutional.

A trial court initially allowed Nautilus' lawsuit to go forward. The judge pointed to the federal Copyright Remedy Clarification Act, a 1990 law that allows private parties to sue states for violations of federal copyright law. North Carolina appealed, arguing that the federal law was unconstitutional and it was immune from being sued. An appeals court agreed, and now the Supreme Court will decide whether the lawsuit can proceed.

Nautilus' owner, Rick Allen, said in a statement Monday that he was gratified the court had agreed to hear his case. North Carolina Department of Justice spokeswoman Laura Brewer said in an email that the office looks forward to continuing to defend the state in the case.

The Queen Anne's Revenge was originally a French ship when Blackbeard, the Englishman Edward Teach, captured the vessel in the fall of 1717. He armed the ship with 40 cannons and made it his flagship.