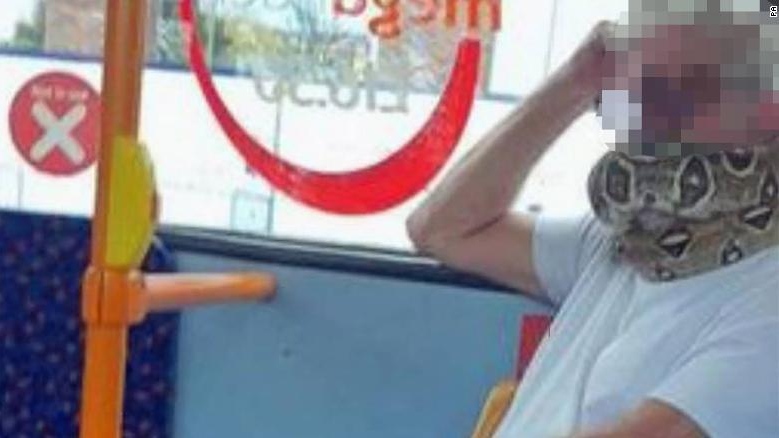 A man (seen here with his identity obscured) was photographed on a bus in the U.K. wearing a snake as 'face mask.' (CNN)

Transportation officials in the U.K. have warned commuters not to use live snakes as face coverings, after a bus passenger was spotted with a large reptile wrapped around his head.

The man raised eyebrows during his bus journey to Manchester, England on Monday when he was seen with the animal draped around his neck and mouth.

A traveler who witnessed the incident told the Manchester Evening News that she initially believed the snake was "a really funky mask" until it started slithering around the handrails.

"It was definitely entertaining," she said.

Wearing a face covering on all public transportation is mandatory in the U.K., except for those who are exempt for reasons of age, health, or disability.

Photos of the incident published online show that the unidentified man was not wearing a mask under the large brown serpent.

A Transport for Greater Manchester spokesperson told CNN that passengers are expected to follow government guidance on wearing face coverings on public transportation during the coronavirus pandemic, unless they are exempt.

"This needn't be a surgical mask ... passengers can make their own or wear something suitable, such as a scarf or bandana," the representative said in a statement.

"While there is a small degree of interpretation that can be applied to this, we do not believe it extends to the use of snakeskin -- especially when still attached to the snake."