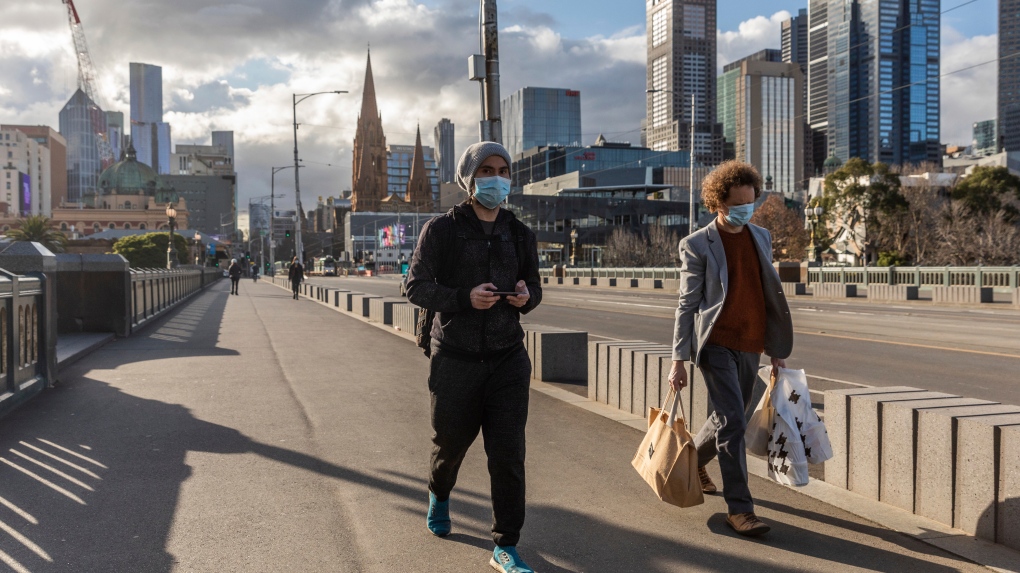 Pedestrians walk away from the central business district as lockdown due to the continuing spread of the coronavirus starts in Melbourne, Wednesday, Aug. 5, 2020. (AP Photo/Asanka Brendon Ratnayake)WLd

TORONTO -- From stay-at-home orders to hefty fines, residents in the Australian city of Melbourne have been living under restrictive COVID-19 lockdown measures that have been described as some of the most draconian in the world.

While the entire state of Victoria has been under lockdown orders since early July, the state capital Melbourne has faced especially tough measures in response to several recent outbreaks.

Since the beginning of August, Melbourne has been in a stage-four lockdown, which means that most businesses have been shut, residents aren’t allowed to leave their homes, except for essential reasons and for one hour of exercise, and an overnight curfew has been in effect.

In early September, the state allowed for the relaxation of a few restrictions; however, the city is still in stage four of its lockdown and the strict stay-at-home orders will be lifted on Oct. 26 if there are fewer than five new cases per day.

From the time the harsh restrictions were announced, Victorian Premier Daniel Andrews has been criticized for the response with his detractors dubbing him “Dictator Dan” in the media while others have blamed him for the country’s worsening economy.

However, Andrews’ tough stance hasn’t been disparaged by everyone. Many support the state lockdowns and some are even expressing their support on social media, using the hashtag #IStandWithAndrews.

In fact, a recent public opinion poll by the market research company Roy Morgan found that 70 per cent of Victorians approved of the way Andrews was handling the pandemic and 63 per cent of respondents agreed the overnight curfew in Melbourne shouldn’t end right away.

So, just how draconian is the pandemic lockdown in Melbourne? CTVNews.ca takes a closer look at the current restrictions in effect in Australia’s second-largest city.

CAN RESIDENTS LEAVE THEIR HOMES?

According to the Victorian government, Melbourne residents must abide by a nightly curfew from 9 p.m. to 5 a.m. The curfew was pushed back one hour – from 8 p.m. to 9 p.m. – in early September.

During the curfew hours, people are only allowed to leave their homes if they’re working or travelling to and from work, or if they’re receiving or giving care to someone else.

Outside the curfew hours, residents can only leave their house for work or study, to get essential supplies, such as groceries or prescriptions, for medical care or caregiving, or for two hours of daily exercise outdoors.

The limit on outdoor exercise was increased by one hour in early September and can be broken into two blocks each day.

HOW FAR CAN THEY TRAVEL?

Since the beginning of August, people living in Melbourne must stay within five kilometres of their home when they are shopping for necessary supplies and exercising. There are exceptions for people who live more than five kilometres away from their nearest supermarket.

Only one person from each household is allowed to go out and do the shopping each day.

Anyone from Melbourne who needs access medical services can travel anywhere in Victoria to do so.

CAN THEY SOCIALIZE WITH OTHERS?

Under the more relaxed restrictions introduced in early September, people who live alone and single parents are now allowed to nominate one person to go visit or have visit them as part of their “single social bubble.”

If the nominated individual lives further than five kilometres away from the single person, they’re still allowed to visit them. However, the nominated person still has to live in metropolitan Melbourne and can’t live in regional Victoria.

If the nominated person lives with other people, those people in the household are not allowed to be home while the single person is visiting.

People with an intimate partner who they don’t live with are allowed to visit each other, even if they live further than five kilometres away from each other. However, if they’re at their partner’s place past 9 p.m., they must stay overnight and return home after 5 a.m.

Melbourne residents who already live with other people are not allowed to have visitors in their home, unless the visitor is a caregiver or if there is an emergency.

Outside the home, two people or a household are permitted to meet outdoors – within five kilometres of their home – for a maximum of two hours for “social interaction, exercise, or recreation.”

WHAT IS OPEN AND CLOSED?

Restaurants and bars are closed with only takeout and delivery options available. Most retailers are also closed to foot traffic and only allowed to provide contactless pick up or delivery.

Most workplaces remain closed with employees only able to go on-site if they’re on the list of permitted industries.

Schools and childcare centres are also still closed with remote learning in effect.

Under the recent easing of restrictions, playgrounds have been allowed to reopen but physical distancing must still be adhered to while children are using the equipment.

DO THEY HAVE TO WEAR FACE COVERINGS?

Melbourne residents are required to wear a face mask whenever they leave their home, unless they have a medical reason not to wear one or if they’re under the age of 12.

Even people meeting up inside their “single social bubble” must wear a face mask the entire time, whether they’re outdoors or indoors.

WHAT IS THE PUNISHMENT FOR BREAKING THE RULES?

People who are caught not wearing a face mask while they’re outside their home can be fined AUD$200 (C$192).

As for the other restrictions, Melbourne police have been authorized to issue on-the-spot fines of up to $1,652 for individuals and up to $9,913 for businesses that break stay-at-home orders.

Those who breach isolation orders for a second or subsequent time after testing positive for COVID-19 can be fined $4,957 on the spot and up to a maximum of $20,000 in the courts for repeat offenders.