Trick-or-treating banned in L.A. this Halloween because of coronavirus risk 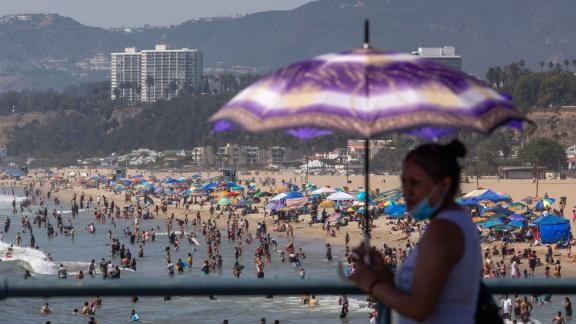 Los Angeles County -- the nation's most populous with more than 10 million residents -- remains in the first tier of the state's four-tiered reopening system. (CNN)

Trick-or-treating won't be allowed in Los Angeles County this Halloween to protect against the spread of COVID-19.

Door-to-door trick-or-treating is banned "because it can be very difficult to maintain proper social distancing on porches and at front doors especially in neighborhoods that are popular with trick or treaters," the Los Angeles County Department of Public Health said in a news release.

The guidance also does not allow "trunk or treating" events from cars and gatherings or parties with non-household members -- even when held outdoors. Carnivals, festivals, live entertainment, and haunted house attractions are also prohibited.

To celebrate the holiday, the county's public health department said residents could organize online parties and car parades, in which participants remain in their vehicles.

Los Angeles County -- the nation's most populous with more than 10 million residents -- remains in the first tier of the state's four-tiered reopening system. As of Tuesday, the county had reported 249,241 positive cases and 6,036 deaths.

Last week, Los Angeles Mayor Eric Garcetti announced a bit of "good news," saying that the number of patients hospitalized with Covid-19 in the city had dropped to its lowest level since early April.

But he warned residents not to confuse the improved hospitalization with the infection rate and reiterated that countywide restrictions would remain in place.

From surge beds to flu vaccines: B.C. shares $1.6B plan for managing COVID-19 this fall, winter

Cats may be contracting COVID-19 at a higher rate than thought before: study

There may be another use for coronavirus-fighting T-cells: Destroying cancer

Here's what back-to-school looks like in Nunavut, Canada's only region with zero COVID-19 cases

Few Canadian blood donors had coronavirus antibodies as of May: study