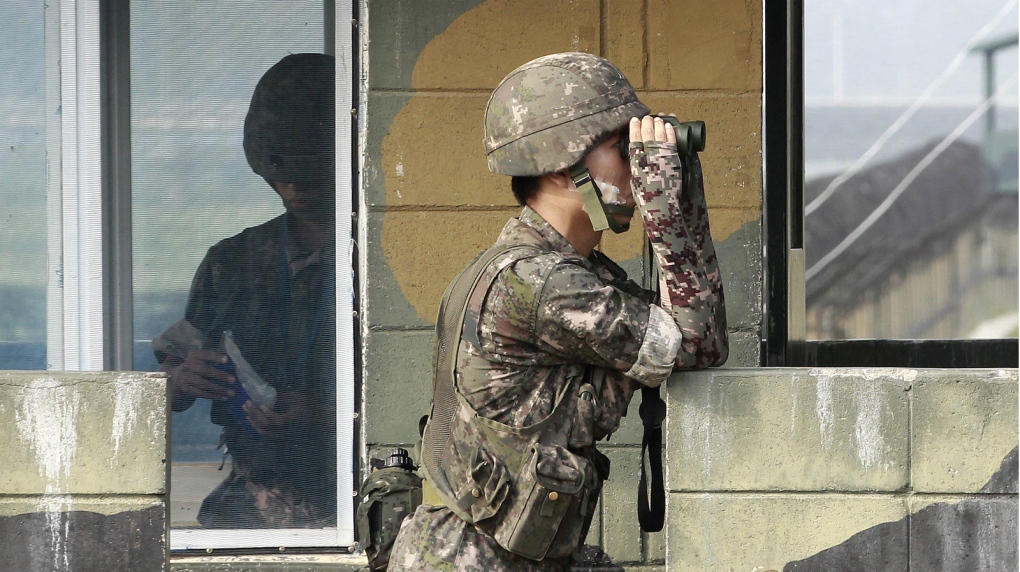 A South Korean army soldier looks through a pair of binoculars at a military check point at the Imjingak Pavilion near the border with North Korea, South Korea, Sunday, July 13, 2014. (AP / Ahn Young-joon)

Shooting rampages by bullied soldiers are not unusual in South Korea, which requires all able-bodied men to serve about two years in the military in the face of threats from North Korea.

The soldier, surnamed Yim, has told investigators that he opened fire on his colleagues in June after seeing drawings they made of him that he considered insulting. Yim had fled into the forest near the border with North Korea but was captured following a failed suicide attempt.

Yim, who has been identified only by his surname, was sentenced to death in a military court in the eastern Gangwon province, a Defence Ministry official in Seoul said on condition of anonymity citing department rules. He said Yim can appeal.

South Korea has not executed anyone since December 1997, although death sentences are still occasionally issued by courts.

In 2005, a soldier tossed a grenade and opened fire at a front-line army unit in a rampage that killed eight colleagues. He said he was enraged at superiors who had verbally abused him. The soldier was later sentenced to death but hasn't been executed.

Both shooting rampages raised questions about the discipline and readiness of South Korea's military, which face North Korean troops across the world's most heavily fortified border. The Korean Peninsula remains in a technical state of war because the 1950-53 Korean War ended with an armistice, not a peace treaty.