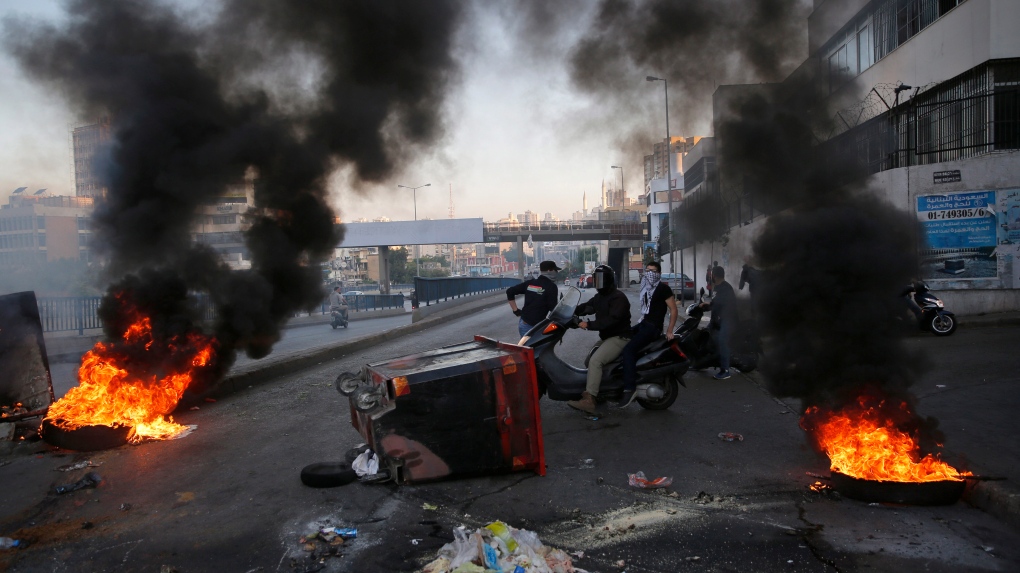 Anti-government protesters ride their scooters as they block a main highway that links to the airport by burned tires and garbage containers, during ongoing protests against the Lebanese government, in Beirut, Lebanon, Monday, Nov. 4, 2019. (AP Photo/Hussein Malla)

BEIRUT -- Protesters closed major roads in Beirut and elsewhere in Lebanon Monday, accusing political leaders of dragging their feet on the formation of a new government amid differences over who should be included.

Prime Minister Saad Hariri resigned last Tuesday, meeting a key demand of the protesters. They have been holding demonstrations since Oct. 17 demanding an end to widespread corruption and mismanagement by the political class that has ruled the country for three decades.

On one of Beirut's main avenues, protesters distributed leaflets apologizing for closing roads and saying that the "roads will remain closed until an independent government is formed."

President Michel Aoun has not yet set a date for consultations with heads of parliamentary blocs to name a new prime minister, the procedure that follows the resignation of a Cabinet.

Many schools, universities and businesses were closed on Monday, and in the southern port city of Sidon some shop owners were forced to close by the protesters.

Aoun discussed the situation with U.N. Special Coordinator for Lebanon Jan Kubis telling him that once a new Cabinet is formed its priority will be "to follow up on fighting corruption by opening investigations in all state institutions."

Lebanon's state-run National News Agency reported that a financial prosecutor has filed a case of overspending against the state's Council for Development and Reconstruction and several other private companies. The case centres on the construction of a dam in northern Lebanon. Such cases against corruption have been rare before the protests.

Also Monday, Hariri met with Foreign Minister Gebran Bassil, the target of some of the protesters' harshest chants, over the formation of a new Cabinet. Cabinets usually take months to be formed in Lebanon -- a small country in which political power is distributed among Christians, Shiites and Sunnis under an agreement that ended the country's 1975-1990 civil war.

The protesters have been demanding that the new Cabinet does not include politicians, but be made of experts who can work on getting Lebanon out of its economic crisis.

"This week is very important. We are closing all the roads for the coming 48 hours and we will be escalating during this week to make sure that we have a cabinet that is of independent and competent people," said activist Gilbert Doumit.

The leaderless anti-government movement has united Lebanese from various religious sects, who are calling for the overthrow of the political system that has dominated the country since the civil war. The following decades of corruption and economic mismanagement have culminating in a severe fiscal crisis.