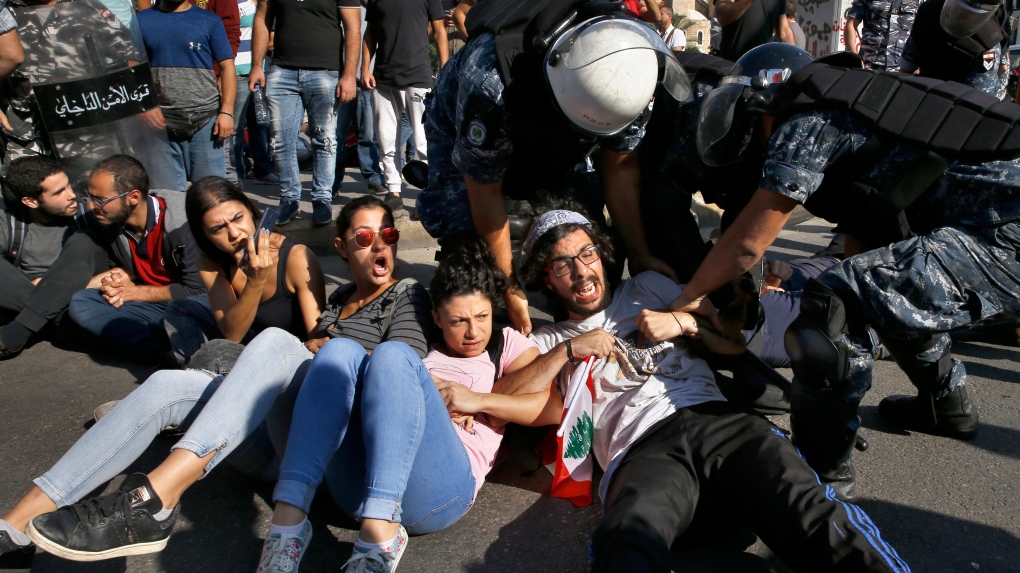 Anti-government protesters lie on a road, as they scream and hold each others while riot police try to remove them and open the road, in Beirut, Lebanon, Thursday, Oct. 31, 2019. (AP Photo/Bilal Hussein)

Banks, schools and many businesses have been shuttered since mass protests erupted Oct. 17. The protests were ignited by a proposed tax on the WhatsApp messenger service but rapidly escalated into calls for the resignation of the government and sweeping political change.

Schools had been set to reopen for the first time in two weeks, but late Wednesday many parents received text messages saying their schools would remain closed for security reasons. The state-run National News Agency reported that schools in some areas would remain closed until further notice.

Banks were set to reopen Friday, amid concerns the severe fiscal crisis that preceded the protests could worsen.

Government offices and businesses meanwhile remained shuttered across northern Lebanon after overnight clashes in which the army used tear gas to disperse protesters, wounding seven of them.

President Michel Aoun, one of the main targets of the protesters' anger, was set to deliver a speech later in the day. Prime Minister Saad Hariri resigned Tuesday, handing the demonstrators their first victory but plunging the country into greater uncertainty. It typically takes weeks or even months to form a government.

"They are trying to divide the street, but the street has one clear demand: We want to breathe clean air and stop the theft," said Rania, a protester in Beirut who declined to give her last name for security reasons.

France called on Lebanon to "quickly" form a new government.

"Everything must be done to avoid provocations and violence and preserve the citizens' right to demonstrate peacefully," Foreign Minister Jean-Yves Le Drian said in a statement. "It is crucial for Lebanon's future that a new government is quickly formed that is able to lead reforms the country needs."

The protesters stood down Wednesday as the army cleared most major thoroughfares, but they packed public squares that night and returned to the streets a day later, insisting their revolution was far from over.

"We are back on the streets to remind (them) that the formation of a new government should not take more than 48 hours," he said.

The protesters have been sitting or lying in the roads, forcing security forces to drag them away by their arms and legs. In some places, security forces have removed piles of burning tires, concrete blocks and other physical roadblocks. There have been scuffles but no reports of serious clashes or injuries.

On Tuesday, hundreds of supporters of the militant Hezbollah group and the allied Shiite Amal party rampaged through the main protest camp, smashing chairs and setting fire to tents. Security forces dispersed them with tear gas and the protesters returned a couple hours later, repairing the tents and resuming their sit-in.

The government is dominated by allies of the Iran-backed Hezbollah, which has accused unnamed foreign powers of exploiting the protests to undermine it.

The protesters have called for the overthrow of the political class that has dominated the country since its 1975-1990 civil war, and which includes several former warlords and their relatives. The sectarian power-sharing arrangement that ended the war gave birth to political machines that have drained the treasury and eroded public services.

Three decades after the end of the war, Lebanon still experiences frequent power outages, the water supply is unreliable and trash often goes uncollected. The country is meanwhile $86 billion in debt, accounting for 150% of its GDP.

Rania, the protester, said the demonstrators are determined to stay in the streets as long as it takes.

"We don't want what happened in 14 days to go to the dust bin," she said. "That is why we are here, to keep the pressure on the government, and we will stay here. We won't leave until you leave."