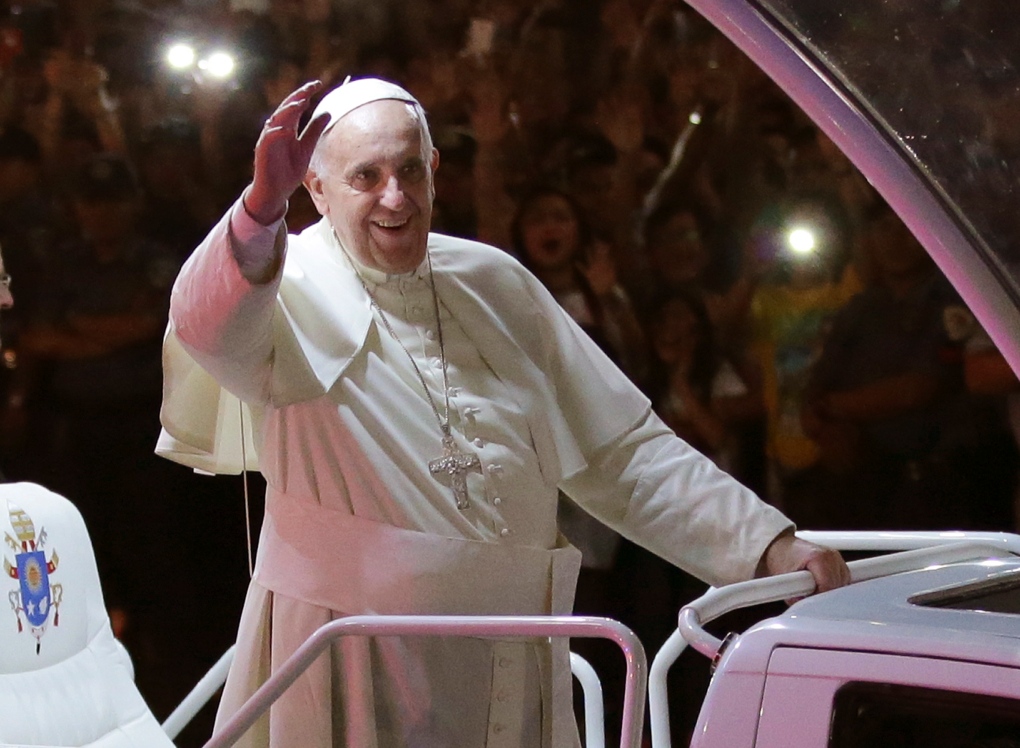 Pope Francis smiles as he waves to Filipinos during his motorcade upon his arrival in Manila, Philippines Thursday, Jan. 15, 2015. (AP / Aaron Favila)

Francis made the comments to reporters en route to the Philippines, where hundreds of thousands of people lined Manila's streets to cheer him as he arrived from Sri Lanka for the second and final leg of his Asian tour. Francis said his visit here would focus on the plight of the poor, the exploited and victims of injustice -- themes sure to resonate in a nation where poverty afflicts nearly a quarter of its 100 million people.

Before touching down though, Francis weighed in on the debate raging in much of the world following the massacre by Islamic extremists against the satirical French magazine Charlie Hebdo, and subsequent attack on a kosher supermarket, that left 17 people and the three gunmen dead.

Francis defended freedom of speech as a fundamental right, and even a duty to speak out for the common good. But he said there were limits to free speech, especially when confronting another equally fundamental human right: the freedom of religion.

By way of example, he referred to Alberto Gasparri, who organizes papal trips and was standing by his side aboard the papal plane.

He by no means said the violent attack on Charlie Hebdo was justified. Quite the opposite, he said such horrific violence in God's name couldn't be justified and was an "aberration." But he said a reaction of some kind was to be expected.

As he emerged from his plane, church bells rang out across the country and hundreds of children danced and waved small Philippine and Vatican flags. A sudden gust of wind blew off his papal cap; Francis grabbed futilely for it and then smiled and descended the stairs from the aircraft to be greeted by President Benigno Aquino III.

The pontiff revealed his priorities as he arrived, saying the "central nut of the message will be the poor, the poor who want to go forward, the poor who suffered from Typhoon Haiyan and are continuing to suffer the consequences."

Powerful Typhoon Haiyan left more than 7,300 dead and missing and levelled entire villages in the central Philippines in 2013, including Leyte province, where the pope will visit Saturday to console survivors.

He said he also had in mind the poor who "face so many injustices -- social, spiritual, existential."

"I think about them," he said, referring to a recent lunch he had with some Filipino workers at the Vatican who had left their families for jobs overseas.

The Philippines is one of the world's largest labour exporters. About a tenth of the population has left the country in search of work, and tales of their abuse and exploitation are common.

President Aquino has waged a campaign against poverty, an issue close to Francis' heart, although the Philippine leader has clashed with the local Roman Catholic Church over a reproductive health law that promotes artificial birth control. Congress, which is dominated by Aquino's allies, passed the legislation in 2012.

Among the pope's welcomers on the tarmac were a boy and a girl from a shelter for street children who handed him flowers. Francis embraced and kissed them.

"I told him bienvenido (welcome)," 9-year-old Lanie Ortillo said, adding the pontiff smiled and replied, "Yes, bienvenido." She added, "While I was hugging him I prayed that he could help more children, not only the two of us."

Francis then boarded his white, open-sided popemobile and his motorcade began rolling along the 11-kilometre (6.8-mile) route to the Apostolic Nunciature in Manila, where he will stay.

Hundreds of thousands of people called his name and snapped pictures from behind concrete barriers topped by iron fencing and guarded by policemen along the entire stretch in a trip beamed live on TV nationwide. Francis constantly shifted from left to right, smiling and waving.

The government has declared national holidays during the pope's visit, which runs through Monday.

Cardinal Luis Antonio Tagle, archbishop of Manila, said he hopes the visit by Francis, the first Latin American head of the 1.2 billion-strong Roman Catholic Church, would be festive and spiritually uplifting and nurture compassion at a time when the country is still recovering from recent deadly disasters, including Haiyan.

"It's like a big, big, big, big national fiesta," a beaming Tagle said in an interview on the eve of the pope's arrival. The visit, he said, "comes at that point when people would really be helped by a moral and spiritual boost coming from someone who really cares."

The pope's trip has given Philippine authorities daunting security challenges, including an outdoor Mass in a historic Manila park on Sunday that officials say could draw a record 6 million people.

About 50,000 policemen and troops have been deployed to secure the pope in a country where relatively small numbers of al-Qaida-inspired militants remain a threat in the south despite more than a decade of U.S.-backed military offensives.

Spanish colonialists introduced Christianity in the 16th century and today just over 80 per cent of the Philippines' 100 million people are Catholics, with other Christians making up about 12 per cent. Muslims account for 5.6 per cent, most of them in the south.