Rescuers close to plane that crashed in Nepal with 22 aboard 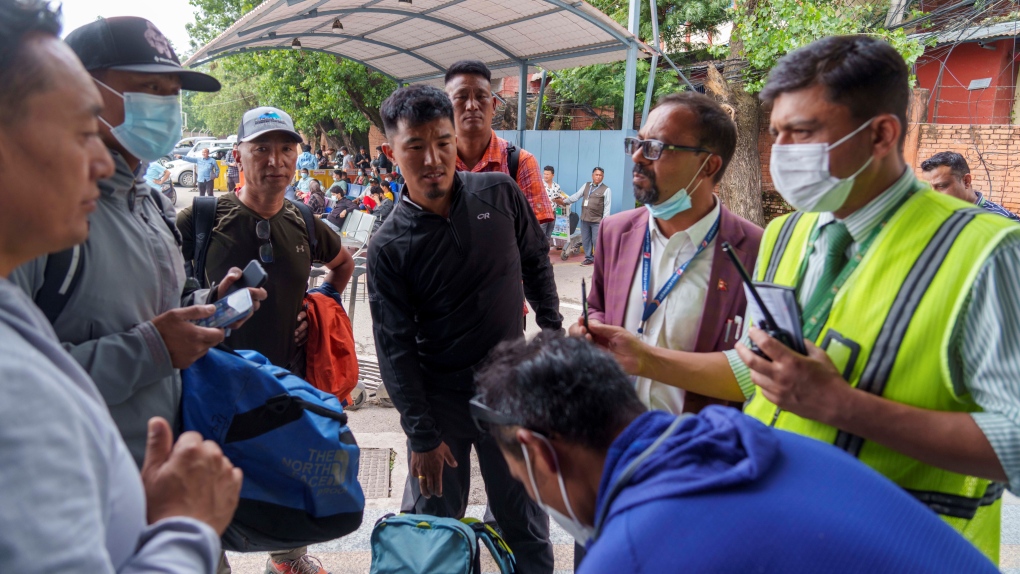 A team of climbers prepare to leave for rescue operations from the Tribhuvan International Airport in Kathmandu, Nepal, May 29, 2022. (AP Photo/Niranjan Shreshta)
KATHMANDU, Nepal -

Rescuers zeroed in on a possible location of a passenger plane with 22 people aboard that is feared to have crashed Sunday in cloudy weather in Nepal's mountains, officials said.

The Tara Air plane was on a 20-minute scheduled flight from the resort town of Pokhara, 200 kilometres west of Kathmandu, to the mountain town of Jomsom. The turboprop Twin Otter aircraft lost contact with the airport tower close to landing in an area of deep river gorges and mountaintops.

An army helicopter and private choppers were taking part in the search, the Civil Aviation Authority of Nepal said in a statement.

Army troops and rescue teams were headed to the possible site of the crash, believed to be around Lete, a village in Mustang district, Narayan Silwal, the army spokesman, said on Twitter.

But bad weather and nightfall caused the search to be suspended until Monday morning, Silwal said.

“Poor visibility due to bad weather is hindering the efforts. The plane has not yet been located,” he said. Rescuers were trying to reach an area where locals allegedly saw a fire, although it is still unclear what was burning, Silwal added. He said that officials can only verify the information once the troops reached the location.

NA has halted all efforts of search and rescue for today due to loss of daylight and adverse weather. The search will be resumed early in the morning tomorrow both from air and ground. Our search and rescue team with HC is on standby at Jomsom.

Sudarshan Bartaula, spokesman for Tara Air, said that rescuers had narrowed down a possible location of the plane.

There were six foreigners on board the plane, including four Indians and two Germans, according to a police official, who spoke on condition of anonymity because he wasn't authorized to talk to the media.

The plane was carrying 19 passengers and three crew, Bartaula said.

It has been raining in the area for the past few days but flights have been operating normally. Planes on that route fly between mountains before landing in a valley.

It is a popular route with foreign hikers who trek on the mountain trails and also with Indian and Nepalese pilgrims who visit the revered Muktinath temple.

Nepal has had a spotty air safety record.

In 2018, a US-Bangla passenger plane from Bangladesh crashed on landing in Kathmandu, killing 49 of the 71 people aboard.

The Twin Otter, a rugged plane originally built by Canadian aircraft manufacturer De Havilland, has been in service in Nepal for about 50 years, during which it has been involved in about 21 accidents, according to aviationnepal.com.

The plane, with its top-mounted wing and fixed landing gear, is prized for its durability and its ability to take off and land on short runways.

Production of the planes originally ended in the 1980s. Another Canadian company, Viking Air, brought the model back into production in 2010.

This version has corrected the location to west of the capital, not east.