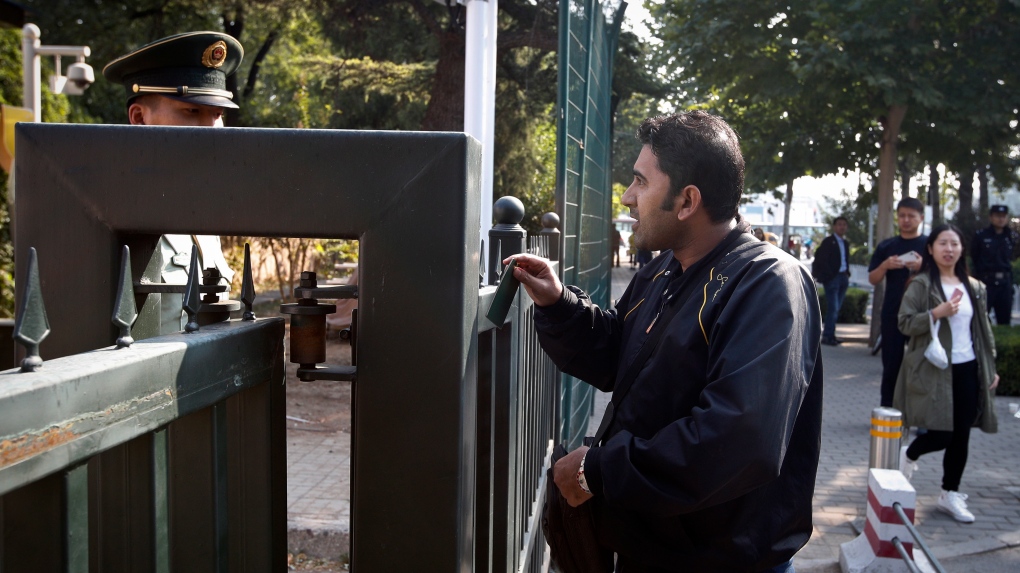 Pakistani businessman Mirza Imran Baig, center, is watched by policemen as he prepares to enter the Pakistan's embassy in Beijing, Wednesday, Sept. 26, 2018. Two Pakistani men are lobbying the Pakistani Embassy in Beijing for help reuniting with their wives, who they say are ethnic Uighurs unable to leave China. (AP Photo/Andy Wong)

BEIJING -- Two Pakistani men went to their embassy in Beijing on Wednesday to lobby for help in reuniting with their wives, who they say are ethnic Uighurs blocked from leaving China, in an example of how a sweeping crackdown has spilled across China's borders.

The internment camps, which have alarmed a United Nations panel and the U.S. government, are estimated to hold around 1 million Uighurs and other Muslim minorities. China denies their existence and maintains that current security measures are necessary to combat religious extremism in a region that has previously experienced ethnic unrest.

Xinjiang's security drive has swept up and separated families and also created friction with neighbouring Kazakhstan over the internment of ethnic Kazakh Chinese nationals and even Kazakh citizens.

There are at least 38 Pakistani men whose mostly Uighur Chinese wives are detained or unable to leave Xinjiang, according to Mian Shahid Ilyas, a Lahore-based businessman. Ilyas has been tracking such cases since his own wife was detained in April last year.

China's foreign ministry said Tuesday that it was not aware of the situation involving the Pakistani husbands, and reiterated its stance that China's policies are aimed at creating "stability and lasting peace" in Xinjiang.

Baig said his wife has since been released from the internment camp but is confined to her hometown in a southwestern part of the region. He said her passport and that of their 4-year-old daughter, also a Chinese citizen, were confiscated.

He has visited the Pakistani Embassy in Beijing and met with the ambassador, Masood Khalid, several times. Still, he said he believes Pakistan is "not interested" in helping him.

Baig and Muhammed Asif, another Pakistani man whose wife and child are stuck in Xinjiang, met with Khalid on Wednesday afternoon to ask for help in getting China to allow their wives to leave the country. Khalid told them to return to the embassy on Thursday for an update, Baig said.