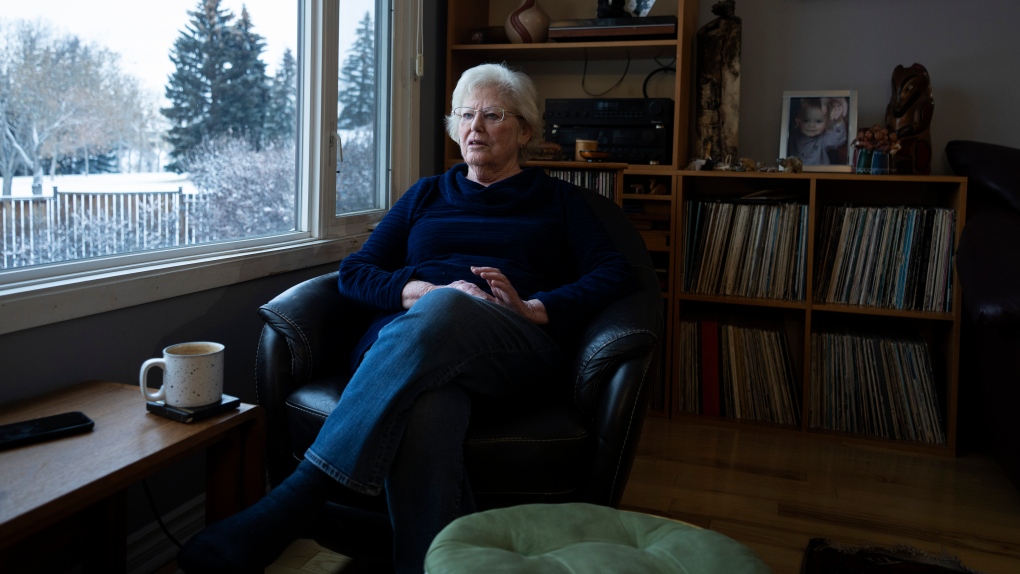 University of Calgary history professor Betsy Jameson worries about history repeating itself for abortion rights in America, at her home in Calgary on Wednesday, Nov 30, 2022. THE CANADIAN PRESS/Todd Korol

Betsy Jameson found a yellow piece of paper in 2017 when she cleaned out her office after retiring from the history department at the University of Calgary.

The paper, faded and slightly stained, had the names and phone numbers of three doctors in New York and New Jersey. It was from the summer of 1967 when she was a 20-year-old student training to be a hall adviser at a college residence in Ohio. The names were doctors who would perform abortions at a time when it was illegal in most states.

"I thought it was an interesting piece of personal antiquity, until last night," Jameson, 75, wrote on Facebook in May.

Her post, which she said was her first on a controversial topic, came the day after the bombshell leak of a draft opinion suggesting the U.S. Supreme Court was poised to overturn the landmark Roe v. Wade case that legalized abortion countrywide in 1973.

"I found myself absolutely furious," she said in a recent interview. "I kept trying to calm down. I'm not given to walking around infuriated.

"So, I finally decided I had to do something."

As a women's historian, she believes the reason for studying history is "to understand where we came from and to inform how we behave in the present."

"I was 25 when Roe v. Wade made abortion legal," she wrote. "It has been legal for two-thirds of my life, but I remember when it wasn't — the lies one told to get one, the expense and distance and danger."

Following the post, Jameson received a call about an abortion rights rally in Calgary where she took the same message to the 200 or so people who gathered on May 15. There were also some anti-choice activists, she said, but they rallied on.

"I'm a mother and a grandmother," she told the crowd. "I love my grandsons and my son more than anything. I'm grateful. I chose to have my child. Most women have not had that choice."

Jameson, who's a dual citizen and has lived in Canada since the late 1990s, worries about how the changes in the U.S. could affect Canada.

The right to an abortion does not exist in Canada in the same way it was enshrined in Roe v. Wade, which has served as a legal example for reproductive rights advocates around the world since 1973.

Abortion is decriminalized in Canada because of a 1988 Supreme Court decision, but no bill has ever been passed to enshrine access into law. The right to an abortion is also not considered a constitutionally protected right under Canada’s Charter of Rights and Freedoms.

In June, the final U.S. Supreme Court decision to overturn the law that provided the constitutional right to abortion for almost 50 years led to more rallies across Canada. Women and their allies took to the streets to denounce it and carried signs reading "My body, my choice" and "Back to the future."

Many who spoke at the time felt angry and weary over the ongoing fight to have their bodies and decisions respected.

Jameson said it is discouraging to fight the same political battles that she fought when she was living in the U.S.

"I think I and other people in my generation made a mistake, which was: We thought that when we won legal victories that we'd won. I underestimated how long it would take to bring about profound cultural change that went with the legal victories."

Justice Samuel Alito's opinion, she said, basically determined that there's no right to abortion because it was not supported by history or tradition.

"He and I have different opinions of history and tradition," said Jameson, suggesting his is a narrow, legal definition.

"In many states for a very long time, abortion was not criminal, but because there wasn't a law on the books that said you can do it, he counts it as not a right. My definition is what women did and how the state behaved in the face of local sentiment."

By that measure, she said there's a long history and a long tradition of abortion in the U.S.

"I would simply tell the justice that if we define history and tradition by what Americans have done, then abortion is more American than football.

This report by The Canadian Press was first published Dec. 3, 2022.