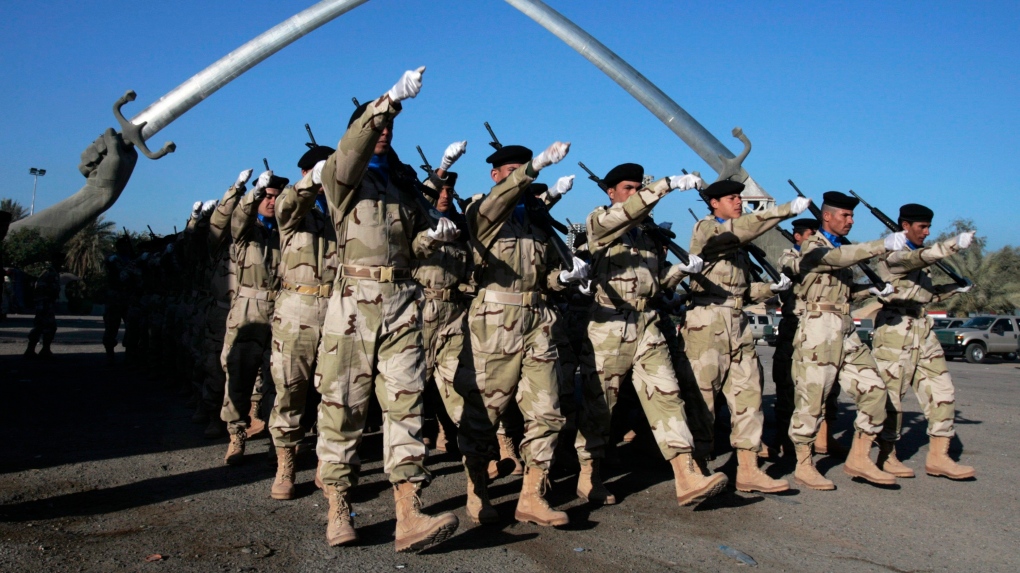 Iraqi soldiers practice ahead of the Army Day parade at the Victory Arch, in Baghdad's Green Zone, Iraq, Jan. 3, 2009. THE CANADIAN PRESS/AP-Karim Kadim

OTTAWA -- Iraq's male-dominated military may slowly be getting used to dealing with high-level female counterparts, suggests the recently departed male commander of Canadian Armed Forces trainers in that country.

Maj.-Gen. Dany Fortin said that bodes well for his successor, Maj.-Gen. Jennie Carignan, who assumed command last week of the NATO training mission in Iraq, a country whose military and political power is held squarely in the fist of men.

Carignan is a decorated combat veteran who served Canada in Afghanistan during some of the fiercest fighting between Western forces and a resurgent Taliban and al-Qaida. She replaces Fortin, who served for 13 months.

"We continue to have women in that mission in different key positions -- advisers and trainers," Fortin said Tuesday.

"What I've observed in the last year is there were female members in the mission that were welcome, open arms, with their viewpoint considered by senior (Iraqi) leaders. It was actually surprising because I thought it would be a little bit harder than that."

Carignan takes over a training mission aimed at professionalizing Iraq's military at a time of massive internal unrest and the ever-present threat of retreating but still-plotting Islamic State militants.

Fortin said Carignan's Afghanistan experience will serve her well, and her presence will send a message to her Iraqi interlocutors about the core tenets of respect for the rule of law, gender equality and respecting subordinates that form part of the foundation of what NATO teachers are trying to impart.

"Knowing how smart and competent she is, she will find a way and ensure she gets her point across in a very meaningful way," said Fortin.

"Some of the lessons we teach without teaching -- by demonstrating, by doing it."

The Defence Department made Fortin available for media interviews because he had just returned from Iraq. Carignan, who just assumed her new role, was not made available.

Earlier this summer, Carignan was asked about her upcoming command in Iraq on the sidelines of a visit to Canada by the secretary general of NATO. She said her presence would serve as an example to Iraqi women.

"I think it will demonstrate that this is a possibility for everybody. That somebody who wants to get involved into military, or into operations or into security fields, that it's possible for everybody to do this," she said.

"Women are 50 per cent of the population and it is just normal that they be involved in the decisions that their country is making."

Fortin said he overlapped with Carignan for about a week to ensure a smooth transition, and to build on the gains made by the training mission, which include training Iraqis to become teachers as well.

Anti-government protests have rocked Iraq since October, resulting in the deaths of almost 400 people, and led to the resignation of Adel Abdul-Mahdi as prime minister last week.

Fortin said he had to make adjustments to his training mission because of the unrest, but most of the NATO training plan is unfolding as planned.

The NATO trainers deal primarily with the Iraqi defence department while interior ministry forces and the police are charged with quelling the unrest, which was sparked by complaints about government corruption and the undue influence of Iran in Iraq.

But the Iraqi military is still busy trying to root out the remaining vestiges of Islamic State militants, also known as Daesh. Daesh no longer holds territory, but is still a threat, said Fortin.

He said Iraqi forces are pursuing Daesh into harder-to-reach areas "to ensure there is no ungoverned space where they can thrive and pose threats to the people of Iraq," noting the group still commands thousands of fighters.

"It's still very much out there."

Canada is contributing about 850 military personnel to the international coalition to defeat the Islamic State, including the hundreds of military trainers in Iraq, as well as a smaller number in Lebanon and Jordan. Canada has also deployed dozens of special forces to Iraq, as well as four helicopters and a combat hospital.