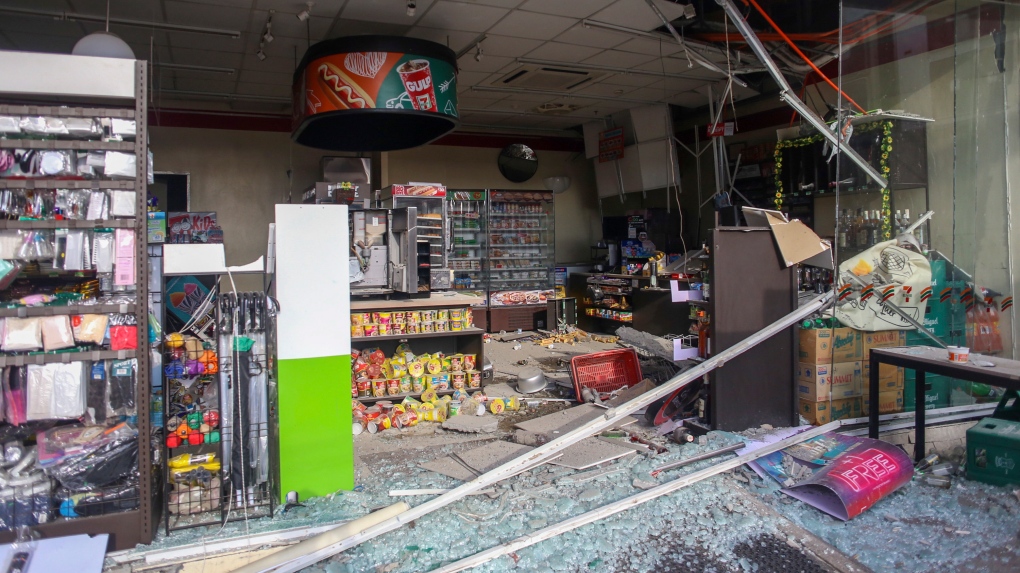 Debris are scattered on the floor of a damaged store a day after a strong quake struck in Digos, Davao del Sur province, southern Philippines Thursday, Oct. 17, 2019. (AP Photo)

The Office of Civil Defence said two people died and 18 were injured in a landslide set off by Wednesday night's quake in Davao del Sur province's Magsaysay town, where a child also was killed after a wall collapsed on her.

Officials reported two more deaths elsewhere, including a girl hit by a collapsed wall in southern Maguindanao province. More than 50 people were injured in total, mostly after being hit by concrete walls and falling objects.

The Philippine Institute of Volcanology and Seismology said the 6.3 magnitude was centred 22 kilometres (14 miles) southeast of Tulunan in North Cotabato province at a relatively shallow depth of 8 kilometres (5 miles). More than 200 aftershocks have been recorded.

The U.S. Geological Survey placed the magnitude at 6.4 quake with a depth of 14 kilometres (9 miles). Shallow quakes tend to cause more damage than deeper ones.

Some areas lost power, including the transport hub of Kidapawan city. A fire broke out in the Gaisano shopping mall in General Santos city shortly after the quake, but there were no reports of people trapped.

Vice Mayor Joselito Pinol of North Cotabato's M'lang town said patients were evacuated out of a hospital to ensure their safety during the quake. Several buildings were damaged, including Pinol's office, where the glass-windowed facade fell.

Schools in quake-hit areas, including the president's hometown of Davao city, suspended classes on Thursday so buildings can be inspected for damage. President Rodrigo Duterte was in the capital, Manila, when the quake struck.