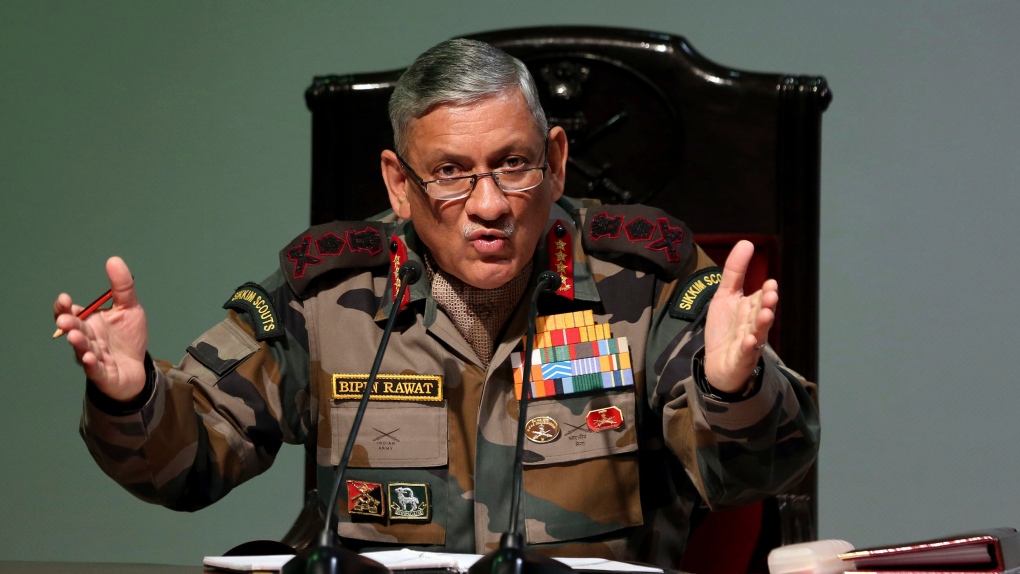 It said in a tweet that the helicopter "met with a tragic accident."

The dead included Rawat's wife. The air force said one officer, Group Capt. Varun Singh, survived and is being treated in a military hospital.

The air force said the Russian-made Mi-17V5 helicopter was on its way from an air force base to the army defence services college when it crashed near the town of Coonoor, a hill station in Tamil Nadu. The reason for the crash was not immediately known.

Television images from the crash site showed plumes of smoke billowing from the debris as local residents tried to put out the fire and remove bodies from the wreckage.

Archrival Pakistan's army chief, Gen. Qamar Javed Bajwa, expressed his condolences on the "tragic death" of Rawat and his wife, its government said in a tweet.

The air force said an inquiry has been ordered into the accident.

Rawat, 63, was the most senior official in the Indian military and the first chief of defence staff, a position created by the government in 2019. He was also an adviser to the Defence Ministry.

His primary task was to overhaul the military, which has struggled to modernize and improve coordination among the army, navy and air force.

He previously served as chief of army staff and also commanded forces in Indian-controlled Kashmir and along the frontier with China.

In 2015, Rawat oversaw Indian "surgical strikes" into neighbouring Myanmar, when para-commandos entered the country to attack Naga rebels who had ambushed and killed Indian troops.

In 2017, he awarded a gallantry medal to an army officer who had tied a civilian to the front of his jeep in Kashmir, where rebels are fighting Indian rule. The incident sparked controversy within India and outside, with rights groups saying the officer used the man as a human shield against stone-throwing protesters. Rawat said the officer's actions were within the rules because the army was facing a "dirty war" in the disputed region and had to fight using "innovative" ways.

Last month, he triggered another controversy by saying on television that Kashmir residents are offering to "lynch terrorists themselves" and that it was a "very positive sign." Lynchings are illegal under Indian law. He did not provide any evidence to support his statement.

Kashmir is divided between India and Pakistan, and both claim the entire Himalayan territory. Most Muslim Kashmiris support the rebels' goal of a united Kashmir, either independent or under Pakistan rule.

Rawat earlier survived a helicopter crash in 2015 in the northeast state of Nagaland.

The type of military transport helicopter that crashed Wednesday, Mi-17V5, is widely used in India by the army and ministers when visiting defence locations.

With deep regret, it has now been ascertained that Gen Bipin Rawat, Mrs Madhulika Rawat and 11 other persons on board have died in the unfortunate accident.