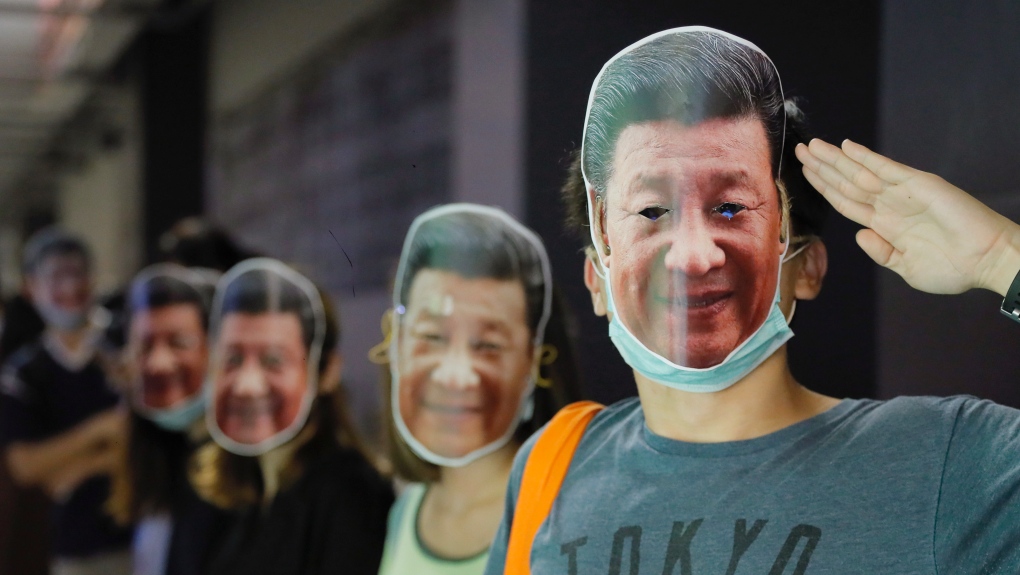 Gathering along the city's subway lines Friday night, many protest supporters masqueraded as Winnie the Pooh or Guy Fawkes. They help up their phone lights and chanted slogans calling for a "revolution of our times" -- a battle cry of the 5-month-long movement that has shaken the semi-autonomous Chinese city with violent confrontations between protesters and police.

Chinese internet users have joked that Chinese President Xi Jinping resembles the talking bear, leading the country's censors to scrub online references to the character. Fawkes masks have come to represent anti-government protests around the world.

The protesters were taking a lighthearted approach to oppose the government's decision this month to invoke colonial-era emergency regulations banning face masks at rallies as it struggles to contain the chaotic protests.

The peaceful event comes ahead of a mass rally that organizers are planning Sunday to press their demands. Police refused to authorize the march, citing risks to public safety and order, but protesters have previously ignored such rejections.

Hong Kong's leader Carrie Lam has said the ban on masks, which have become a hallmark of the protests, is aimed at deterring radical behaviour. Offenders can be punished by up to a year in prison.

But the protesters say they wear them out of fear of retribution and concern that their identities will be shared with China's massive state security apparatus.

This month, two police shootings that injured teenage protesters, the stabbing of a police officer, and the detonation of a small, remote-controlled bomb close to police officers ratcheted up violence to levels unprecedented since the former British colony reverted to Chinese rule in 1997.

Some protesters out Friday assumed the identity of Xi or Hong Kong's deeply unpopular Beijing-backed leader. Others wore masks depicting Pepe the Frog, a character that has become a symbol for the Hong Kong protesters unaware of its association with far-right extremists in the U.S.

At least one protester parodied NBA basketball star LeBron James. He has been criticized for caving to China's communist leaders after he suggested free speech can have consequences, following a now-deleted tweet by Houston Rockets general manager Daryl Morey in support of the protests that angered Beijing.

The protesters' aim was to form human chains extending 40 kilometres (25 miles) across Hong Kong by tracing the city's subway system, mimicking a similar event in August. It's unclear if they achieved that. There were gaps in a part of the chain in one downtown location.

Also Friday, Hong Kong airline Cathay Pacific said passenger traffic to mainland China last month plummeted 23.2 % from a year ago, in the latest sign of the protests' impact on the city's tourism industry. The decline contributed to a 7.1 % drop in overall passenger numbers.