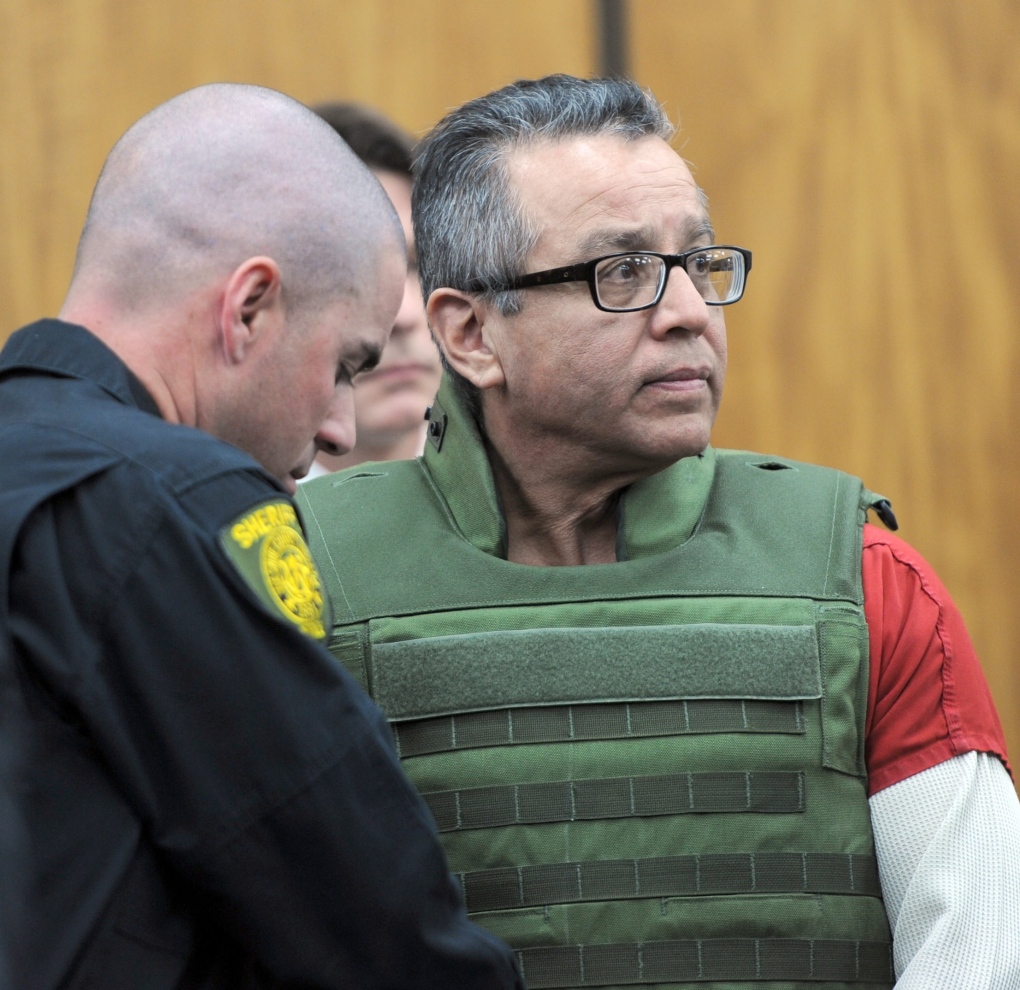 RENO, Nev. -- The gunman convicted of assassinating a Hells Angel leader in a 2011 shootout between rival motorcycle gangs at a Nevada casino was sentenced Thursday to life in prison with no possibility for parole until he's at least 83 years old.

Ernesto Gonzalez, ex-president of the Vagos chapter in Nicaragua, was convicted in August of killing Jeffrey "Jethro" Pettigrew, 51, who was known as the "godfather" of the Hells Angels in San Jose, Calif.

Pettigrew's mother called Gonzalez a "coward" for shooting her son in the back before Washoe District Judge Connie Steinheimer sentenced the 55-year-old San Francisco man to life with the possibility of parole after 20 years on five felony counts including first-degree murder.

But the judge added a gang enhancement to the penalty, so if Gonzalez is paroled, he'll have to serve a minimum of eight years more before he could be freed, "which in your case may not be particularly realistic," she told him.

Gonzalez claimed he was acting in self-defence and defence of others after a brawl broke out that turned a crowded Sparks casino floor into a shooting gallery in September 2011. He said he fired his gun because Pettigrew and another Hells Angel were kicking a fellow Vagos so hard in the head he thought they would kill him.

"They left me no choice but to act as I did in defence of my brother," he told the judge before sentencing Thursday. He said he wanted to offer his condolences to Pettigrew's family.

Gonzalez's lawyer, David Houston, said he would appeal to the Nevada Supreme Court after Steinheimer denied a motion Thursday for a new trial based on faulty instructions given to the jury, which deliberated only five hours before returning the guilty verdicts.

"This case is far from over," Houston told The Associated Press after the sentencing.

Prosecutors said the killing was part of an orchestrated hit on Pettigrew, stemming from a long-running feud between the rival gangs in California.

"There was a concerted attack that resulted in Mr. Gonzalez sneaking up behind Mr. Pettigrew and shooting him in the back," Washoe County special prosecutor Karl Hall said Thursday.

Jeri Pettigrew, the victim's mother, told Gonzalez from the witness stand she wished she could say that she forgives him "but I think that is going to take a little more time."

"I'm sorry, but I consider you a coward shooting my son in the back, not once, but four or five times," she said. "You killed someone who had a big, big heart, (who) believed in paying it forward with everyone. He had a million friends. He had no enemies."

Houston said the appeal would focus in part on the judge's failure to provide the jury with proper instructions in a case that was especially confusing because prosecutors charged Gonzalez with three separate murder-related counts -- conspiracy to commit first-degree murder, second-degree murder and conspiracy to engage in a fight resulting in death. He was found guilty of all three.

Houston said other Vagos members may have independently planned Pettigrew's death but Gonzalez was not aware of that. He said the jurors' confusion was evident when they sent out a note to the judge about four hours into their deliberations that asked, "If a person has no knowledge of the conspiracy but their actions contribute to someone else's plan, are they guilty of conspiracy?"

Houston said that prosecutors agreed with him during a teleconference with the judge about the question that the correct answer was 'no' because "knowledge is an element of a conspiracy."

Steinheimer said Thursday she replied to the jury at the time that it would be improper for the court to provide additional instructions as to how to interpret her previous instructions, in which she said she thought she had made it clear they could not find him guilty of conspiracy to commit murder if he didn't have knowledge of the conspiracy.

But Houston said the fact the question was raised in the first place showed at least one juror was confused and needed further guidance. He said that confusion became further apparent when the jury returned its verdicts just 38 minutes later.

But Hall said the judge was correct in her instructions to the jury because it was up to the jury -- not the judge -- to determine whether Gonzalez had knowledge of the conspiracy.

"A verdict in 38 minutes would indicate there was not a lot of confusion," he said.