From Australia to Wisconsin, Westerners join Kurds to battle ISIS 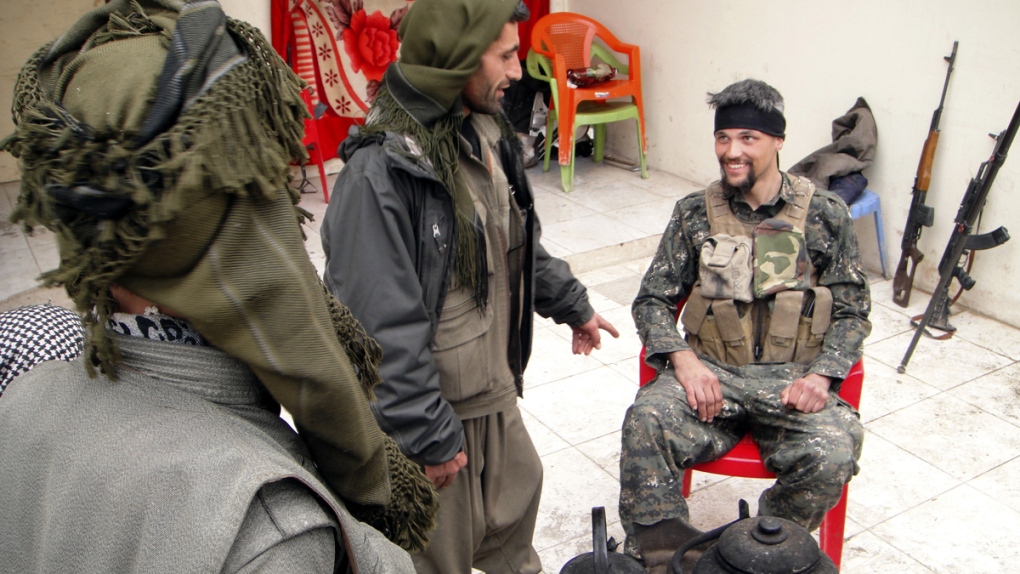 SINJAR, Iraq -- As Kurdish fighters gathered around a fire in this damp, frigid mountain town in northwestern Iraq, exhausted from battling the Islamic State group, a surprising recruit wearing a tactical vest with the words "Christ is Lord" scribbled on it joined them.

The fighter, with a sniper rifle slung over his shoulder and a Rambo-styled bandanna around his head, is 28-year-old Jordan Matson from Sturtevant, Wisconsin, a former U.S. Army soldier who joined the Kurds to fight the extremist group now holding a third of Iraq and neighbouring Syria.

"I'm not going back until the fight is finished and ISIS is crippled," Matson told The Associated Press, using an alternate acronym for the militant group. "I decided that if my government wasn't going to do anything to help this country, especially Kurdish people who stood by us for 10 years and helped us out while we were in this country, then I was going to do something."

Matson and dozens of other Westerners now fight with the Kurds, spurred on by Kurdish social media campaigners and a sense of duty rooted in the 2003-2011 U.S.-led military intervention in Iraq. And while the U.S. and its coalition allies bomb the extremists from the air, Kurds say they hope more Westerners will join them on the ground to fight.

Foreigners joining other people's wars is nothing new, from the French Foreign Legion to the International Brigades of the Spanish Civil War. The Kurds, however, have turned to the Internet to find warriors, creating a Facebook page called "The Lions of Rojava" with the stated aim being to send "terrorists to hell and save humanity." The page also frequently features portraits of smiling, beautiful and heavily armed Kurdish female commanders and fighters.

Matson, three other Americans and an Australian national who spoke to the AP all said they arranged to join Kurdish forces through the Facebook page, run by the People's Protection Units, or YPG, the main Syrian Kurdish militia fighting in northern Syria and Iraq.

They crossed from Turkey into Syria, now in its fourth year of civil war, before later joining a Kurdish offensive sweeping into Iraq last month. They now are based in Sinjar, where stone homes painted green, pink and yellow have been damaged in fighting and are surrounded by sandbags and piles of rubble. Thousands of Yazidi residents fled into the surrounding mountains last year during the Islamic State offensive.

Foreigners like Matson say they are drawn to helping Kurds, Yazidis and other minority ethnic groups caught up in the battle, facing possible destruction at the hand of extremists.

"How many people were sold into slavery or killed just for being part of a different ethnic group or religion?" Matson said. "That's something I am willing to die to defend."

The other Westerners who talked to the AP spoke on condition of anonymity, fearing the reaction of their families, who didn't know where they were, or possible legal troubles if they make it back home.

So far, the U.S. hasn't banned Americans from fighting with militias against the Islamic State group, though it considers the Turkey-based Kurdish Workers' Party, commonly known as the PKK, a terrorist organization. The PKK has been fighting alongside the YPG in Sinjar and in the Syrian town of Kobani.

Australians are forbidden by law from fighting with any force outside of the Australian national army. Australia was also one of the first countries to criminalize travel to Syria's al-Raqqa province, where the Islamic State group has established the de facto capital of its self-styled caliphate.

The U.S. Embassy in Baghdad had no immediate response to an AP query about Americans fighting with the Kurds.

It's unclear how many foreigners total are fighting with the YPG and other Kurdish forces, though both foreigners and Kurds say there are "dozens."

There's a clear camaraderie among the foreign fighters in Sinjar, who mostly travel in pairs.

A number of YPG fighters, many of them as young as 17, joke and tease their new foreign friends, speaking to them in the local Kurdish dialect.

One fighter, 21-year-old Khalil Oysal from Syria, spends much of his time with the foreigners since he can speak English.

"We learn from them and they learn from us," said Oysal, who American and Australian fighters have nicknamed Bucky. "They speak with us and they like to joke. They share with us many things."

Western fighters in Sinjar say there is a major drive to recruit as many foreigners as possible, especially those with military training, as many of young Kurdish fighters have little or no experience. The young fighters often pick up weapons and ammunition from dead Islamic State militants. They also have no body armour.

"You need to know what you're getting into," Matson said. "A lot of times you're going out, you're in a mud hut. ... You have bullets and a blanket, and sometimes you just have bread, but you need to hold the line."