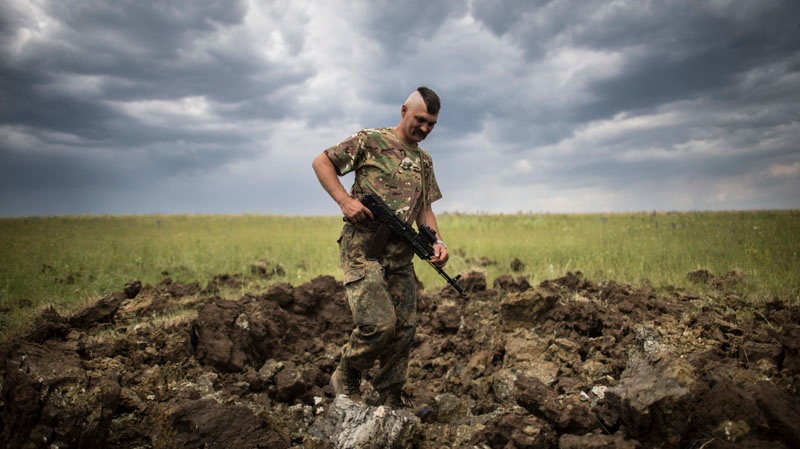 A Ukrainian serviceman investigates a crater left by a Grad rocket in the village of Toshkivka, Luhansk region, eastern Ukraine on Monday, June 15, 2015. (Evgeniy Maloletka/AP)

PARIS -- The foreign ministers of Russia, Ukraine, France and Germany tried Tuesday to revive high-end diplomatic efforts to end the conflict in eastern Ukraine, amid escalating fighting that is throwing doubts on a shaky peace accord.

Russian Foreign Minister Sergey Lavrov said afterward that the four agreed to "not allow a breakdown" of a peace deal reached in February.

"There is a sense that there are powers who would like to destroy this process," Lavrov told reporters in Paris. "I won't name them. But such forces exist. Many for different reasons prefer military, security scenarios, many do not want the situation to calm down, but to the contrary they want it to worsen. Today all four ministers firmly spoke out against such efforts."

He and German Foreign Minister Frank-Walter Steinmeier complained of routine violations of a cease-fire agreed in the February deal, negotiated by Germany and France.

A statement released by French Foreign Minister Laurent Fabius on behalf of the participants in the meeting called for quick de-escalation of hostilities to allow progress on longer-term aspects of the peace deal. Those include an array of political, security, humanitarian and economic questions such as the contentious issue of how much autonomy the rebel regions could achieve.

Tuesday's meeting was part of a new round of diplomatic efforts amid a spike in fighting in eastern Ukraine between pro-Russia separatists and Ukrainian troops. Ukraine and Western powers say Russia arms the rebels, which Moscow denies.

European countries have pushed for a diplomatic settlement while some U.S. legislators want to increase military aid to Ukraine. The conflict has killed more than 6,400 people since last year.

Steinmeier also called for a withdrawal of heavy weapons and free access for observers from the Organization for Security and Cooperation in Europe.

OSCE negotiators met Tuesday in Minsk, Belarus with representatives of Russia and Ukraine about implementing the February agreement, but reported no progress.

"We cannot talk about any concrete results today, but the work continues," said Heidi Tagliavini, the OSCE representative in the so-called Contact Group, which also includes representatives of Russia and Ukraine.

A sixth round of the talks was scheduled for July 7.