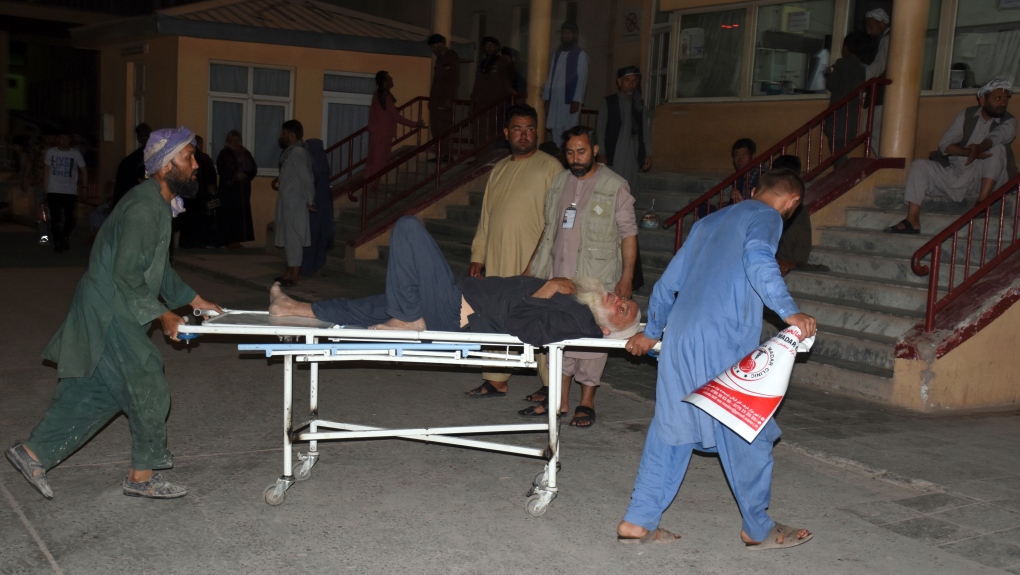 An injured man is transported to a hospital after a bombing in Mazar-e-Sharif, northern Afghanistan, Wednesday, May 25, 2022. (AP Photo/Masih Paeiz)
ISLAMABAD -

A series of explosions shook Afghanistan on Wednesday, the Taliban said, including a blast inside a mosque in the capital of Kabul that killed at least five worshippers and three bombings of minivans in the country's north that killed nine passengers.

The Kabul Emergency Hospital said it received 22 victims of the mosque bombing, including five dead. There were no further details on the blast that struck the Hazrat Zakaria Mosque in the city's central Police District 4, according to Khalid Zadran, a Taliban police spokesman in Kabul.

“The blast took place while people were inside the mosque for the evening prayers,” Zadran said, adding that they were waiting for an update.

The minivans were targeted in the northern city of Mazar-e-Sharif after explosive devices were placed inside the vehicles, according to Mohammad Asif Waziri, a Taliban-appointed spokesman in Balkh province. He said the explosions killed nine and wounded 15.

All the victims in Mazar-e-Sharif were from the country's minority Shiite Muslims, according to a police official who spoke on condition of anonymity as he was not authorized to give details to the media.

The ISIS claim of responsibility was posted on the Sunni militant group's Aamaq news agency. The statement said IS targeted three buses with improvised explosive devices.

There was no claim of responsibility for the Kabul mosque explosion but it also bore the hallmarks of the regional affiliate of the ISIS group, known as ISIS in Khorasan Province, or IS-K.

The ISIS affiliate, which has been operating in Afghanistan since 2014, is seen as the greatest security challenge facing the country's new Taliban rulers. Following their takeover when they seized power in Kabul and elsewhere in the country last August, the Taliban have launched a sweeping crackdown against the IS headquarters in eastern Afghanistan.

Convoy participant Pat King was involved in the planning and logistics of the Freedom Convoy protest, despite denials of his participation by organizers, according to court documents obtained by CTV News.

Two climate change protesters were arrested after they glued themselves to the frame of a famous John Constable painting hanging in Britain's National Gallery, the central London museum and police said.

The 30 NATO allies signed off on the accession protocols for Sweden and Finland on Tuesday, sending the membership bids of the two nations to the alliance capitals for legislative approvals -- and possible political trouble in Turkey.