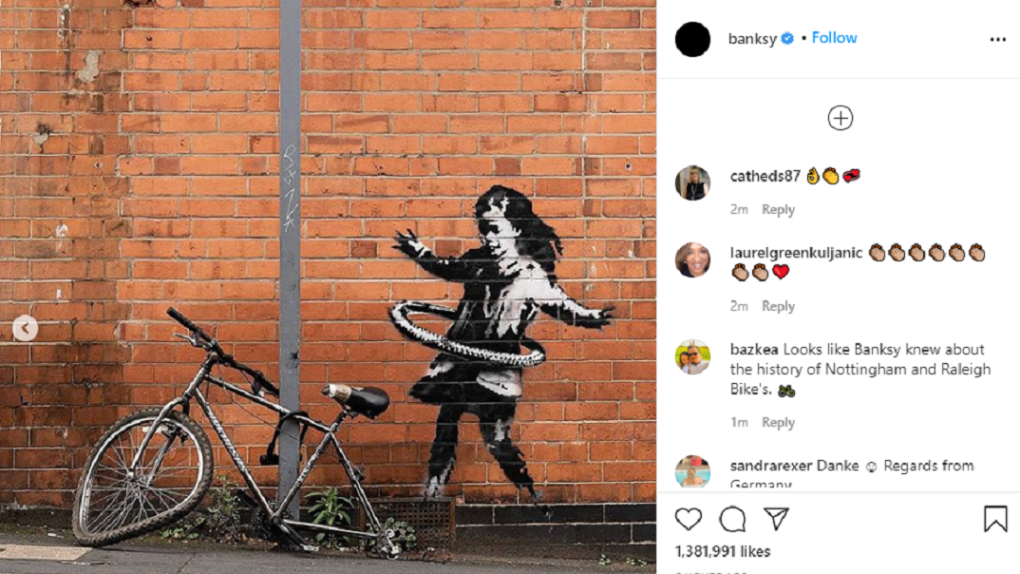 TORONTO -- After much speculation, street artist Banksy has claimed responsibility for a new piece of artwork in Nottingham, England, showing a young girl hula-hooping with a bicycle tire.

The graffiti artist posted a picture of the artwork to his Instagram feed Saturday. Though he did not include a caption, the reclusive artist often claims responsibility for the anonymous pieces on social media.

Painted outside a beauty salon in Nottingham, the work shows a young girl hula-hooping with a bicycle tire. According to reports, the artwork was first spotted Tuesday next to a bicycle that is missing its back wheel.

Amid speculation over whether the piece was a Banksy, a screen was fitted to cover it, according to BBC.

In July, Banksy filmed himself dressed as a cleaner spraying graffiti on the London Underground in a bid to encourage people to wear masks amid the COVID-19 pandemic. In the clip, Banksy paints rats -- one sneezing, another using a mask as a parachute, and another holding a bottle of sanitizer -- before tagging the train with his moniker. The caption in the post reads, "If you don't mask - you don't get."