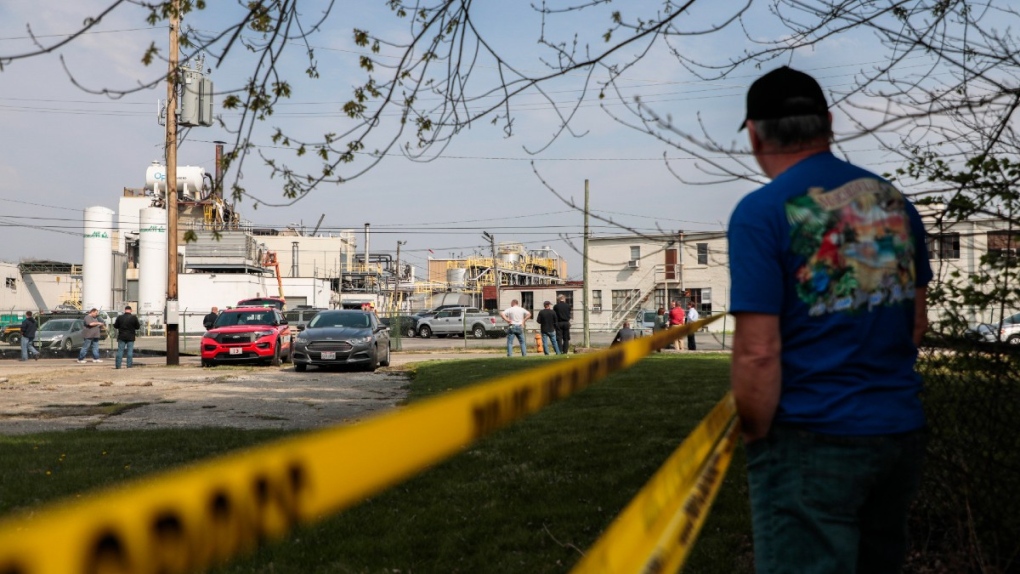 A retired employee of the Yenkin-Majestic Paint company watches as first responders work the scene of an overnight explosion at the facility, on April 8, 2021 in Columbus, Ohio. (Joshua A. Bickel / The Columbus Dispatch via AP)

COLUMBUS, OHIO -- One person was killed and eight others were injured in an explosion and fire Thursday at a paint manufacturer's plant in Ohio's capital city, firefighters said.

Authorities in Columbus were investigating what caused the explosion shortly after midnight at the Yenkin-Majestic Paint facility. They said some of those hurt were able to get out of the plant. Others were rescued and taken to the hospital.

All of the injured were in stable condition later Thursday, including two initially listed in critical condition, according to the Columbus Division of Fire.

The fire was eventually extinguished and the deceased employee was found in the rubble of the collapsed building, Battalion Chief Steve Martin said. The employee was identified as 44-year-old Wendell Light, a press room supervisor for the company, which makes paints, resins and other coatings.

The company hired environmental contractors to ensure that runoff from the firefighting efforts is contained and removed, and the Ohio Environmental Protection Agency's Emergency Response section is overseeing that work, Ohio EPA media co-ordinator Anthony Chenault said in an email.