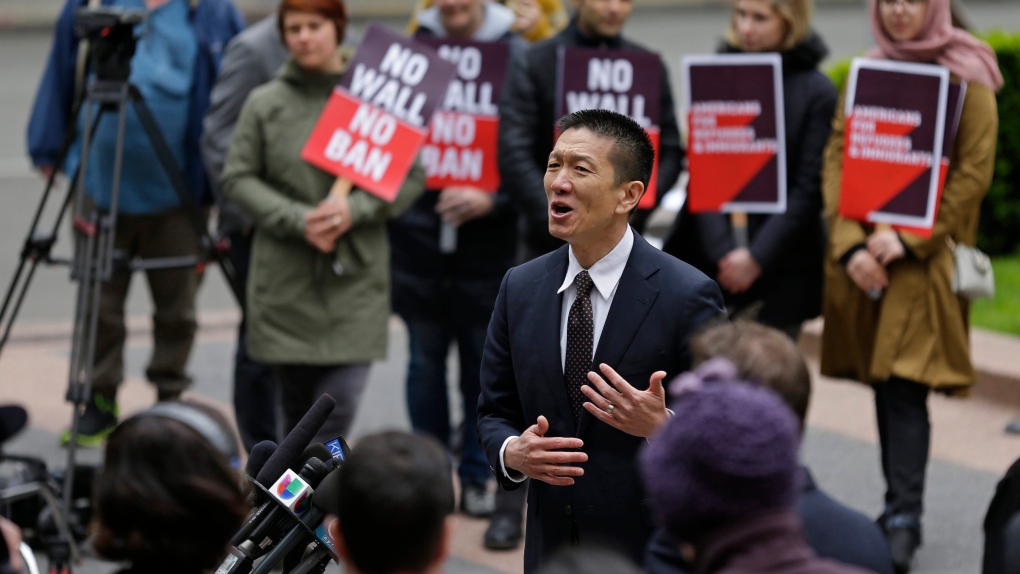 The developments came as lawyers on both sides of the issue are preparing for yet another round of appeals court arguments next month. They're the latest sign that after nearly 10 months, the battle over the president's travel restrictions -- and whether they represent the "Muslim ban" he promised during his campaign or a legitimate effort to improve national security -- is far from over.

"The president is making every effort to implement a campaign promise that's un-American and unconstitutional," said Mark Hetfield, president of the refugee support organization HIAS. "The only way to stop him is through the courts."

Last month, a federal judge in Hawaii blocked most of Trump's third travel ban just before it was due to take effect. A judge in Maryland separately blocked it to a lesser degree, saying that Trump could bar people from six mostly Muslim nations -- Chad, Iran, Libya, Somalia, Syria and Yemen -- as long as they did not have "bona fide" relationships with people or organizations already in the U.S.

The travel ban also applies to travellers from North Korea and to some Venezuelan government officials and their families, but the lawsuits did not challenge those restrictions.

The Justice Department sought to put the Hawaii judge's ruling on hold pending arguments scheduled for Dec. 6 at the 9th U.S. Circuit Court of Appeals in Seattle. The three-judge panel due to hear those arguments agreed in part on Monday, saying in effect that the ruling from U.S. District Judge Derrick Watson in Honolulu went too far.

But the 9th Circuit rejected the government's request to let the latest travel ban take effect as written pending the outcome of the Hawaii case. Instead, they adopted an approach similar to that of U.S. District Judge Theodore Chuang in Maryland -- and to the U.S. Supreme Court, which ruled in a case challenging the second travel ban that those with bona fide connections could enter the country.

The Maryland case is due to be argued before the 4th U.S. Circuit Court of Appeals on Dec. 8.

Trump's second travel ban, like the first one, was a temporary measure, and when it expired, he replaced it with the third -- a version designed to be permanent.

"We are reviewing the court's order and the government will begin enforcing the travel proclamation consistent with the partial stay," U.S. Department of Justice spokeswoman Lauren Ehrsam said in a statement. "We believe that the proclamation should be allowed to take effect in its entirety."

As a companion measure to his travel ban, which applies to those seeking to move to or visit the U.S., Trump last month also announced a new policy on admitting refugees as his previous 120-day refugee ban ended. It imposes tight new restrictions on refugees from 11 countries that have been deemed to warrant extra screening and it indefinitely suspends a program that reunites refugees in the U.S. with their overseas spouses and children.

Under the new policy, for 90 days applicants from those countries will be considered "case-by-case," and only refugees whose admissions are "deemed to be in the national interest" might be approved. The 11 countries are Egypt, Iran, Iraq, Libya, Mali, North Korea, Somalia, Sudan, the Republic of South Sudan, Syria, Yemen. The order also applies to certain stateless Palestinian males.

More than half of refugees in the pipeline to be admitted into the U.S. come from those countries, according to the State Department.

And according to the lawsuit filed by the refugee assistance groups in Seattle on Monday, more than 80 per cent of the refugees resettled from those 11 countries over the last two fiscal years have been Muslim. Thus, halting their admission will disproportionately affect Muslim refugees, the lawsuit said.

The administration has said that during the 90-day period, it would shift resources away from dealing with refugees from the 11 countries needing additional scrutiny. The effect of that, the lawsuit said, will be much longer bans on those refugees: Many are likely to have medical screenings or other requirements expire, forcing them to start over.

"This prioritization of applications from (other) countries will have the effect of significantly increasing the percentage of Christian refugees resettled here while significantly decreasing the percentage of Muslim refugees," the lawsuit said. "The Memorandum thus implements the Trump Administration's oft-repeated desire to ban Muslim refugees while prioritizing the resettlement of Christian refugees."

The Department of Homeland Security has said it does not comment on litigation, but the Oct. 23 memo laying out the new policy said it was necessary for national security.

Among the plaintiffs in the Seattle case are the Jewish Family Service of Seattle, refugees who are near the final stages of resettling, and Allen R. Vaught -- an Iraq war veteran from Dallas, Texas, who said the travel ban has "derailed efforts to get my last surviving Iraqi translator, who served bravely alongside U.S. military forces for many years, to the United States."

"That executive order is inconsistent with the American values I fought for as an officer in the United States Army," Vaught said in a written statement.

The refugee ban is also being challenged in other cases, including one filed last week in Seattle by a Somali refugee asking a federal judge to let his wife and young children join him in the U.S.