Investigative correspondent Avery Haines reveals a global criminal organization behind romance scams. Watch the W5 documentary Saturday at 7 p.m. on CTV. Below is her account of the tragic consequence resulting from one of these scams.

TORONTO -- It is an eerie feeling to go through the computer of a dead woman. Touching the keyboard, scrolling through the chat history, looking at the photos. It is a terrible invasion of privacy. Our computers are, after all, the holders of our secrets, storing everything we’ve ever searched up, the messages we’ve sent, the pictures we’ve taken.

The computer belongs to a woman named Colleen. It was given to me by her grieving sister, Karen Ringham, in the days leading up to the one-year anniversary of Colleen’s death by suicide in Delta, British Columbia. (W5 is only identifying Colleen by her first name at the request of her family for privacy.)

Karen gave me her sister’s computer in the hopes I could find some answers about how her gregarious and beautiful sister could have been so tragically duped. Colleen was the victim of an elaborate romance scam that left her destitute.

But her death was not over the lost money. Her three-page suicide note revealed that the scam had spiralled into a sophisticated con that had Colleen believing she was about to be arrested.

She wrote: “I was advised yesterday that the authorities in Toronto know my first name and it is only a matter of time before they come to arrest me. I am too old and too law abiding to end up in jail.”

On October 9, 2018, Colleen ended her life. The RCMP was called. They read the suicide note where Colleen documented how she had given over almost $1 million. But the RCMP did no investigation into the fraud. They didn’t even open her computer to look for clues.

So W5 did what police failed to do. We took Colleen’s computer to a forensic investigator in Toronto, who cracked her password in less than one second.

Copying the hard drive, we were able to see that Colleen had been doing Google searches for protection orders, women’s shelters and the RCMP. She clearly thought her life was in real danger. And then there were the thousands of chats, with someone who went by the name of Ryan Scott, an online man she had fallen in love with. Little did she know that Ryan was a fraud and his photos were stolen from someone else to carry out an elaborate scam.

If police had simply examined Colleen’s computer they would have found the dating site where ‘Ryan’ first lured in Colleen. A key piece of evidence that could have been helpful in tracking down the scammers, according to forensic analyst Matthew Musters from Computer Forensics Inc.

“There’s likely a good amount of information at [the dating website], that we don’t have here,” he said. All it would have taken, Musters says, is a simple production order from police.

In a statement to W5, the RCMP said there was no fraud investigation because “Nationally and internationally, the RCMP does not have a mandate to pursue individual cases. However, by working with municipal, provincial, national and international law enforcement, and government and private sector partners, the RCMP is working hard to prevent, detect and deter organized crime groups that target Canadians and impact the economic integrity of Canada.” (Read full statement here.)

The RCMP showed no interest in trying to track down the person whose images had been stolen to rip Colleen off. Our investigation led us to a completely innocent Canadian man, named Tommy Kean, who says his photos have been used again and again by scammers. He figures at least 70 women have reached out to him over the last 5 years.

“The people that find me...are telling me they fell in love with me or the pictures, and assuming it’s me. It’s horrible,” he said. 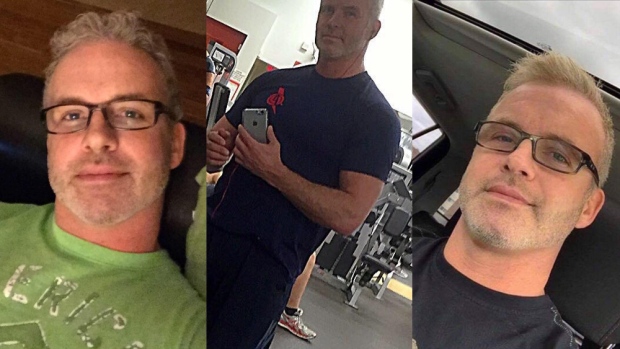 A composite image of Tommy Kean, the innocent Canadian whose photos were used again and again by online scammers (Supplied to W5)

Tommy had no idea though about the tragedy of Colleen in British Columbia. It left him stunned: “I don’t know what to say. That’s shocking, that’s disgusting, I’m very sorry for the family. Where are the authorities on this? They didn’t even reach out to me to let me know.” (Watch the full interview here)

Tommy says he repeatedly tries to flag the fake accounts that have been set up using his pictures on Facebook and Instagram, but more and more phoney profiles keep popping up.

Facebook tells W5 in a statement that the social media platform “is built on the principle that people who use our services are who they say they are.” The statement continues: “We have a dedicated team that works around the clock to detect and block fake accounts and we remove large numbers of impersonating accounts on a consistent basis.” (Read the full statement here.)

What we have discovered is that the way Colleen was conned has all the markings of a notorious crime syndicate called The Black Axe, which is operating in 26 countries, including Canada.

Beyond the invasiveness of reading Colleen’s private emails and texts, the most difficult part of going through her computer is looking at her pictures. The first photos are of Colleen and her sister Karen, hugging and laughing on vacation. The last photos are of every single thing Colleen owned...the art, furniture, even the Christmas ribbons, being put up for sale to try to satisfy the ruthless scammers who Karen says stole her sister’s money and her life.

“This invisible man – took everything that she had worked for, her family, her friends, her home. And he also took her life,” said Karen.

W5’s 'The Invisible Man' investigates a global crime syndicate behind romance scams, which has a presence right here in Canada. Watch Saturday at 7pm on CTV