Warning: Some readers may find the details of this story disturbing.

PUTNAM, Ont. -- For seven weeks, a man, who asked to be identified only as Elijah, worked at a farming facility in Putnam, Ont., 30 km east of London.

His job as a hog farm technician at the Arnold Barn, which is managed by Paragon Farms, included tasks like feeding, moving and vaccinating pigs. W5 has agreed to protect Elijah’s true identity.

However, Elijah had another motive for working at the barn. Using a hidden camera, he recorded hours of video footage at the facility.

“It’s not necessarily the safest job that I could be working, but I did it because I see that these animals are suffering,” he told W5’s Sandie Rinaldo.

Animal Justice, a Canadian animal law advocacy organization, hired Elijah to go undercover, and shared some of the video he recorded with W5.

The footage documents what Elijah claims are instances of animal abuse and neglect, including disturbing images of farm workers forcefully slapping and hitting pigs with plastic boards, and jabbing them with pens.

Other filmed incidents include workers discussing how pregnant sows had been deprived of drinking water for several days, workers castrating male piglets without the use of painkillers and filthy conditions in the barn.

W5 offered to show the video to the general manager of Paragon Farms, with an opportunity to comment afterward. A lawyer acting for Paragon sent W5 a written statement indicating, in part, that “Paragon Farms immediately inspected the barn in question” and “welcomed an inspection by … the Animal Welfare Services branch (of the provincial government) within hours of being notified of the allegations. No material concerns were identified.”

The statement added that a veterinarian “with expert certification” inspected the animals and “has not identified incidents of abuse or neglect.”

THE END OF UNDERCOVER WHISTLEBLOWERS?

Camille Labchuk, executive director of Animal Justice, believes that because there is no proactive provincial monitoring or inspection of farm facilities, neglect and abuse of livestock remains hidden and free of scrutiny. Only a complaint can trigger an investigation of a farm by provincial authorities.

“We urgently need more transparency in the food system because the meat industry keeps animals behind closed doors without any government oversight or inspection,” Labchuk said.

“There's no way for Canadians to learn the truth unless a brave whistleblower goes in there and films this footage and exposes it to the public.”

Hidden camera video filmed by animal rights groups and shared with journalists have helped raise public awareness of conditions and animal mistreatment in farms and slaughterhouses. 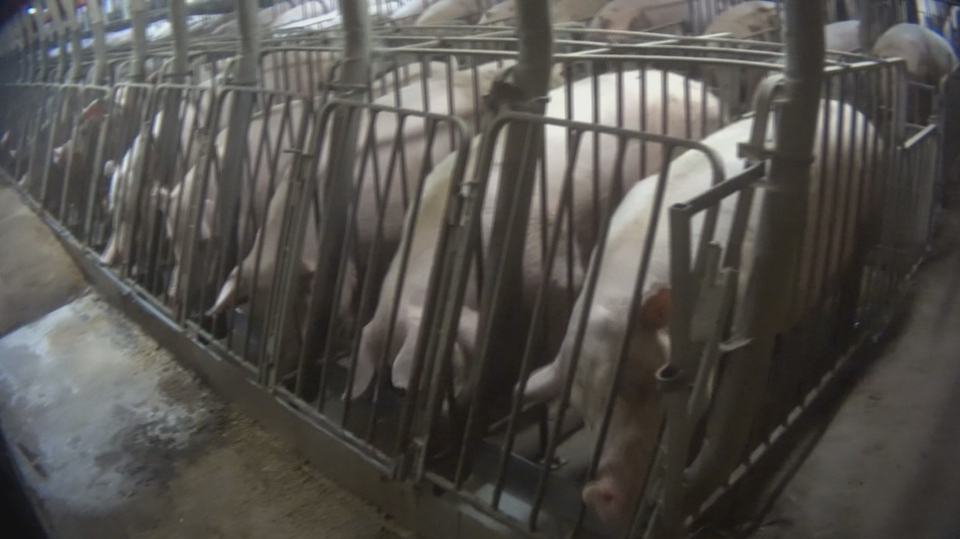 But undercover filming by employee activists at livestock facilities may soon become outlawed in Ontario.

This past June, the Ontario government partially proclaimed the Security from Trespass and Protecting Food Safety Act, known initially as Bill 156.

Promoted by Ontario’s Minister of Agriculture, Food and Rural Affairs Ernie Hardeman as a way to improve the protection of farms, farmers and their livestock from trespassers and biosecurity risks, the act may soon make it illegal for undercover activists like Elijah to work and film at farm facilities under “false pretenses.”

A similar law, initially known as Bill 27, was passed in Alberta late last year and Manitoba is looking to follow suit.

Critics call them “ag-gag” or agricultural gag laws. Modelled on U.S. laws that have been introduced in 29 U.S. states since 1990, only six states still have these laws on the books. The rest have been defeated or deemed unconstitutional.

Professor Samuel Trosow, who teaches law at Western University in London, believes these types of laws are problematic.

“The way that Bill 156 has been written, same thing for the Alberta law, does violate Section 2(b) of the Constitution that guarantees everyone freedom of expression,” Trosow told W5’s Sandie Rinaldo in an interview.

While a section of Ontario’s Security from Trespass and Protecting Food Safety Act currently prevents people from interfering with animal transport vehicles, the provision regarding false pretenses, which may prevent employee whistleblowers from filming inside farm facilities, has yet to be proclaimed.

Labchuk intends to challenge the law if and when that happens.

“If you ask ordinary Canadians what they think, they're appalled when they hear that the government's trying to shut down transparency on farms and hide from them where their food comes from.”