The trans woman taking on the doomsday church

AYLMER, ONT. - Rayne Gelinas has a crystal clear memory of the day the Pride flag was raised in her small town.

“My partner [and I] cried...because we truly never thought we’d see that symbol of acceptance in this small community.”

With a population of just 7,500, Aylmer, Ont. is a rural community with deep religious roots. There are more than a dozen churches, as well as an Amish and Mennonite community.

Gelinas came out as transgender in 2016, just one year before the Pride flag was raised in downtown Aylmer. Transitioning in a small town where “everybody knows your business” was terrifying.

“It sent shockwaves through the community. I would be scared just to go to the corner store. I mean literally terrified to do an average thing that all of us do every day. I would get pointed at. I would get stared at.”

And so when that rainbow flag was hoisted, Gelinas felt accepted by the town.

“That told me, and others in the LGBT community, that we see you, we know you’re here and we support you.”

That feeling of acceptance, however, did not last long.

In 2020, after complaints from one of the churches, the town made a decision to hold off on any further flag raising ceremonies. Gelinas says with one simple gesture that feeling of unity...vanished: “It’s a slap in the face. It’s hurtful.”

The same church that made the Pride flag complaint is now responsible for a much larger division in the community. In this past year of COVID-19, the Church of God Restoration, and its fervent pastor, Henry Hildebrandt, have turned the once sleepy town upside down.

The tiny fundamentalist Christian sect has just 21 congregations around the world, including in Manitoba, Alberta and in Aylmer. Followers have a strict and literal interpretation of scripture. They wear modest clothing,they aren’t allowed on the internet, they are encouraged to stay separate from the outside world, and they shun modern medicine.

W5 has interviewed former church members who describe the sect as a “cult” with rules that control every aspect of their life, from what colour they paint their home and how many buttons they have on their vests, to whom they marry and what books they can read. The last time the church made headlines was in 2002, during a Children’s Aid Investigation into allegations of child abuse. (see pg. 20)

And now, the church is back in the news. Since the start of the pandemic, Hildebrandt has emerged as a hero to the anti-lockdown crowd, with his firebrand messaging against the government, police and the medical community over public health restrictions.

For months, the pastor has antagonized local authorities by holding Sunday services indoors and in the parking lot, in violation of the ban on public gatherings. He is a familiar face at so-called freedom rallies across the province, and was front and centre at a rally in Aylmer last November that saw thousands of protesters marching through the downtown streets.

Alymer’s mayor, Mary French, says downtown businesses have been hard hit by the never-ending headlines about the anti-mask, anti-lockdown church.

“I never, ever imagined that Aylmer would get headlines for this reason. I would love all the notoriety if it was for some other reason, like we did something really awesome. Everybody knows where Aylmer is now, but it's not for the best reasons.”

In a wide-ranging interview with W5, Hildebrandt claims the lockdown measures are a violation of constitutional rights. In his condemnation of quarantine hotels, he repeatedly ‘accidentally’ compares them to concentration camps, telling W5 that his older congregants see “signs of Hitler.” And the pastor says the attention he is getting now is gearing towards fulfilling a prophecy about the looming end of the world. Church of God doctrine predicts their ranks will swell leading up to the apocalypse.

Rayne Gelinas has become one of the most outspoken critics of the church’s messaging.

“I have an axe to grind. I'm not going to lie about that. But when I [saw it get] to the point where it wasn't just [trying] to oppress me, but actually putting people's lives, businesses, the town's image, all in jeopardy? Somebody had to stand up.”

Gelinas has organized weekly protests on Sundays on the highway that runs past the Church of God Restoration. She has even taken to postering pictures of Hildebrandt around town with the words “Lock him up.” 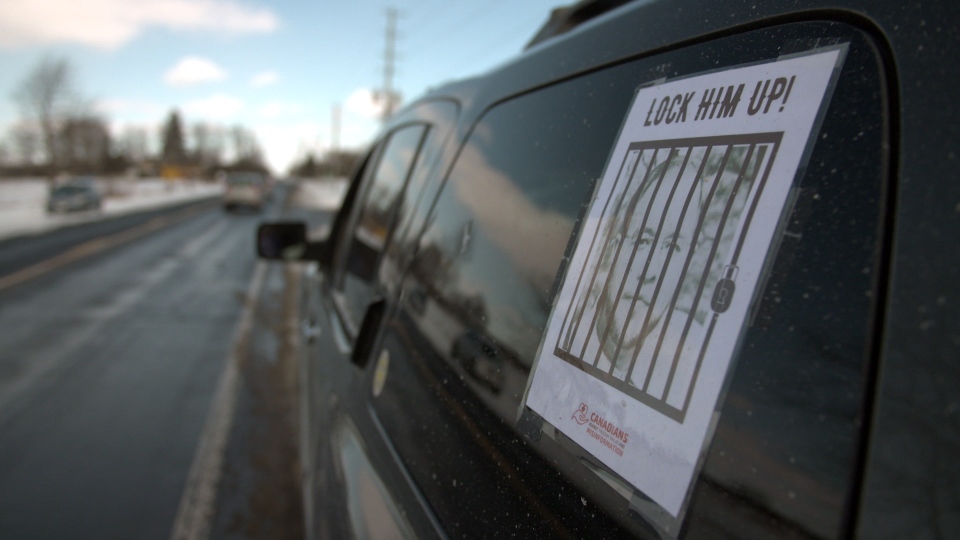 “I think this goes so much deeper than a mask. The Church of God Restoration and Henry Hilderbrandt want to be able to control this town and subject this town to what he believes is an appropriate way of life. And for someone like me, those two ideologies aren't going to work out my favour in the long run. Do you know what I mean?”

Gelinas says she has been intimidated online and in person by the church and its new supporters in the anti-lockdown movement.

“Of course it's scary for me. They don't believe I am a human being, they believe I am an abomination to God, so, yeah, I have to stand up and not allow that kind of ideology to take hold because we've seen in history when you have fundamental, flawed ideology take hold and become the norm very, very, very bad things happen and it starts like this, right? It starts with low rumblings and over time it becomes out of control. And I refuse to let us get to that point.”