Meet the Ont. police dog who has helped crack some of the province’s worst murders

Warning: Some readers may find the details of this story graphic.

TORONTO -- On a cold January night, a police dog and his partner made a discovery that would expose one of Canada’s most notorious serial killers.

Sgt. Derrick Gaudet and his canine partner, Major, were outside a home where Bruce McArthur stored his landscaping equipment. It wasn’t the garage or the yard that caught Major’s attention, it was a planter.

“Eventually he got his nose into one. And I went over, and I kicked it with my foot very, very hard. And then he looks back at me and goes still,” Gaudet told W5’s Molly Thomas.

Investigators would go on to learn that McArthur had been burying his dismembered victims in planters. Major’s gruesome discovery helped convict the serial killer for the murders of eight men in 2019.

Three years earlier, Major made another grisly find and helped solve another homicide.

In 2016, Melissa Cooper was murdered and her dismembered body was dumped in garbage cans behind a Toronto butcher shop. Major was brought in and helped locate Cooper’s arm.

Major’s specialty is finding cadavers. Which means that many of his investigations are macabre. But it’s all in a day’s work when you’re a cadaver dog.

“I've been a police officer for 31 years and I've seen lots of horrific things,” Gaudet said, but he takes comfort in knowing what Major’s discoveries mean for families.

“We're doing a good thing here, right. We're actually bringing loved ones back to their families so they can have peace.”

A DOG OF MANY SKILLS

“I think he has an excellent nose, far better than any of our instruments. And so that’s just something we can’t comprehend at this stage,” says Shari Forbes, the director of Canada’s first body farm, a facility that studies decaying human remains.

“If I can smell a drop of blood in an Olympic-size swimming pool, they can smell it in six Olympic pools.” 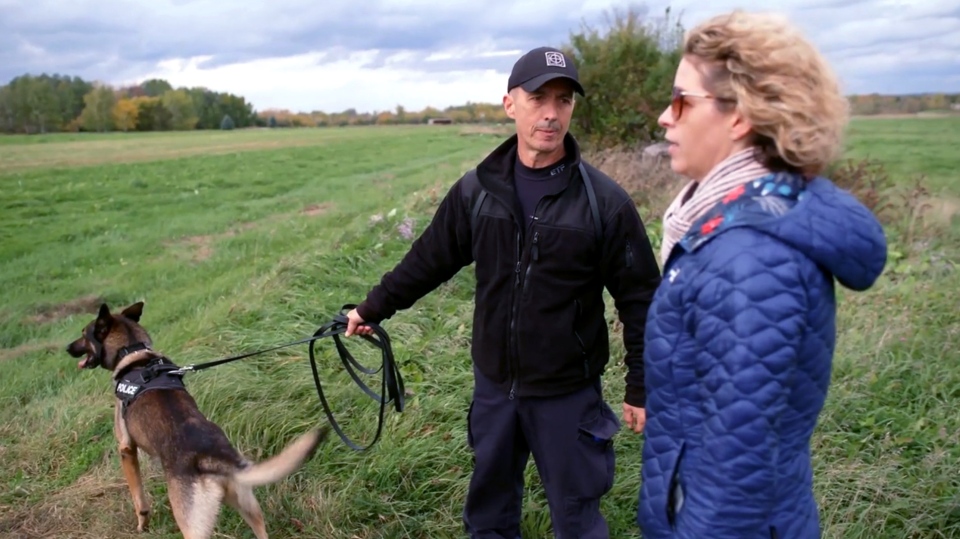 That’s one drop in 15-million litres of water. Just to put that in perspective, that’s about 50,000 bathtubs worth of water.

However, detecting the odour of human remains isn’t Major’s only skill.

He’s one of the few cadaver dogs with Toronto police that’s cross trained, meaning he can also track fresh human scent. It’s a talent that came in handy when he found an Alzheimer’s patient who wondered off in the dead of night near a highway.

On Jan. 2, Major will turn eight. With such a stellar police record, you’d think his birthday would be cause for celebration. However, it’s bitter sweet. Most police dogs retire at nine, whether they like it or not.

Jason Donohoe runs one of the largest mobile veterinary clinics in the province and cares for over 150 police dogs. He’s seen firsthand the toll police work can have on his four-legged patients.

Donohoe has Major on supplements to help with his joints, but retirement is looming and he’s worried because most police dogs don’t retire well.

“The drive that these dogs have, and the energy level is not always suitable to being a pet,” Donohoe told W5. “I think in most cases, they're, you know, they're disappointed when their person gets up and starts the truck and drives away without them.”

But Gaudet has no plans to drive off without Major. He can retire anytime, but says he’ll keep working as long as his partner wants to stay on duty.

“We'll go out together. That’s how I plan it anyways, so we’ll see how it goes.”