OTTAWA - Where were you when you realized the debate about climate change was over? I can pinpoint the exact day for myself, back in 2015, when Mark Carney gave a speech on the subject to a group of insurers.

Let me back up. The fight against climate change has entered a new stage. Now instead of arguing about whether it’s even happening, most people – including governments and businesses - are focused on what to do about it. And even there, it’s less a conversation about what needs to be done, than about how fast we can get there. That’s a big change from just a few years ago. And it’s not an exaggeration to say that Carney can be given a lot of credit for making that change happen.

Mark Carney may be known to most Canadians as our former central bank governor, but globally, he’s better known as the former governor of the Bank of England, and in certain circles, as the former head of the global Financial Stability Board. That last one is a kind of rule-setting body for the world’s finance companies, designed to make sure they don’t run us off the rails as they almost did in the credit crisis of 2008. In his roles at the Bank of England and with the Financial Stability board, Carney set in motion a series of changes six years ago that seriously sped up the process of tackling climate change.

The ripple that started the wave came in the most unlikely place for something interesting to happen: a speech by Carney at a dinner hosted by the big insurance company Lloyds of London.

In that 2015 speech, Carney said the rules were about to change. As top regulator, he was going to insist that big insurance and finance firms start counting the real-world cost of climate change – not just today’s costs, but future ones. That included being realistic about what was going to happen to their businesses as governments introduced policies aimed at fighting climate change.

For instance, if a pay-to-pollute model like a carbon tax was introduced, some big businesses in the energy sector might find it made more sense to leave their resources in the ground. That it just might be too costly to keep producing carbon-heavy products.

It was a suggestion that, as Carney describes, drew “howls of outrage” from the businesses involved. But fast forward to 2020 and one after another, big oil companies did exactly what Carney said they might: they planned to leave some of their oil in the ground, and walk away from some investments altogether.

It’s pretty easy to draw a straight line between what Carney put in motion in 2015, and what is happening now.

When the biggest financial and insurance firms start calculating the real cost of climate, they change their behaviour. They also start passing those costs on to consumers. Who, in turn, change their behaviour. And rather than being focused on what is going to happen in the near future, these changes help all of us think longer term – something that is necessary when it comes to a slow-moving problem like climate change. Carney called it the tragedy on the horizon in that 2015 speech.

In his new book “Value(s),” Carney addresses the issue of getting people to measure the real value of something even if it’s in the future, or intangible. The play on words is simple – we value things based on a price we put on it. The question is how can we also incorporate our personal or social values, which have no price? 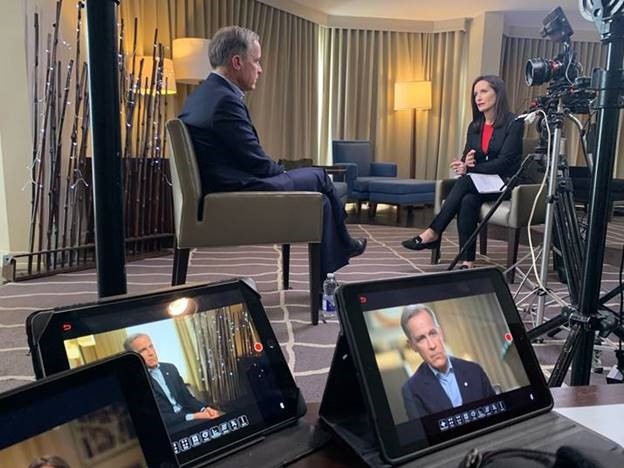 As a business journalist, I was already paying attention to Carney in 2015, but that speech caught a lot of us off guard. That climate action and business would share a headline just hadn’t been the norm. I remember thinking that once the folks who control the money are on board, action on climate change is inevitable. That it should be championed by this Canadian with his George Clooney looks, unassuming charm and global reach was a fascinating idea.

Though he has moved on from his role as the Governor of the Bank of England, Carney is still wielding a lot of influence. As the United Nations’ special envoy on climate action, he’ll be part of the group meeting later this year at a climate summit to try to establish a global pricing framework for carbon. It would be the first of its kind. Carney doesn’t like to think of himself as playing a leading role in the fight for climate change, though he will admit forcing banks and big business to take it seriously was a big step.

“I can imagine the genius of setting the goal and society agreeing on the goal is much smarter people, younger people, more innovative people will come up with better solutions to work solutions that complement and accelerate them. And that's what you want. So I'm one voice of many,” he tells W5.

In other words, he’d like so much progress to be made from here on in that his role comes to be seen as a bit part in a bigger story.