'It felt like a prison for kids': W5 investigates allegations of abuse at Ontario Training Schools

Trudging across the snow covered field onto the former grounds of the Brookside Training School in Cobourg, Ont. instantly snaps Rick Brown back to October 1963, when he was just 10-years-old.

“I was a loving kid. I was a kid that had a big heart, and my life stopped there. That’s what happened. I realized that recently. My emotional growth stopped the day I went into Cobourg,” says Brown.

Brown says he grew up in a dysfunctional home in Guelph, Ont. and that his father would often get drunk and physically abuse him and his siblings. So without strong parental guidance, Brown lashed out, getting into trouble with police for petty crimes.

Like thousands of other children in Ontario deemed unmanageable, Brown was sentenced by a judge to an indeterminate amount of time at the provincially-run reform institutions known between 1931 and 1984 as Ontario Training Schools.

Provincial government officials touted the 18 schools, peppered across the province, as the answer to unruly children.

Photos from the time show well treated, happy children getting an upgraded education, access to all kinds of sports and even training in the trades like woodworking and metal shop. The promise: bad kids would be transformed into productive and lawful members of society.

What Brown and countless other children discovered was that Training Schools were not as advertised.

“It was awful, it was scary, it felt like a prison for kids,” he says.

Brown has now joined a $600-million class-action lawsuit against the Ontario government. Their lawyer says the evidence of systematic state sanctioned abuse at these institutions was well known by officials.

Over the years the government has quietly acknowledged the abuses that had gone on in training schools, settling individual claims with former students that included non-disclosure agreements.

As well, students who attended Grandview School for Girls, St John’s and St. Joseph’s Training Schools also received compensation and even apologies, but that’s where it ended.

Ontario’s Attorney General Caroline Mulroney is the one who can approve compensation for the remaining victims and even offer an apology, but for 5 weeks she and her staff declined W5’s repeated requests for a formal sit down interview.

With the deadline of airing this story fast approaching, we went to Queen’s Park to put the concerns of the victims to Ms. Mulroney. This was that interview.

“Well absolutely, its unacceptable and this is something we have to look at very closely and make sure that we’re protecting our children,” says Mulroney during an interview at Queen’s Park.

The leader of Ontario’s official opposition, Andrea Horwath, says it’s time for the government to finally do the right thing for all the victims.

But five decades after surviving months of physical and emotional abuse, Rick Brown is getting impatient with more government delays. On top of the class action lawsuit, he is also pushing for a public inquiry into the entire Training School program.

“Because this needs to be heard. This needs to get out to the world what happened to us. Because it’s been a dirty, little secret for way too long,” says Brown. 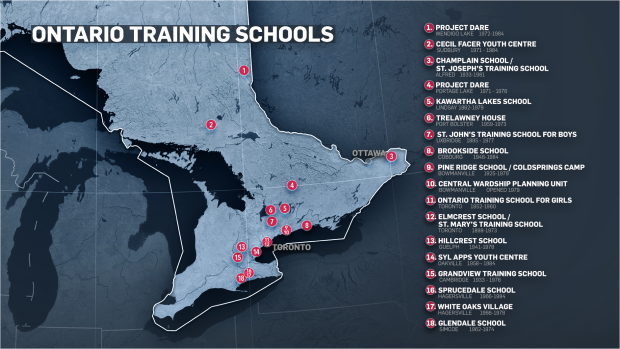