That passion brought the two cousins to a local fair in Binbrook, a small community on the outskirts of Hamilton, Ont., on a Saturday night in mid-September to compete at a demolition derby.

“You’re building a hot rod, essentially. We’re taking all these different pieces of different vehicles and stuff, assembling them into one,” Cody said. “And then you’re doing ultimate fighting.”

“It’s like an avatar, just like in the movie. You’ve created something that you run,” Rob added. “And it’s a part of you. That’s what really I find cool about it. Like it’s like an exoskeleton shell. You built this contraption and you control it.”

The Switzers come from a long line of demolition derby champions. Rob’s uncle was the first one in the family to try it in 1983. Then Rob’s dad gave it a go in 1985. When Rob turned 18, he continued the family tradition. 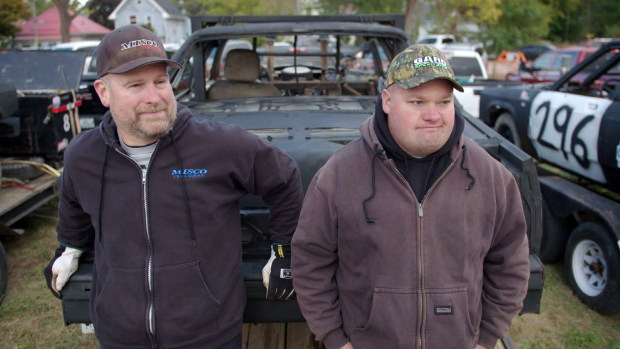 Despite the 20-year age difference, Cody has followed Rob’s career ever since he can remember: “It was exciting for me because I got to sit in the grandstands, and there’s that guy who’s my cousin out there, winning or doing fairly well, and he’s got my last name.”

When Cody turned 18, Rob helped him build his derby car and taught him how to compete. Since then, Cody spent every summer at Rob’s garage building cars and smashing them at derbies across Southern Ontario.

“I call him his protégé. I’m like, Cody learns from Rob. Cody wants to impress Rob. Rob encourages Cody,” said Rob’s wife Fleur Dolan who sometimes thinks of Cody as her third roommate. “Is he here a lot? Every day, every day!”

But Rob and Cody weren’t out to just win at Binbrook. At a qualifier for the Williams Cup, anyone who placed in the top 5 had a chance to compete at a derby to become Ontario’s Regional Demolition Derby Champion.

The cup is named after Walter Williams, who along with his identical twin brother Bill, started demolition derbies in Ontario in the late 60s. 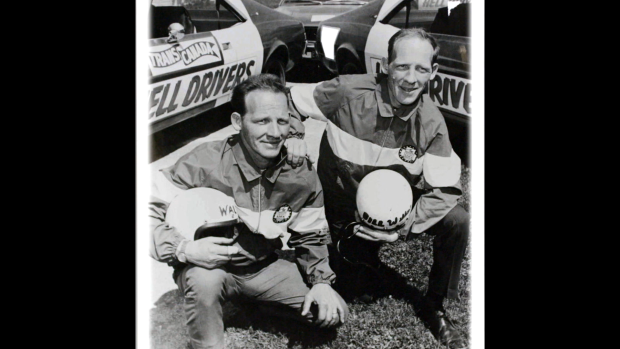 Walter Williams, along with his identical twin brother, Bill, started demolition derbies in Ontario in the late 1960s (supplied)

Sherry also enjoys seeing her family continue the legacy. Her son Brock checks over cars to make sure drivers don’t break or bend the rules.

“They’re there to reinforce the car and try and get away with stuff, and we’re there to catch it,” Brock said.

Despite winning the Williams Cup 3 times, Rob didn’t do so well at Binbrook. His car took a bad hit causing him to lose his back wheel. He finished 4th: “I’ve been stuck in 4th this year quite a bit. Would have been nice to get a little bit deeper and beat on Cody but that’s OK.”

Cody is a two-time Williams Cup champion and didn’t disappoint at Binbrook. He stole the night with two first-place wins, earning $1,500. But he already had plans for the money. He’ll need it to build his car for the Williams Cup: “It’ll go right back into the cars just to fix what we broke tonight.”

Winning has become more meaningful for Cody because he knows there might not be many more chances to compete against his older cousin. At 48, Rob plans to retire soon.

“I threatened to retire long ago. I told everybody that when I won the Williams Cup I’d retire. I would think soon, probably in the next 3 to 4 years,” Rob said.

As for Cody, he’ll keep building and demolishing cars as long as he has a shot at taking on his main rival and cousin Rob: “He went from the guy I really look up to and was a kid in the grandstand, now as much as I want him to do well, he’s the one I want to beat.”

Watch W5's 'The Big Crunch' this Saturday at 7pm on CTV