The 27-year-old from Kelowna, B.C. was born with cystic fibrosis – a genetic disorder that causes mucus to clog her lungs and damages her organs.

She is also infected with a superbug – a bacteria called Pseudomonas aeruginosa that antibiotics can’t kill.

“(The superbug) will never go away so you are constantly sick and the older you get, the worse it gets,” said Nicole, who has documented her painful journey in video diaries that she posts online.

She uses puffers, an oxygen machine and takes a hundred pills every day to control symptoms like fever and nausea. But she's still in and out of hospital every few months.

Like all CF patients, Nicole knows her lungs could fail at any time.

That’s why she travelled to the U.S. to become the first Canadian CF patient to try an experimental treatment called phage therapy – using viruses to kill bacteria. She’s part of a group of 13 patients receiving care at Yale New Haven Hospital in Connecticut.

“I'm at a point where this is my last resort,” said Nicole. 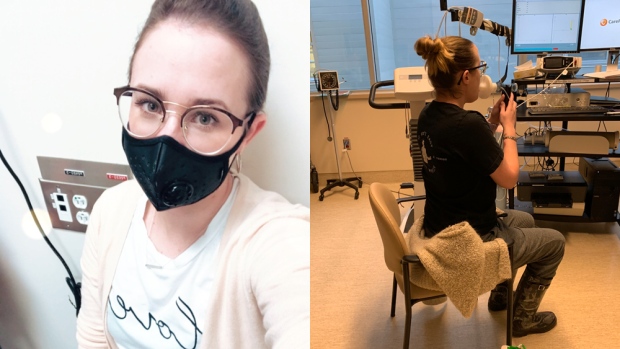 Phages are viral smart bombs, blowing up trillions of bacteria every single day. They achieve this feat by attaching to a bug, injecting their DNA to produce more phages until the bacteria explodes, expelling billions of baby phages that search for new targets.

They exist everywhere bacteria is found – on skin, in water, soil and rotten food.

The phages used to attack Nicole’s superbug, were extracted from municipal sewage, and purified in the lab by Ben Chan, a Yale University biologist.

“It’s something that we can dredge out of nature and put into a person and make a big difference in their quality of life…it’s the ultimate dream,” said Chan.

Every day for one week in November, Nicole inhaled a dose containing billions of phage that Chan prepared.

It's her second treatment in seven months and she says they’re already making a difference.

“About three to four hours after my very first dose, I could smell flowers for the first time in about 15 years."

“My lungs started feeling like I could breathe just a little bit better,” she said.

Her lung function, just 54 per cent before treatment began, is now up to 71 per cent.

And she told W5 she’s been coughing up a lot of the sticky mucus that coats her lungs – a sign her infection is clearing.

Dr. Jonathan Koff, the pulmonologist monitoring her phage therapy, says the results are promising and he plans to launch a larger study.

“We are seeing very clearly that we are dramatically reducing the amount of bacteria in the sputum during the treatment and after, which is very encouraging,” he said. In some patients, phage therapy is as effective as CF drugs.

"These are small patient numbers and we have to do our due diligence with clinical trials, but it certainly gives us some optimism that this type of intervention could be effective.”

Doctors gave her less than 1% chance of surviving, but phage therapy restored her good health. News of her dramatic recovery boosted phage’s profile – and the hope the treatment will be offered in Canada.

It would be a huge relief for Nicole. Travelling to the U.S. is expensive, costing her and her husband Ben thousands of dollars for each trip. Recently a friend set up a GoFundMe account to help with expenses.

Another concern – every time she’s around other passengers, she worries she'll pick up another infection and further compromise her health.

"One hundred per cent, if there was a chance to get the phage without coming (to the U.S.) I would do that,” she said.

Phage therapy may not be available in Canada but it did start here over 100 years ago.

But phages were abandoned in favour of antibiotics, which could be mass produced and were much more profitable. Eventually, D'Herelle moved to the Soviet Union to continue his work. And phages were relegated to the fringes of mainstream medicine.

Over the years, bacteria evolved and now many are resistant to our antibiotic wonder drugs. Patients around the world are developing treatment resistant infections after joint replacements, organ transplants and cancer therapy.

A recent report predicts superbugs will claim the lives of almost 400,000 Canadian in the next 30 years.

And the World Health Organization is warning we are entering a post antibiotic age – where even a simple skin infection can kill.

So phages are making a comeback, thanks in large part to another Canadian scientist, Steffanie Strathdee. She witnessed their potential firsthand, when she used them to save her husband’s life.

ON THE BRINK OF DEATH

In 2015 Steffanie and Tom Patterson, a psychiatry professor, were on vacation in Egypt when he began vomiting after a meal. They suspected food poisoning but it turned out to be something far more serious.

He was flown to Frankfurt, Germany where physicians diagnosed acinetobacter baumannii, a potentially deadly pathogen in his pancreas.

“The doctor said there is a giant abscess in his abdomen the size of a football and the doctor picked up this flask and was showing me this murky brown putrid fluid,” said Steffanie, an associate dean of global health science at the University of California, San Diego.

“I knew that meant there was some bacteria that was growing inside the cyst in his abdomen (...) but I figured, well there's antibiotics that will cure that."

Airlifted back to their home near San Diego, Tom was admitted to the hospital at the University of California San Diego Health, where he fell into a coma for several months.

“His kidneys were failing and he was beginning to develop liver failure. So he was developing multi organ failure. And you know it's hard to predict how long he would have lived. But it would have been inevitable, something would have pushed him over the edge,” said Dr. Robert Schooley, an infectious disease specialist at UCSD and family friend who oversaw his care.

Every antibiotic they tried failed to contain his raging infection. Steffanie had to face the terrifying truth – Tom was dying.

“This one particular day, I took his hand and said…if you want to live, I need to know. If you could squeeze my hand, I will leave no stone unturned and I will try whatever I can to try to overcome this thing,” said Steffanie.

Tom, still in a coma, squeezed her hand. It was the sign she needed to continue fighting.

Steffanie started a desperate search to find something that could save Tom's life. During her research she came across phage therapy – a treatment she learned in school, when she was a student at the University of Toronto.

“The idea that there could be a perfect predator that would attack this superbug that Tom had was something that was really compelling," she said. “But unfortunately, with phage, you have to match the phage to the bacteria. It isn’t like any phage will attack any bacteria. It has to be like a lock and key.”

She started contacting labs around the world, asking for help to find phages that could kill acinetobacter baumannii – Tom’s superbug.

"I wrote these researchers – it was like cold emails, they were total strangers...There was some (phages) that were directly sourced from ... barnyards," she said.

In the end the phages came from three sources: The U.S. Navy, a San Diego based biotech company and Texas A&M University, which found phage in purified sewage.

On March 15, 2016, the doctors injected billions of phages into Tom's abdomen and bloodstream. Five days later, he woke up.

"Literally he was off life support within two weeks,” said Steffanie. "My favourite line is: you know that my husband was cured with phage therapy, he is full of shit.”

“I am a fairly skeptical, cynical person,” said Dr. Schooley. “But I was elated to see it. I thought this could be something big.”

Soon Steffanie and Tom were fielding calls from desperate patients, looking for their own ‘miraculous cure’.

The couple knew they had a possible key to solving the superbug crisis and a responsibility to share their knowledge with the rest of the world.

“Antibiotic resistance is the coming plague.” “And this is a potential solution and we shouldn’t be afraid of alternative medicine,” said Tom.

So a year ago Steffanie and Tom launched IPATH – the Center for Innovative Phage Applications and Therapeutics at the UC San Diego School of Medicine – the first phage therapy centre in North America, connecting doctors and patients suffering from treatment resistant infections, with scientists collecting phage. The group has already treated eight people and is consulting on many international cases. 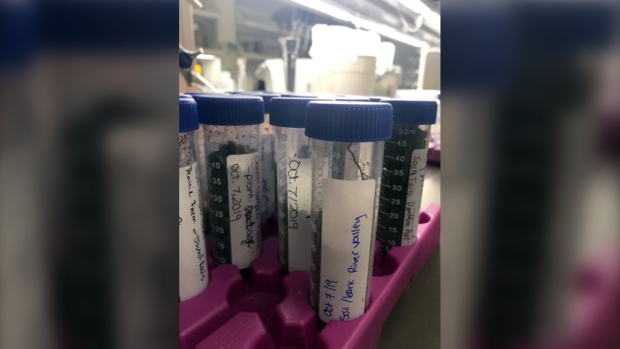 Canadian microbiologist Jon Dennis is part of this new scientific network. He and his students hunt for phages on farms and forests for his growing collection at the University of Alberta.

“We’re constantly looking for new phages…when we get an (sample) from a patient we go through our library of phages and see if we have one that matches,” he said. “This really is personalized medicine. This is a prime example of how this one medicine for one patient is going to save lives.”

His specialty is finding phages for superbugs that afflict CF patients. It’s often a race against time. By the time patients find him they are quite ill and have exhausted all options.

Still, he has managed to extended the lives of people in the United States. But he’s frustrated he hasn't been able to help anyone here.

Phage therapy is considered a drug and Health Canada has not authorized its use.

"I would like to see that -- something discovered in Canada being used to treat Canadians," he said. “In Canada we are still struggling to get past regulatory hurdles."

And some physicians are still skeptical that phages actually work.

“There was a lot of work done in the last century that sort of made it seem like it was not the best approach to treatment,” said Chan. “So I think a lot of physicians that were trained way back in the day, just still have that in their head and they are not open to considering the possibilities and that’s not right.”

Experts stress phage has several benefits that go beyond their superbug killing skills.

Researchers are also using phages to prevent infections in farm animals and to stop e-coli and salmonella from growing in food.

Another advantage – phage therapy is cheap, according to Chan's calculations, costing about a dollar a dose.

But along with the promise are unanswered questions, scientists still don’t always know the correct dose or how to find the right phage for every infection. That’s why Steffanie and Tom are calling for more studies.

"It needs to be evaluated to see whether or not it could be licensed alongside antibiotics. It needs its fair shake, and it hasn’t gotten it yet."

To spread the word, the couple have turned their story into a best-selling book: "The Perfect Predator: A Scientist’s Race to Save Her Husband From a Deadly Superbug.”

It will also become a Hollywood film, ensuring this Canadian discovery – and its life-saving potential – is never forgotten again.

“This is a Canadian solution discovered a hundred years ago, Canadians at the forefront. ... We need to be bold," said Steffanie. "We need to take risks and if we hadn’t been bold in my husband's case he would be dead.”