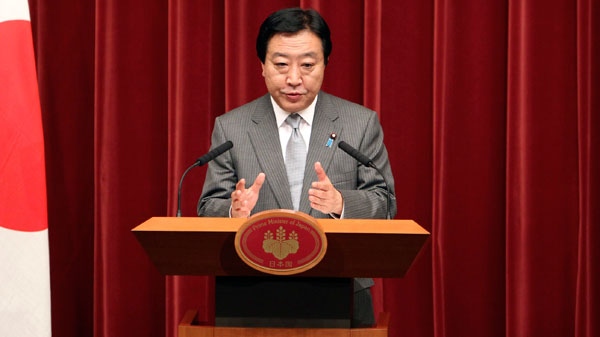 TOKYO - Public support for Japan's prime minister and his cabinet has fallen 2.5 percentage points over the last month, as the administration's numbers continue to decline, a poll released Sunday shows.

Public approval for Prime Minister Yoshihiko Noda and his cabinet stood at 44.6 per cent in the Kyodo News agency poll. The administration's disapproval rating rose 6 points, to 40.3 per cent.

Support for Noda has steadily declined since he took office in early September.

New prime ministers in Japan typically begin with relatively robust approval ratings, only to see them drop steadily after a brief honeymoon period. Noda is Japan's sixth prime minister in five years and faces a public frustrated with disaster reconstruction efforts and a lacklustre economy.

Ichikawa is under fire for remarks made by his ministry's top official in Okinawa, where plans to relocate a U.S. Marine air base face strong opposition. The official, who has been dismissed, reportedly likened the move to rape, implying that the government would force its way onto the island.

The resulting outcry further intensified after Ichikawa told parliament that he was unfamiliar with details about the 1995 rape of an Okinawan schoolgirl by three U.S. servicemen. The incident fueled anti-American sentiment and concerns over U.S. military presence.

Among other topics, respondents in the poll expressed wariness over the government's plans to raise the 5 per cent consumption tax. More than half of those surveyed said they wanted a general election before a hike is enacted.

More than 71 per cent said they wanted a realignment of political parties. The high figure suggests voters are unhappy with the status quo of two big political parties and several minor parties.

Kyodo randomly surveyed 1,021 eligible voters by telephone over the weekend. A poll of that size would typically have a margin of error of 5 percentage points.

The sample did not include areas in northeastern Fukushima prefecture that were evacuated because of the nuclear crisis spawned by the massive earthquake and tsunami last March.