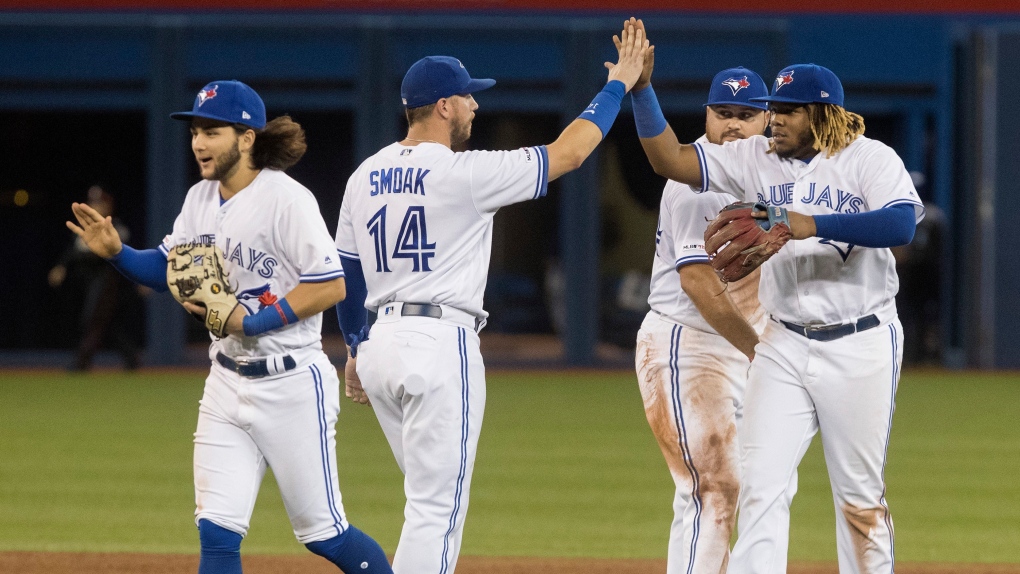 TORONTO -- One shaky inning was all the Blue Jays needed to get past Canadian Cy Young candidate Mike Soroka.

And while they made it look fairly easy -- tagging Soroka with three straight base hits in the first inning en route to a 3-1 win over the Atlanta Braves -- the Blue Jays caught a glimpse Tuesday night of what's made the 22-year-old right-hander so difficult on his opponents this season.

"He's got good movement on his pitches. That's the first thing (Bo) Bichette said when he came (into the dugout) after his first at bat," Blue Jays manager Charlie Montoyo said.

"He moves a lot and he throws strikes. He's pretty good, that's why his numbers are so good."

Vladimir Guerrero Jr. singled in the first run off the Calgary native after base hits from Bichette and Cavan Biggio opened the inning, and Toronto (54-80) tacked on another run when veteran Justin Smoak drove in Biggio with a single later in the frame.

Smoak, who added a solo homer in the seventh off reliever Sean Newcombe -- his 20th of the season -- said it's been fun to watch Toronto's rookies succeed offensively.

"I mean, there's a reason why those guys are at the top of the lineup," Smoak said. "They're young but they're really good hitters, really good players and I think this organization is going to be fun to watch for a while here."

Guerrero had two hits, raising his batting average over his last 33 games to .366 (45 for 123) and strengthening his case for the AL Rookie of the Year title.

Soroka (10-3 with a 2.44 earned-run average), meanwhile, has been putting himself in contention on the National League side -- for both the Rookie of the Year and the Cy Young.

He allowed eight hits Tuesday along with the two runs, and struck out one batter to pick up his first road loss this season. He had come into the game with a 6-0 record and MLB-best 1.32 ERA in 13 road starts.

"I threw some pitches over the plate and they got hit," Soroka said of his outing. "If I locate my pitches better in the first we're out of that inning in a few pitches.

"Credit to them, they hit the ones I didn't locate."

Soroka made five starts for the Braves in 2018 -- including a forgettable one in Toronto last June when he allowed four runs over 4 2/3 innings -- but a shoulder injury kept him on the sidelines for the rest of that season.

Ozzie Albies drove in a late run for NL-East leading Atlanta (80-54) on a ground-rule double in the seventh. The Braves threatened from there with the bases loaded -- Toronto reliever Derek Law intentionally walked Freddie Freeman to get to former Blue Jay Josh Donaldson -- but Donaldson popped out to Bichette to end the frame.

"I thought he was going to hit a grand slam. It was the perfect setting," Freeman said.

Tuesday's game marked the return of Donaldson to Rogers Centre after the former star third baseman was traded from Toronto to Cleveland last September.

The Blue Jays honoured the 2015 AL MVP with a video tribute before the game. The crowd of 24,578 showered Donaldson with a standing ovation during the tribute and again before his first at bat, with Donaldson acknowledging the crowd by tipping his batting helmet.

"Today was a nice step in the right direction, I feel like, for me mentally, emotionally, being back here," said Donaldson, who went 0 for 4 on the night.

"It was nice to be able to go out there and play in front of the crowd again. This is one of the best places to play in all of baseball."

Wilmer Font opened the game for Toronto with two scoreless innings and Zack Godley (4-5) kept the Braves off the board for the next three frames. Atlanta's run was charged to Canadian reliever Jordan Romano.

Ken Giles pitched the top of the ninth for his 17th save.