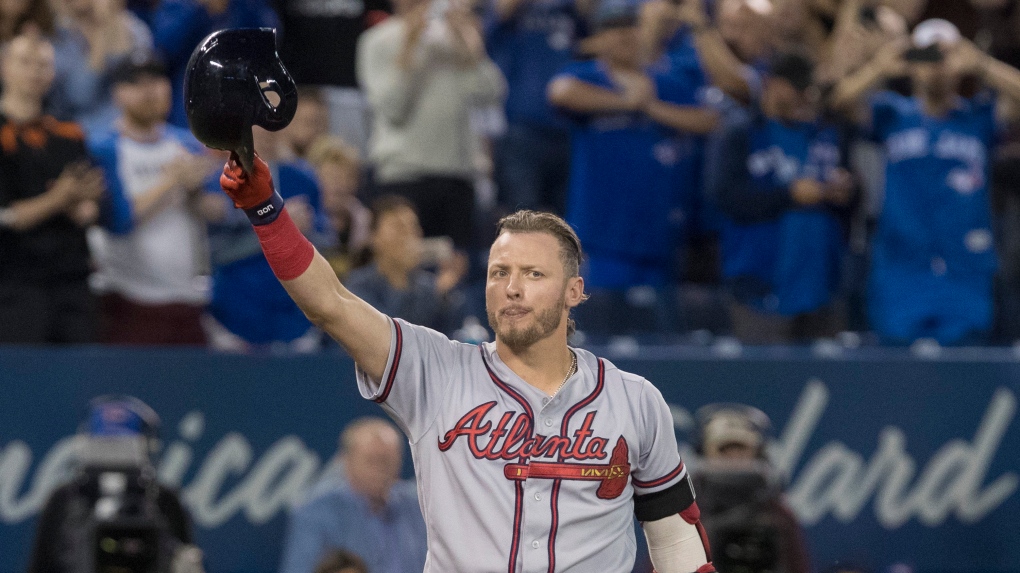 Atlanta Braves' Josh Donaldson acknowledges fans prior to the start of their Interleague MLB baseball game against the Blue Jays in Toronto Tuesday August 27, 2019. THE CANADIAN PRESS/Fred Thornhill

But nearly a year later, the 2015 AL MVP admitted he still has some regrets about how his tenure in Toronto ended.

The Blue Jays traded Donaldson to the Cleveland Indians on Sept. 1, 2018 after the star third baseman played just 36 games for Toronto due to injury that season.

Donaldson, who spent four years as a Blue Jay, returned to Toronto Tuesday with his new team -- the Atlanta Braves -- for the first time since being shipped off to Cleveland.

"I think what probably nags at me the most is just kinda how my career finished here in Toronto, not even able to play at the time, trying to fight as hard as I could to get back," Donaldson told a large group of reporters before Tuesday's game.

"It wasn't working out. And then how everything transpired was something that -- it's tough. At the end of the day you try to separate it as a business, but as a human being it can be tough. We do get frustrated and we do have other emotions that come about it.

"I'm very understanding of what's going on. Even though things didn't work out the way I necessarily wanted it to, I'm glad I was able to bounce back this year and I knew that I was capable of doing that."

The Blue Jays honoured Donaldson with a video tribute before Tuesday's first pitch, showcasing a montage of his big hits and defensive plays set to "In the Air Tonight" by Phil Collins -- the song he famously used as his walk-up music.

Donaldson, who was on the field doing his pre-game warmup when the video began, tipped his cap to the crowd as he was showered with a loud standing ovation.

"To see that, it's tough. It brings back memories, a lot of good times," Donaldson said after the game, a 3-1 win for the Blue Jays. "It's not something that you're used to seeing as an athlete and it's tough to prepare for. At the same time, it was nice to be a part of it."

Donaldson was 0 for 4 on the night.

But he had a chance to break open the game in the seventh inning with Atlanta down 2-1. Toronto reliever Derek Law intentionally walked Freddie Freeman to get to the former Jays slugger with the bases loaded, but he popped out on a breaking ball to end the inning.

"I thought he was going to hit a grand slam," Freeman said. "It was the perfect setting."

Donaldson had a monster first year with the Blue Jays, earning the 2015 AL MVP award -- the first Toronto player to win the honour since George Bell in 1987 -- after hitting .297 with 41 homers and 123 RBIs. He also had 41 doubles and a .568 slugging percentage to help Toronto end a 22-year playoff drought and reach the American League Championship Series before falling to the Kansas City Royals.

He shone again in 2016 as Toronto made its second straight appearance in the ALCS, but injuries soon took a toll on him over the next two seasons, and the then-pending free agent's trade value plummeted as he languished on the injured list through most of 2018.

With the Braves, however, Donaldson has been enjoying a renaissance season. He came into Tuesday's game batting .262 with a .910 on-base-plus slugging percentage and 32 home runs.

He attributes his bounce-back year to two major things -- a strict plant-based diet that he finds helps him deal with inflammation buildup, and his reunion with former Blue Jays head trainer George Poulis and assistant trainer Mike Frostad (now both on the Braves athletic staff), who worked with Donaldson in 2015 and 2016.

"And sometimes you have to learn through mistakes and I'm fortunate to have gotten through that and continue to go out here and now help the Atlanta Braves win."

With Atlanta sitting atop the NL East entering its two-game interleague series in Toronto this week, it looks as though Donaldson will be part of another strong World Series contender.

And while he's happy to be contributing to the Braves' playoff drive now, he still thinks about that 2015 run with the Blue Jays and what it did to the city of Toronto.

"That was one of the most special years I've been a part of," Donaldson said. "The city was on fire, it was electric. To be able to be a part of that is special and it's (something) you won't ever forget."

Thank you for bringing the rain, JD!