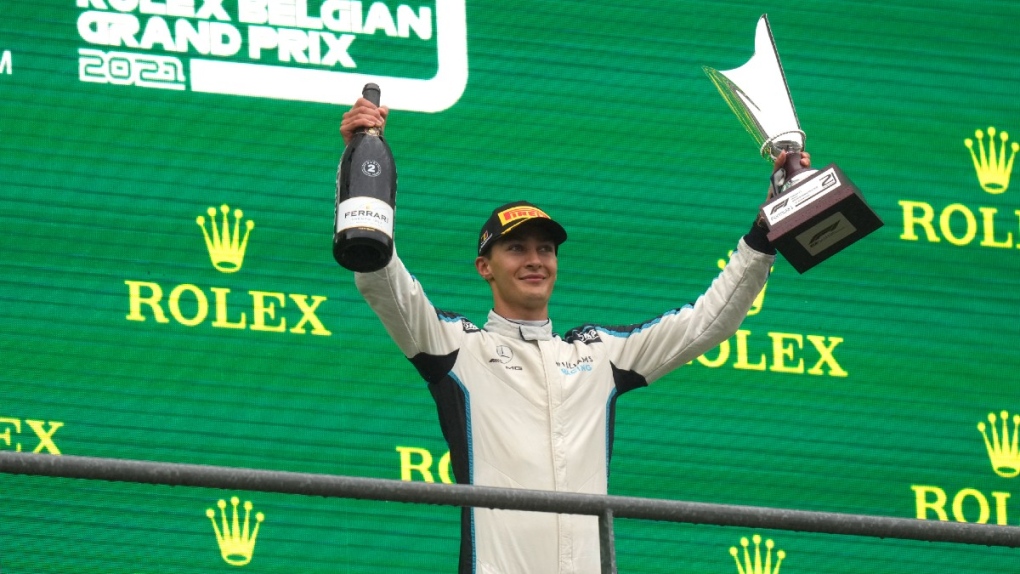 Williams driver George Russell holds his trophy on the podium after the Formula One Grand Prix at the Spa-Francorchamps racetrack in Spa, Belgium, on Aug. 29, 2021. (Francisco Seco / AP)

George Russell was confirmed as Lewis Hamilton's Formula One teammate from 2022 by Mercedes on Tuesday.

The all-British lineup was speculated on for months, and signalled on Monday by Valtteri Bottas' move from Mercedes to Alfa Romeo next year.

"But I'm under no illusions as to the scale of the challenge; it's going to be a steep learning curve. Valtteri has set a high bar, consistently delivering week in and week out, scoring wins, pole positions and helping win multiple championship titles."

"He has been a winner in every racing category -- and the past three seasons with Williams have given us a taste of what the future could hold for him in F1," Wolff said in a statement.

Russell received a long-term contract but Mercedes did not elaborate.

Russell is a Mercedes protege after joining the team's young driver programme in 2017. That year he won the GP3 series, and the next year the Formula Two championship.

He drove once for Mercedes, last December, when he replaced a virus-affected Hamilton at the Sakhir Grand Prix. Russell was leading until a pit stop error by the tire crew after 63 laps.

"It is our challenge together to help him continue learning within our environment and alongside Lewis, the greatest F1 driver of all time," Wolff said. "I am confident that as their relationship grows, they will form a strong team and deliver for Mercedes on and off the track."

Since 2019 he has been at Williams, where he's excelled in a much slower car, notably at the recent Belgian GP where he qualified second and finished second.

He said he's keen to make the last nine races of this season, starting with the Italian GP this weekend, his best for Williams.

"I've loved every moment in what I'd describe as a true heart and soul racing team," Russell said, "and I'll be pushing harder than ever to make sure we end our story in the best possible way."