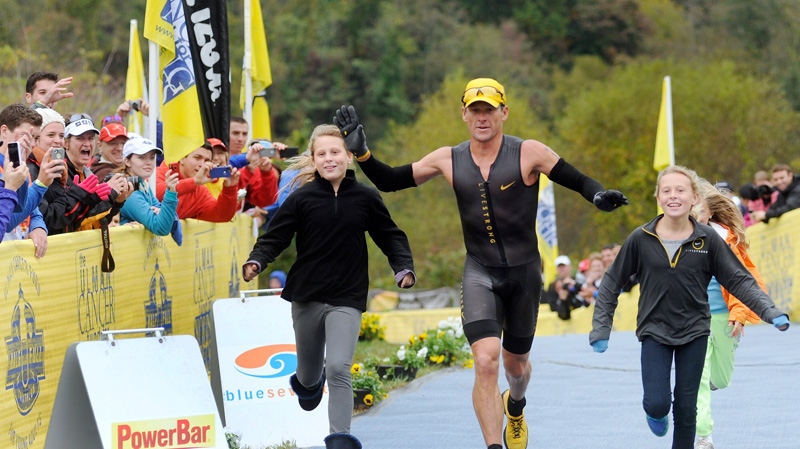 ELLICOTT CITY, Md. -- Lance Armstrong competed in a triathlon Sunday after organizers dropped USA Triathlon sanctioning so he could take part in a race that raises money for cancer.

Armstrong is banned from events that follow World Anti-Doping Agency rules after he chose not to fight USADA charges of doping.

Armstrong finished the 70-mile swim, bike and run in 4 hours, 16 minutes at the Revolution3 Half-Full Triathlon, racing in a wave of about 50 fellow cancer survivors.

"This was a race that was built and designed to race money for cancer. So it was an easy decision," said Brock Yetso, president of the Ulman Cancer Fund for Young Adults. "We had two individuals who decided they did not want to race based on our decision and 300 who said they wanted to. So I think numbers speak for themselves."

"He's led this organization to where it is today," Armstrong said at the finish line of Ulman's impact on Livestrong.

The U.S. Anti-Doping Agency stripped Armstrong of his seven Tour de France titles in August for allegedly using performance-enhancing drugs. He denies the charges but chose not to continue fighting them.

Sunday's race results will not count toward national rankings. College competitors are still able to use the race as a national qualifier event.

An estimated $100,000 in proceeds from the event will benefit the Ulman Cancer Fund, Yetso said. A speaking event with Armstrong on Saturday night raised another $30,000 from ticket sales and a live auction.

"I think he's a great inspiration for anybody," said Lennie Phillips of Kensington, Md., who survived brain cancer and competed in the special wave alongside Armstrong. "All of these allegations, whether they're true or not, I don't know, but he still had to go through all the treatments."