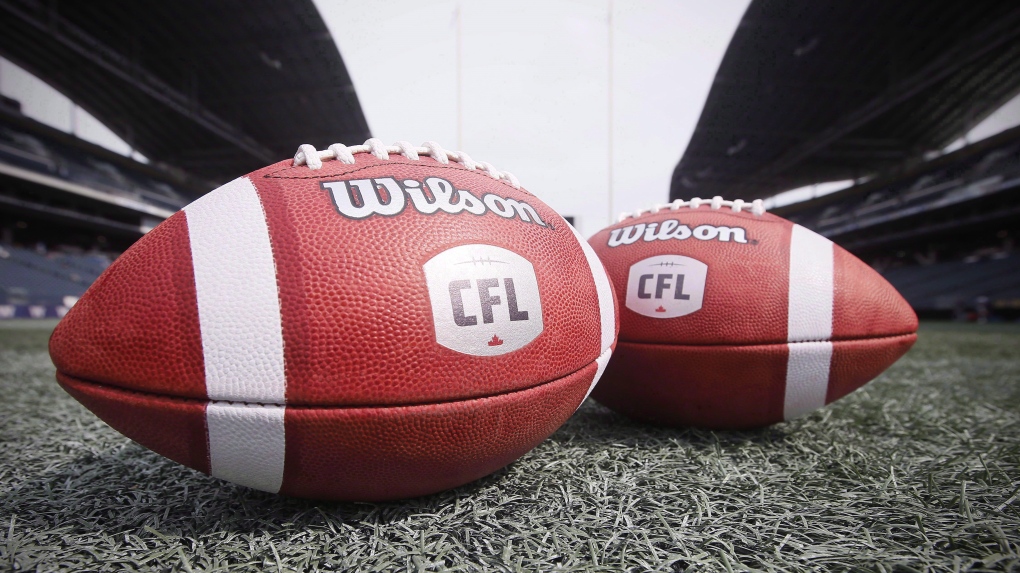 CFL balls are photographed at the Winnipeg Blue Bombers stadium in Winnipeg Thursday, May 24, 2018. (THE CANADIAN PRESS/John Woods)

The CFL faces more challenges in its planned return for 2021 than it did last year when it was forced to cancel its season due to the COVID-19 pandemic.

The CFL and CFL Players' Association continue working on their return-to-play protocols. A league source estimates the final paperwork will be ready for submission in a week or two.

The source spoke on the condition of anonymity as the CFL hasn't divulged details of its newest return-to-play plan.

The CFL has released a '21 schedule with the expectation of training camps opening in May. The first exhibition game is slated for May 23.

A full 18-game regular season for all nine teams would kick off June 10 and culminate Nov. 24 with the Grey Cup game at Hamilton's Tim Hortons Field.

If the season began on time, the expectation is it would do so without fans in the stands. That wouldn't be good news for the nine franchises, which are heavily dependent upon ticket sales to generate revenue.

What's more, the CFL reportedly lost between $60-to-$80 million by not operating in 2020. It pulled the plug on plans for an abbreviated season in Winnipeg, its tentative hub city, last August after failing to secure a $30-million, interest-free loan from Ottawa that was deemed essential in order for football to be played.

It meant the Grey Cup was not awarded for the first time since 1919.

The CFL had established health-and-safety protocols last year, presenting them to the Public Health Agency of Canada for evaluation. Dr. Howard Njoo, Canada's deputy chief public health officer, praised the league's plan but it was never formally approved, a step that was crucial in securing the loan from Ottawa.

CFL commissioner Randy Ambrosie said last week the '20 protocols were being amended and tweaked for another presentation to Canadian health officials. But this time around, the league is looking at all of its teams playing games in their respective stadiums instead of just in Manitoba.

So the amended protocols must be approved by the six provinces where franchises are based -- B.C., Alberta, Saskatchewan, Manitoba, Ontario and Quebec -- before going back to the PHAC.

And once that's done, the CFL would then have to secure a national interest exemption from the federal cabinet for games to be played before the completion of Canada's COVID-19 vaccination program. Ottawa has suggested that all vaccines could be delivered by late September.

Ambrosie said earlier this month the league is committed to staging a 2021 season.

"We've got a schedule in place and we're committed to it," Ambrosie said. "Our real focus is on all the planning that's going to have to go into executing against that and also having maximum adaptability because there's no doubt we're going to have to make adjustments to our plan.

"We just need to be ready at a moment's notice to make those adjustments . . . that's really how we're planning our business. We're committed to being on the field in 2021 . . . we're just keeping all of our avenues open."

But the projected timelines would appear to make it tough for the CFL start its season on time. However, the NHL managed to get its return-to-to play policies approved in Canada in time for the start of its current campaign, one that sees the league's seven Canadian-based franchises playing each other exclusively in a separate division.

It's a similar model to what the CFL proposed last year, having all nine teams in a single division rather than the traditional East-West format. The league and CFLPA are looking at what parts of the NHL's current policy might be applicable in their health-and-safety protocols in 2021.

This season, the NHL has continually tweaked its protocols. As of Tuesday, only eight players were on the COVID list compared to a season-high 59 on Feb. 12.

But even if the CFL gets its protocols approved in time, it remains a major challenge to stage games in empty stadiums, given the staggering losses the league and its franchises suffered last year -- the CFL's television deal with TSN is not worth nearly as much as other big North American leagues.

A more plausible scenario would be football resuming later when fans could be in the stands.

And even then, the expectation is the CFL will again have to make a pitch for more government assistance to get going. Another source said the league was projected to receive more than $10 million in wage subsidy from Ottawa between March and December 2020.

That figure would've gone past $15 million had an abbreviated season been played. And it's unclear what subsidies the league has received, if any, so far in 2021.

This report by The Canadian Press was first published Feb. 24, 2021