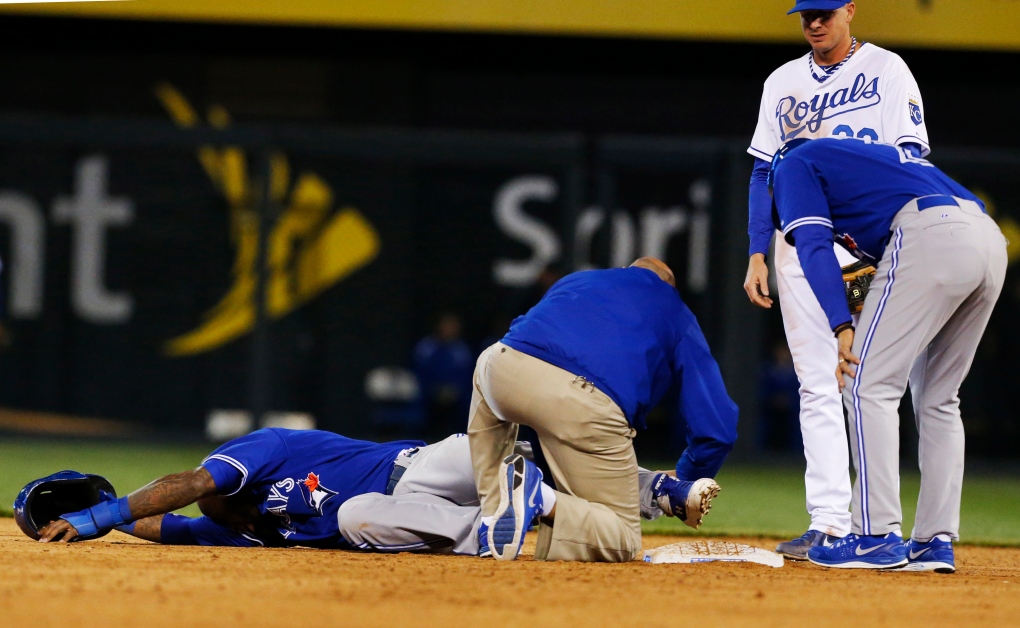 A trainer works on Toronto Blue Jays' Jose Reyes after he injured his leg while stealing second base during the sixth inning of a baseball game against the Kansas City Royals at Kauffman Stadium in Kansas City, Mo., Friday, April 12, 2013. B(AP Photo/Orlin Wagner)

TORONTO -- The Toronto Blue Jays have placed star shortstop Jose Reyes on the 15-day disabled list due to a sprained ankle and selected the contract of shortstop Munenori Kawasaki from triple-A Buffalo.

The moves were announced on the team's Twitter feed on Saturday afternoon.

Reyes suffered a gruesome ankle injury after an awkward slide into second base in the Blue Jays' 8-4 win over Kansas City on Friday night. The results of an MRI exam were not immediately released but the 29-year-old speedster is expected to be out for several weeks.

"Thank you everyone for all the good wishes," Reyes tweeted Saturday. "Don't worry, I will be back on the field soon!"

The four-time all-star had to be driven off the field on a cart after the injury in the sixth inning.

Reyes was acquired in the Blue Jays' off-season megatrade with the Miami Marlins. He was off to an excellent start this season with a .395 average, one homer, five RBIs and five stolen bases in 10 games.

The Blue Jays were scheduled to play at Kansas City on Saturday night.