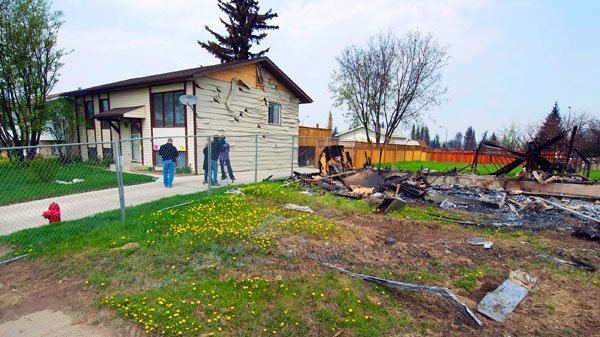 Soil in the northern Alberta town of Slave Lake is being tested for toxins after a wildfire destroyed many of the community's homes and businesses.

It's the first time Alberta has tested for contaminants, including heavy metals and dangerous hydrocarbon residues, in the ash and rubble left behind by a forest fire.

PAHs are polycyclic aromatic hydrocarbons, residues left by burning plastics that are considered potentially carcinogenic. Heavy metals can attack the nervous system as well as the lungs, kidneys and liver. Dioxins and furans can combine the effects of both.

Slave Lake was badly scarred by a wildfire that forced almost all of the town's 7,000 residents to flee in mid-May. More than 400 homes and business were destroyed by the fire, which also incinerated hundreds of vehicles and reduced several neighbourhoods to a blackened wasteland.

Potter said testing will come in two phases. The first will consist of a preliminary assessment "to see if further work needs to be done."

Studies from California, where wildfires in 2007 destroyed more than 2,000 homes in two counties alone, suggest the environmental legacy of such blazes presents a significant health hazard.

One study from the U.S. Geological Survey found concentrations of arsenic, lead and antimony approached or exceeded residential soil remediation guidelines. It also found the remaining ash was alkaline enough to be caustic.

"The destruction left in the wake of these fires has the potential to result in widespread public exposure to toxic materials," said the report by Geosyntec Consultants.

Geosyntec also found high concentrations of heavy metals and PAHs after the fires. It also suggested hazardous material in the residue threatened surface and ground water from rain runoff.

"There are public health threats if this debris is not removed," said Shelley DuTeaux of the protection agency's air resources board.

"We've had horrible public water contamination issues following wildfires. It's all because the debris stays there and then the next time it rains or snows this stuff just goes in the watershed."

California also has an elaborate system in place to safely remove debris from fires. A public health emergency is declared and large pieces of debris, including chunks of metal and cars, are removed by workers in protective suits. Ash from the fire is dug up and hauled away after being wetted down to prevent it from blowing around.

"The minute you start digging in this stuff you pose a respiratory health hazard either for the workers or the surrounding community," said DuTeaux.

Workers, again wearing protective gear, remove ash and debris down to the bare soil, which is then tested before the property is cleared for rebuilding.

"There has to be a sign-off from some official saying the property is now safe for habitation," DuTeaux said.

Until the property is cleared, residents wearing Red-Cross-donated suits and respirators are only allowed back for an hour to search the wreckage for family memorabilia. It's just too dangerous to allow people to look after the cleanup themselves, said DuTeaux.

"You see people out in flip-flops and shorts shovelling this stuff. They're not doing anything to protect themselves so they're putting themselves and they're family at risk."

Alberta Health spokesman Kerry Williamson said the province will wait until it gets test results before deciding if special precautions are needed.

"If any of those tests come back and identify some risks to human health, then we would step in," he said. "It would depend on what they find."

Gerry Predy, Alberta's senior medical health officer, said most of the burned residential properties have been fenced off.

"We have to be careful that people don't expose themselves to things that may have happened as a result of the fire."

Guidelines on how to safely clean up burned-out properties are almost ready for release, he added.

The results of the soil testing will be released publicly, Potter said.

"This is setting a precedent. We haven't had a sizeable town burn down like this before."

No soil testing was done after fires in 2003 burned down more than 200 homes in Kelowna, B.C.