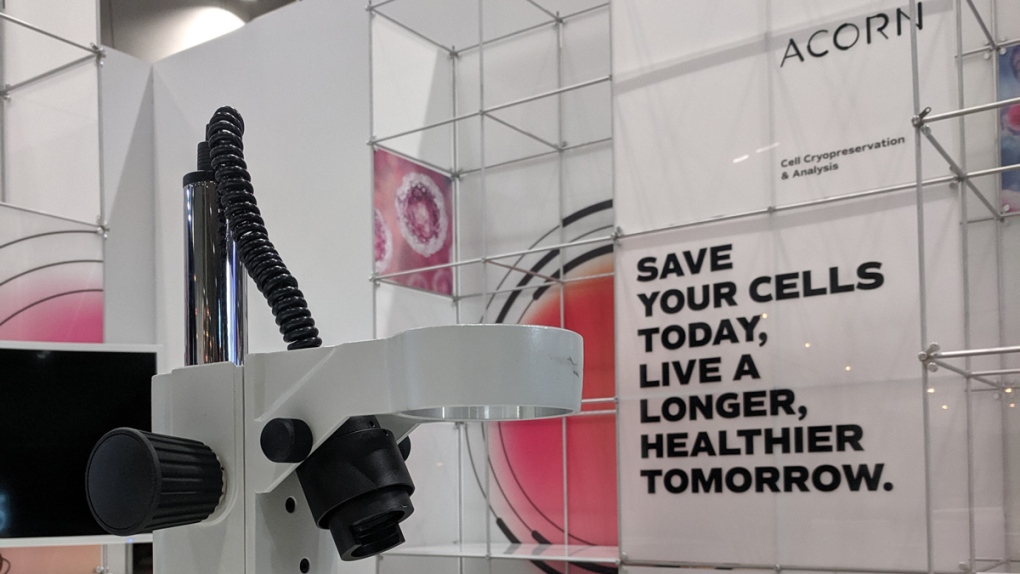 A Canadian healthcare company is betting on the future of regenerative medicine by offering consumers an accessible and more cost-effective way of collecting and storing their cells for future medical therapies.

Toronto-based Acorn Biolabs has developed a non-invasive method of preserving the genetic material found in the cells of human hair follicles.

By simply plucking a few hairs from your head, extracting and analyzing the cells, and storing them at cryogenic temperatures, the company says it can provide “biological life insurance” in the form of healthy, preserved cells that can be later transformed into stem cells to treat disease — providing that advancements in genetic therapy have been made by the time you are diagnosed.

"Cell therapy is rapidly emerging as the future of healthcare," Drew Taylor, co-founder and CEO of Acorn Biolabs, told CTVNews.ca.

“We need to work on banking our cells in advance so that when we are sick we have a source of cells that will drive the success of all of these potential therapies.”

Regenerative medicine is widely seen as the next big step healthcare innovation. In 2012, scientists from Britain and Japan were awarded a Nobel Prize after discovering that adult cells could be transformed into embryo-like stem cells that could regrow tissue in damaged organs.

Today, researchers are examining how genetic and stem cell therapies could be used to treat and even prevent diseases like ALS, Parkinson’s, Alzheimer’s, arthritis, and cancer.

“We’re moving into a world of preventative medicine,” Taylor explained. “One day, what we will be able to do is talk to your cells, edit out the genes that cause Parkinson’s, for example, so you can move forward without those genes present.”

The catch is — like us — our cells age over time; and older cells aren’t as helpful when it comes to these types of advancements. Which is why the company hopes to inspire people to harvest their cells now, even before treatments are widely available.

“[These therapies] are only going to be as powerful as the cells you have to work with. If you bank your cells today you will have younger, healthier cells to use in the future,” said Taylor.

“The shame of it would be if you got to a point in your life where you are sick and your cells are degrading, and there is a potential treatment for something like Parkinson’s. You have the potential to treat it, but your cells are no longer viable.”

Acorn Biolabs’ idea of preventative medicine is already garnering interest from the tech community as it presents its service at Toronto’s Collision tech conference this week.

The company, who is offering discounted pricing to conference-goers, had already taken samples from several interested consumers during the first day of the highly-anticipated event.

The ethics (and cost) of genetic therapy

But the idea of gene therapy and editing come with a slew of ethical concerns, particularly the possibility that it could be used to make permanent changes to human genes that would be passed on to future generations, or to create so-called designer babies.

In Canada, the genetic modification of reproductive cells is punishable by up to 10 years in prison under the Assisted Human Reproduction Act of 2004.

The law makes it illegal for researchers to alter the human genome in any way that could be inherited. Though it does not affect medical research in regards to gene editing for treating disease, Taylor says the medical community is right to proceed with caution.

“I think we have to be very careful about changes to cells and manipulation,” he said, noting that although we know the potential of stem cell manipulation, we must make sure we develop safe and ethical methods of doing so.

“Unfortunately, policy does need to time to catch up to innovation, but Canada is the place to do that.”

According to Taylor, cell banking has been around since the 1960s, but the costs have always been incredibly high for the average consumer, ranging from roughly $2,000 to $3,000. Parents who choose to privately store their infant’s umbilical cord blood and stem cells also pay between $1,000 and $2,000 in upfront costs, plus a monthly storage fee.

Acorn Biolabs charges $299 for the upfront analysis of your cells and $15.99 per month to store them cryogenically.

“Healthcare systems aren’t thinking about your health that far in the future. That’s one of the reasons we wanted to make it as low cost as possible so there are no barriers,” Taylor explained.

“It goes into our Canadian mentality about healthcare, really—accessibility. We think this is something that could save your life one day.”

The company soon plans to offer whole genome sequencing, genetic analysis, and a personal health report with their services.