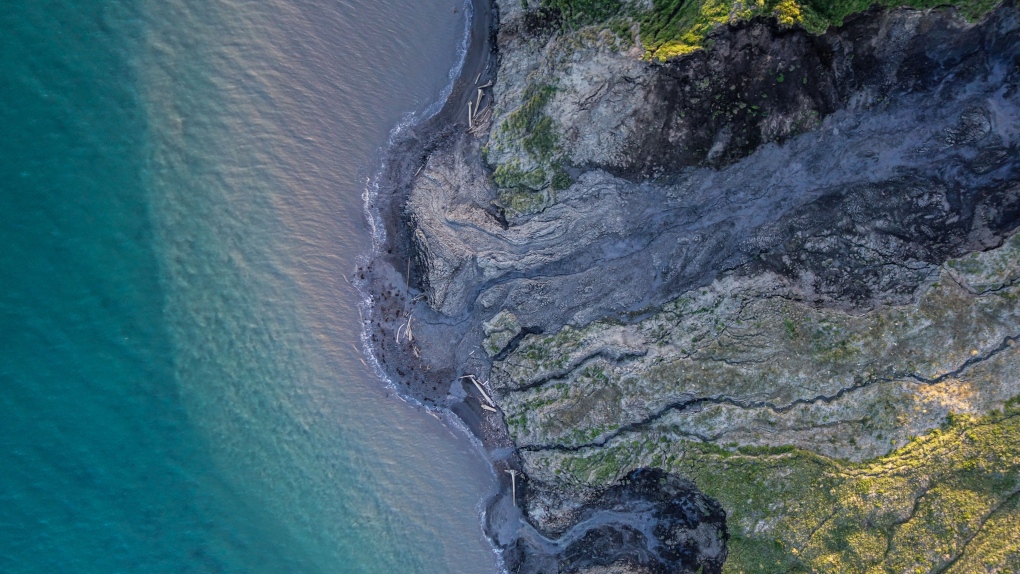 Researchers found the permafrost coastline of a Canadian Arctic island was collapsing at a rate of up to a metre a day. (Photo: Jeffrey Kerby)

The frozen coastline of a Canadian Arctic island is eroding at up to a metre a day as a warming climate leads to longer summers, new research has found.

Researchers say the rate of collapse they found is six times faster than the average for the previous 65 years.

“Big chunks of land were breaking away and waves were eating them away,” said the study’s co-author Isla Myers-Smith, a geoscientist at the University of Edinburgh. “They were often gone by the next day.”

Myers-Smith was part of an international team that flew drone-mounted cameras to survey the tundra coast of Herschel Island, also known as Qikiqtaruk, off the Yukon coast in the Canadian Arctic. It is an unoccupied but historically significant island of about 116 square kilometres.

The researchers determined that summer storms are sweeping away coastal permafrost at a higher rate because it is being exposed for longer periods. Sea ice melts earlier and re-forms around the island later than it used to due to climate change, the researchers explain in their article published in the journal The Cryosphere.

Researchers mapped the area seven times over 40 days in the summer of 2017 and built computer models based on drone photos. They showed that the coast had retreated by an astounding 14.5 metres during the period, sometimes as much as a metre a day.

Researchers also compared the results with surveys taken between 1952 and 2011 that showed the 2017 rate of erosion was more than six times the historical average for the area.

The research team included university researchers, government scientists, and local park rangers from England, Germany, Netherlands, the United States and Canada, along with community members who live and work in the Arctic.

A Vancouver native, Myers-Smith has been travelling to Herschel Island-Qikiqtaruk to study plants since 2008 and has spent every summer there since 2013. She leaves again for the island in a few weeks.

The research team - dubbed Team Shrub - was studying changes in vegetation in 2017 when it witnessed big shifts in the coastline that it hadn’t seen in previous years, she told CTVNews.ca.

While coastal erosion is natural and inevitable, it’s important to document the rate, she says. Similar acceleration has been found along the Alaska coast.

“As the Arctic continues to warm faster than the rest of our planet, we need to learn more about how these landscapes are changing,” said study lead Andrew Cunliffe, a geography researcher at the University of Exeter.

“Using drones could help researchers and local communities improve monitoring and prediction of future changes in the region.”

Herschel Island-Qikiqtaruk is uniquely suited to study because there has been a history of ecological documentation and it is located above the treeline but south of the extreme Arctic.

The island’s Pauline Cove was at one time a significant settlement for Indigenous people and later served as a community for European and American whalers starting in the late 1800s. It was also an outpost for the Hudson’s Bay Company between 1915 and 1937. The island continues to be used by the Inuvialuit for hunting and fishing but the last permanent, year-round residents left in 1987.

A dozen structures survive on the island, including Indigenous sod homes and whaling buildings, which continue to be threatened by coastal erosion. It’s also home to a territorial park.