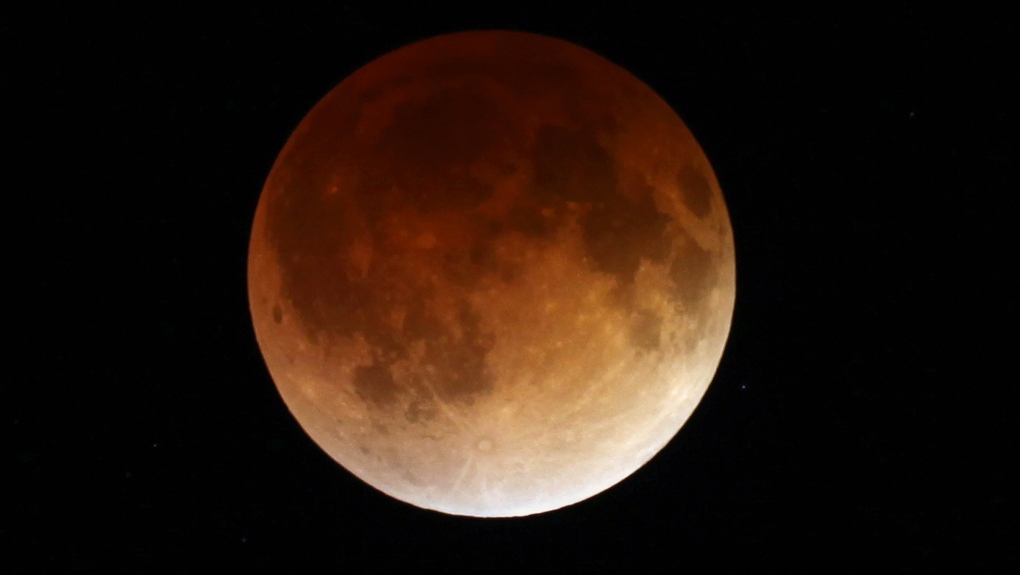 TORONTO -- Sky gazers will be treated to a rare glimpse of a total lunar eclipse at the end of the month.

A lunar eclipse happens only once every couple years and will be visible on May 26, making it the first total eclipse since January 2019.

The eclipse occurs when the moon is closest to Earth on its orbit, making it appear seven per cent larger than its average size, according to NASA’s visualization studio.

“The total phase will be visible near moonset in the western United States and Canada, all of Mexico, most of Central America and Ecuador, western Peru, and southern Chile and Argentina,” according to NASA.

The space agency says that the moon will be at its fullest just after moonrise along the Asian Pacific Rim. If skies are clear, the lunar eclipse can be seen in its entirety in eastern Australia, New Zealand, and the Pacific Islands, including Hawaii.

The unique eclipse is a result of the combination of a total lunar eclipse and a full supermoon. When the two events occur simultaneously the moon projects a reddish, copper hue, known as a “super blood moon,” seen by many parts of the world.

To see the eclipse in its full extent, sky watchers will have to have a clear view towards the western horizon. Over several hours, the moon will pass through the deepest part of the Earth's shadow, which will cause the moon to darken and potentially turn red.

The “super blood moon” gets its nickname by not only the warm colour it projects, but also because of its apparent size and range to Earth.

The colour is caused by sunlight filtering through Earth's atmosphere – a range of hues created by sunrises and sunsets happening around the planet at that specific time.

Although the full eclipse will be below the horizon for people living in eastern time zones, spectators will still be able to catch a glimpse of a partial eclipse in the early hours of the morning.

The full eclipse will be best viewed for those living in western Canada.

Two weeks later on June 10, a solar eclipse is expected to be visible across parts of Canada. Lunar eclipses, unlike solar eclipses, are entirely safe to look at with the naked eye.

This story has been corrected to remove a reference that the Earth's temperature affects lunar eclipses.