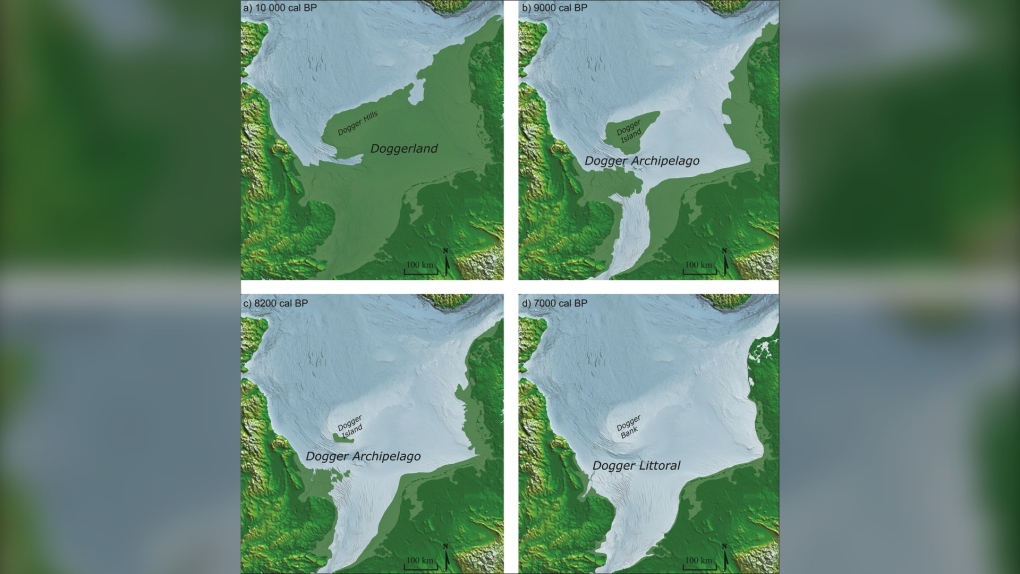 TORONTO -- A new study suggests that parts of Doggerland, the land that once connected Britain with continental Europe, survived the devastation of a tsunami that struck the coast of the North Sea more than 8,000 years ago.

While it was previously thought that Doggerland was flooded from the massive Storegga tsunami, an new analysis of topography and sediments by a group of researchers from the United Kingdom and Estonia has found that an archipelago survived the natural disaster.

Researchers say the surviving islands may have played a key part in prehistory by providing a staging point for the spread of farming into the rest of Britain.

While another gigantic submarine landslide is unlikely anytime soon, researchers say their findings are vital in helping risk modellers prepare for future tsunamis and their impacts on surrounding regions.

Doggerland, which was already partially flooded by rising sea levels after the last ice age, was struck by the Storegga tsunami approximately 8,150 years ago, according to the study.

The study reports that the Storrega tsunami was triggered by a massive underwater landslide off Norway's continental shelf. Researchers say the large tsunami may have caused several other tsunamis that struck the coastline of the North Sea basin.

The resulting waves were of a catastrophic scale the region has not seen since, with researchers finding evidence of tsunami sediment, stones and broken shells over 40 kilometres from the shoreline at the time, suggesting the tsunami reached far inland.

The tsunami likely had a devastating impact on the human population, potentially killing thousands, as well as a lasting effect on the now completely submerged landscape of the southern North Sea.

While the tsunami would have drastically impacted Doggerland, researchers suggest the first wave would have been concentrated in valleys with dense forests and hills, providing protection to other parts of the region.

"Whilst some of the region may have been permanently flooded, a significant area would have remained habitable for centuries to come," the study noted.

Researchers noted that the uplands, which would later become a sandbank known as Dogger bank in the late 19th and 20th century, may have also dissipated some of the wave's energy. This helped a smaller archipelago of Doggerland survive for a millennia until it was finally submerged by rising sea levels.

The analysis suggests these last parts of Doggerland may still have existed at the time farmers migrated from continental Europe and began to introduce agriculture to Britain.

Given its remaining landscape, researchers say the surviving islands likely appealed to hunter-gatherers living in northwest Europe after the last ice age, providing various opportunities for hunting and foraging.

The study reports that the remaining portion of Doggerland may have been a "staging ground" for early farmers, an isolated region they never reached and hunter-gatherers flourished, or a "unique mixing pot" between the two groups.

However, researchers warn the opportunity to continue studying what was Doggerland is "closing fast."

There are proposals for massive oil and natural gas developments in the North Sea, which could jeopardize future research, according to the study.