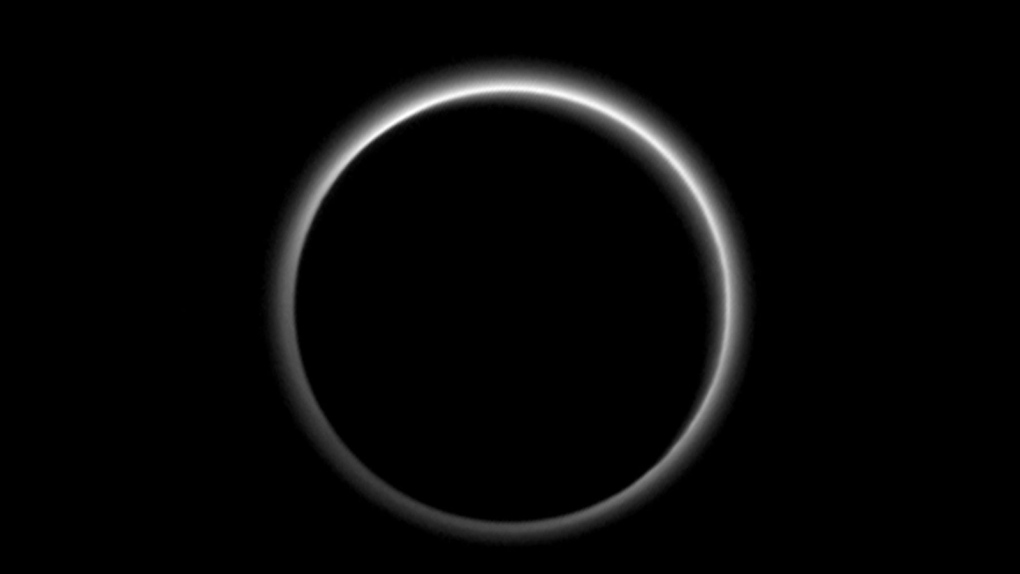 This July 15, 2015 image made available by NASA on Friday, July 24, 2015 shows the atmosphere of Pluto backlit by the sun when the New Horizons spacecraft was about 2 million kilometres away. (NASA / JHUAPL / SwRI via AP)

NASA has released new images of Pluto, including a photo that suggests evidence of exotic ice flows across the dwarf planet's surface.

The photos, released Friday, are the latest from the New Horizons spacecraft, which made its closest approach to Pluto on July 14.

According to NASA, the photo reveals details from the region that lies within the western half of Pluto's heart-shaped portion – dubbed "Sputnik Planum." The swirl-shaped patterns of light and dark in the region suggest that a layer of exotic ice has flowed over the surface.

"There, a sheet of ice clearly appears to have flowed – and may still be flowing in a manner similar to glaciers on Earth," NASA said.

Scientists enhanced another image of the dwarf planet with colour, to help detect differences in composition and texture of Pluto's surface.

The multi-coloured photo shows a "surprising portrait" of Pluto, revealing a pattern of different zones that vary by latitude, NASA said. 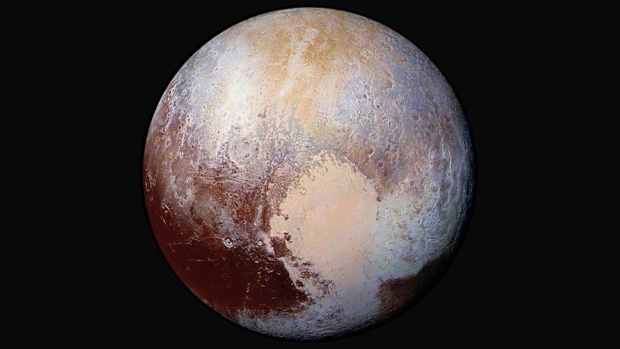 "The darkest terrains appear at the equator, mid-tones are the norm at mid-latitudes, and a brighter icy expanse dominates the north polar region," the space agency said.

NASA said that the New Horizons team is interpreting the pattern to be the result of seasonal movement of ices from the equator to the poles.

A third photo, also released Friday, shows a stunning view of Pluto's atmosphere, backlit by the sun, and taken seven hours after the spacecraft made it closest approach. 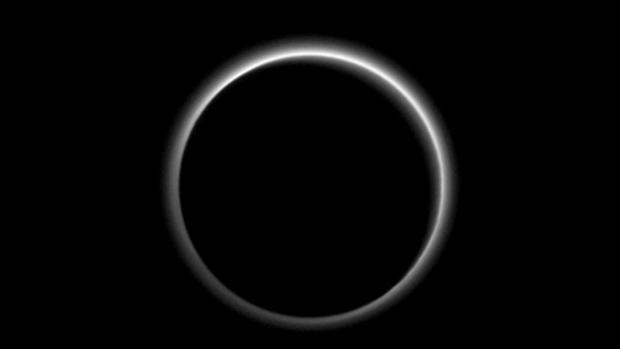 The dramatic black-and-white image reveals layers of haze surrounding the planet that are several times higher than what scientists had anticipated, NASA said.

In the photo, sunlight can be seen streaming through the atmosphere, revealing hazes as high as 130 kilometres above Pluto's surface, NASA said. An initial analysis shows that there are two distinct layers of haze – one about 80 kilometres above the surface, and another at about 50 kilometres.

Previously, scientists had thought that temperatures would be too warm for hazes to form at altitudes higher than 30 kilometres above Pluto's surface.

New Horizons Principal Investigator Alan Stern said he was floored by the photo in more ways than one.

"My jaw was on the ground when I saw this first image of an alien atmosphere in the Kuiper Belt," he said in a statement. "It reminds us that exploration brings us more than just incredible discoveries – it brings incredible beauty."