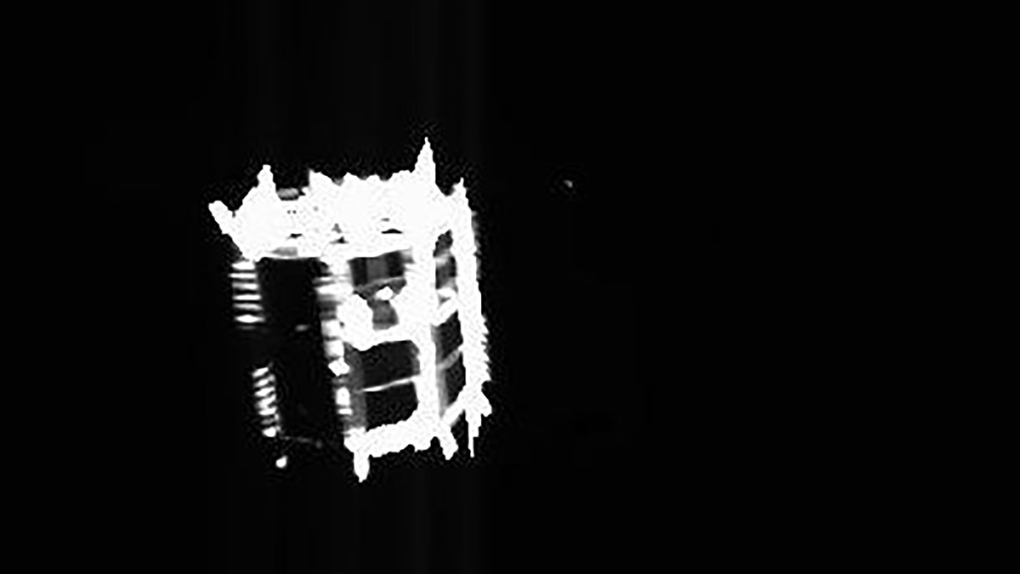 In this Oct. 3, 2019, image released by the JAXA, Japan Aerospace Exploration Agency, the rover MINERVA-II2 is captured by the wide-angle optical navigation camera (ONC-W2) immediately after separation. (JAXA / Chiba Institute of Technology via AP)

TOKYO -- Japan's Hayabusa2 spacecraft released a small rover on Thursday that will land on the surface of an asteroid as part its final mission before heading back to Earth, Japan's space agency said.

The Minerva-II2 rover began a slow descent to the asteroid Ryugu, the Japan Aerospace Exploration Agency, or JAXA, said.

Hayabusa2 arrived in the area in June 2018. It has collected soil samples and other data from the asteroid 300 million kilometres (180 million miles) from Earth in a series of missions aimed at obtaining clues to the origin of the solar system.

The spacecraft released the rover, which resembles a circular cookie tin, from about 1 kilometre (0.6 mile) above the asteroid's surface. It will collect data and images of the rover as it desends over the next few days to Ryugu -- named after a dragon castle in a Japanese folk tale -- to research the asteroid's gravity.

It is the last mission for the hugely popular spacecraft, whose name means falcon.

Hayabusa2 is to start its yearlong return trip to Earth later this year.

Hayabusa2 itself landed on the asteroid twice, despite difficulties caused by Ryugu's rockier-than-expected surface, which provided limited landing possibilities. In the first touchdown in February, it collected surface dust samples. In July, it collected underground samples for the first time in space history after landing in a crater it earlier created by blasting the surface.

JAXA scientists believe the underground samples contain valuable data unaffected by space radiation and other environmental factors that could tell more about the origin of the solar system billions of years ago.

Asteroids, which orbit the sun but are much smaller than planets, are among the oldest objects in the solar system and may help explain how Earth evolved.